Only 36 teams and two weeks remain in this MHSAA Football Playoffs, and the third round is something of a turning point.

But as we prep for trips Saturday to Marquette for 8-player and neutral sites all over the Lower Peninsula for 11-player, and then to Ford Field in 10 short days, let’s take a few more minutes to appreciate a weekend that saw 10 games decided by eight points or fewer and five 2020 finalists defeated as this year’s contenders took another step.

HEADLINER Suttons Bay 42, Rudyard 36 (OT) The Norseman (12-0) earned their third-straight Division 1 championship game appearance with a game-tying touchdown with 20 seconds left in regulation and the winning score (and defensive stand) in overtime. Rudyard did complete its longest playoff run since 1982 at 9-3, improving substantially on three straight sub-.500 finishes with its most wins since 2009. Click for more from the Traverse City Record-Eagle.

HEADLINER Adrian Lenawee Christian 36, Martin 14 The reigning champion Cougars (12-0) are headed back to the Division 1 Final as well thanks to a 22-0 second-half run led in part by quarterback Ashur Bryja. Lenawee Christian actually scored the final 30 points, capitalizing on a Martin miscue on the last play of the second quarter to get back to even at halftime. The Clippers (11-1) ended their second-straight trip to the Semifinals with their winningest season since 1987. Click for more from the Adrian Daily Telegram.

HEADLINER Powers North Central 73, Marion 8 The Jets (12-0), despite playing only 11 games on the field (one win was a forfeit), are approaching 700 points this season, and this was their season high. Coincidentally, North Central is scoring nearly the same number of points per game (only seven tenths of a point more) than during last season’s undefeated Division 2 title run. This was Marion’s second-straight trip to the Semifinals, and the Clippers (10-2) finished with their most wins since 1992. Click for more from the Escanaba Daily Press.

HEADLINER Colon 42, Au Gres-Sims 6 The Magi (11-1) have played and defeated three previously-unbeaten teams during this playoffs, with this their most substantial win of the set. Quarterback Simon Vinson either ran or threw for a combined five touchdowns, and Colon will look to add a second championship in three seasons after winning Division 1 in 2019. The Wolverines (11-1) completed an incredible turnaround season, having gone 11-1 as well in 2018 but then 3-6 in 2019 and 1-6 a year ago. Click for more from the Sturgis Journal.

HEADLINER Grand Blanc 28, Rockford 27 The Bobcats clinched their first trip to the Finals, and with an exciting finish. Grand Blanc (12-0) scored go-ahead touchdowns four times and Rockford answered all four, but couldn’t add a two-point conversion after pulling within a point of the lead with 55 seconds to play. Elijah Jackson-Anderson ran for two scores for Grand Blanc, and Zak Ahern ran for all four for Rockford (11-1). Click for more from the Flint Journal.

Regional Roundup Rochester Adams 14, West Bloomfield 13 This was closer than Adams’ 35-17 opening-night win over the reigning Division 1 champion, and required the Highlanders (12-0) to come back from a 13-0 halftime deficit while holding the Lakers (10-2) scoreless over the final two quarters. Sterling Heights Stevenson 27, Macomb Dakota 20 This also was a rematch, with Stevenson (10-2) adding to its Week 5 win over Dakota (8-4) thanks in part to a 90-yard fumble return TD by Jordan Ramsey. Belleville 12, Dearborn Fordson 7 The Tigers (11-1) clinched their fourth-straight Regional title with a second win this season over Fordson (9-3), with freshman Bryce Underwood throwing two touchdown passes to Deshaun Lee.

HEADLINER Traverse City Central 42, Caledonia 14 Not much has slowed the Trojans (11-1) over the last three months, and they claimed their second-straight Regional title amid a blizzard with Josh Burnham leading the way with four rushing touchdowns. The Fighting Scots had been giving up only 13 points per game, but Central put up at least 42 for the sixth straight week. Caledonia finished 10-2, their winningest season since 2008.  Click for more from the Traverse City Record-Eagle.

Regional Roundup South Lyon 29, Portage Central 23 (OT) The Lions (12-0) scored and converted a two-point pass with 18 seconds left in regulation to force overtime, then went on to clinch their first Regional title since 2004. Portage Central (9-3) finished its winningest run since 2016. Livonia Franklin 43, Waterford Mott 26 The Patriots’ story just keeps getting better as they improved to 7-5 with their fourth-straight win. Mott finished a nice turnaround season at 7-5 after going 2-4 a year ago. Warren De La Salle Collegiate 45, Roseville 14 The Pilots (11-0) have won all but one of their games this season by double digits, and this one ranks high as Roseville (7-5) had given up more than 15 points once this fall and had scored fewer than 35 points only three times.

HEADLINER Mason 20, Bloomfield Hills Brother Rice 17 Freshman Cason Carswell’s touchdown pass to Derek Badgley with 10 seconds to play lifted the Bulldogs (10-2) to their first Regional championship and first 10-win season. Carswell threw for two scores total, and Mason’s defense slowed a Brother Rice offense that had averaged 30 points per game entering the evening. The Warriors (8-4) were coming off their first District title since 2014 and finished with their winningest campaign since that fall. Click for more from the Lansing State Journal.

HEADLINER Chelsea 27, Detroit Country Day 20 Arguably the most jaw-dropping play of the weekend decided this Regional Final, as Chelsea blocked a late Country Day field goal attempt and Jason Skoczylas brought it back for the game-winning touchdown. Chelsea (12-0) advanced to the Semifinals for the fourth consecutive season, with this their first single-digit win of the fall. The reigning champion Yellowjackets (7-4) had played in the last two Division 4 Finals. Click for more from the Ann Arbor News.

Regional Roundup Hudsonville Unity Christian 53, Cadillac 22 The Crusaders (12-0) reached 50 points for the fifth-straight week while ending the season for last year’s Division 4 runner-up – although the Vikings (9-3) did finish with their most wins since 2014. Edwardsburg 28, Grand Rapids South Christian 14 The Sailors (8-4) were able to hold the Eddies to their fewest points scored this season, but Edwardsburg (12-0) continued its streak of all double-digit wins this fall. Freeland 42, Croswell-Lexington 22 The Falcons (11-1) repeated as Regional champions, pulling away with 20 unanswered points in the second quarter. The Pioneers (10-2) hadn’t fallen since Week 1 and finished with double-digit wins for the first time since 2012.

HEADLINER Frankenmuth 33, Kingsley 18 The Eagles (12-0) repeated as Regional champs by scoring the game’s final 19 points over the last 20 minutes. The teams combined for only 378 yards and Kingsley (10-2) had given up more than 20 points only one other time this fall. But Frankenmuth’s Cole Lindow scored both of his touchdowns during that closing run and managed 127 yards on the ground. Click for more from the Saginaw News.

After a slow start, @ColeLindow got loose in the 2nd half, becoming the 2nd leading rusher in Frankenmuth history! The senior finished with 127 yards and 2 TDs (35, 18) in the regional title win over Kingsley@FMuthAthletics @FrankenmuthF #StateChamps x @MHSAA pic.twitter.com/6CB8oK7rHj

Regional Roundup Grand Rapids Catholic Central 25, Muskegon Oakridge 6 The Cougars (12-0) navigated a blizzard as well to win a sixth-straight Regional title as both teams scored season lows. Oakridge finished 9-3, all three defeats to District champs. Portland 21, Kalamazoo United 0 The Raiders are headed back to the Semifinals for the first time since 2018 after shutting down a Titans offense that averaged 39 points per game heading into the day. United finished 8-4. Marine City 21, Corunna 14 The Mariners (12-0) still haven’t given up more than 14 points this season, holding off a late rally this time to win their second Regional title in four years. Corunna (7-5) concluded its best season since 2016.

HEADLINER Lansing Catholic 31, Montague 13 The reigning champion Wildcats scored first, but Lansing Catholic (11-1) then ran off 31 unanswered points on the way to earning a third-straight Regional title. Montague finished 8-4, having rebounded to win a fifth-straight District title after losing its final two games of the regular season. Click for more from the Lansing State Journal.

Regional Roundup Standish-Sterling 34, Calumet 7 The Panthers continued another of the incredible turnarounds this fall, improving to 10-2 with their first Regional title since 2008 after going 1-6 last season. Calumet’s nine-game winning streak was halted, but the Copper Kings rebounded impressively after an 0-2 start. Michigan Center 27, Clinton 14 After falling in a Regional Final last season, the Cardinals (11-1) took the next step earning their first Semifinal berth and did so against last season’s Division 6 runner-up. Clinton finished 9-3. Warren Michigan Collegiate 38, Ecorse 16 The Cougars also followed up a Regional loss last season by advancing this time, scoring the most points given up by an Ecorse defense that had allowed only 11 per game on average. The Raiders finished 8-4, improving on their 2-5 finish from a season ago.

HEADLINER Lawton 41, Muskegon Catholic Central 22 The Blue Devils are enjoying their best season, and this might have been the highlight so far. Lawton won its first Regional title, handing the perennial power Crusaders (10-2) just the second defeat of their best season since 2016. Lawton (12-0) already had set a program record for wins with the District Final victory the week before. Click for more from the Kalamazoo Gazette.

Regional Roundup Traverse City St. Francis 48, Ishpeming Westwood 20 The reigning Division 7 runner-up Gladiators (12-0) broke away in the second half, outscoring the Patriots 27-6 during the final two quarters. Westwood finished 10-2, its first season with double-digit wins, and also earned its first District title. Pewamo-Westphalia 20, Elkton-Pigeon-Bay Port Laker 0 The Pirates (12-0) posted their fifth shutout of the season, lowering their points allowed average to 5.6 per game. Laker finished 9-3, five wins better than a season ago. Jackson Lumen Christi 35, Detroit Loyola 18 The Titans (11-1) won their fifth Regional title in six seasons, outscoring the Bulldogs 14-0 during the second half. Loyola finished 6-5, having reached the Regional Finals for the third-straight season despite opening 2-3. 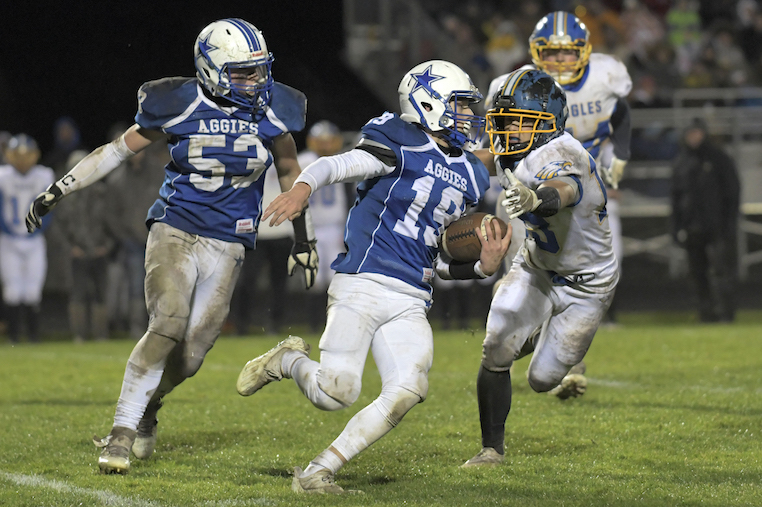 HEADLINER Hudson 8, White Pigeon 0 The Tigers’ defense came through again when it counted most, posting its seventh shutout as they won their first Regional title since 2011. Hudson (12-0) lowered its points allowed average to 5.8 per game, stopping an offense that averaged 38 points per entering the day. White Pigeon finished 10-2, reaching double-digit wins for the first time since 1980. Click for more from the Adrian Daily Telegram.

Regional Roundup Beal City 34, Carson City-Crystal 14 The Aggies (11-1) have won 11 straight and now their second Regional title in three seasons. The Eagles (10-2) reached double-digit wins for the first time since 2013. Ubly 65, Breckenridge 6 The reigning Division 8 runner-up Bearcats (12-0) are a win away from returning to Ford Field after going over 50 points for the fifth time in 11 games played on the field (one win was by forfeit). Breckenridge finished 9-3 with league and District titles. Ottawa Lake Whiteford 38, Clarkston Everest Collegiate 12 The Bobcats (11-1) are headed back to the Semifinals for the first time since 2017. Everest finished 9-3, reaching nine wins for the fifth time in six seasons.