Michigan high school football has been ripe for a fresh start after a COVID-rattled 2020 (and into 2021) season.

Win or lose this past weekend, nearly 600 varsity football teams across the state should continue to have plenty to look forward to this fall – and of course, some have a few more reasons for early excitement.

Four of last season's champions fell, which meant big headlines for Rochester Adams, Edwardsburg, Jackson Lumen Christi and Niles Brandywine. Three showcase events further fed anticipation as top teams gave us first looks at what we can expect over the next three months.

Below is our look back at Week 1 and some of the results that could matter most as we start another 14-week championship chase.

Watch list Millington 42, Cass City 19 The Cardinals are carrying the longest current streak of winning seasons (32) in the state, but doubling up a Cass City team that came within two points of making last season’s Division 7 championship game has to be one of Millington’s best opening wins during that streak.

Remember this one Hemlock 33, Breckenridge 8 Hemlock’s Huskies are looking to take another step after three-straight eight-win seasons and only one loss a year ago, and downing Breckenridge’s Huskies in this fashion is a notable.

More shoutouts Freeland 24, Clare 14 The Falcons enjoyed another great start after making the Semifinals last season, against a Clare team that lost only in the playoffs. Saginaw Nouvel 21, Sandusky 6 The Panthers also enjoyed a solid start against a Sandusky team coming off a one-loss season.

HEADLINER Clinton Township Chippewa Valley 45, Detroit Catholic Central 20 This Xenith Prep Kick Off Classic matchup featured two are sure to be counted among Division 1 title contenders in two months, and Chippewa Valley’s start is especially impressive coming off a 3-4 finish a year ago. Cephus Harris scored four touchdowns as one of many standouts for the Big Reds, while DCC QB Declan Byle made some big-play throws that surely will have defenses on notice. Click for more from the Macomb Daily.

Ryan Schuster (@ryanschuster_10) with the screen pass again to Cephus Harris (@Cephus_harris3) and he goes in for another TD in the 1st half as Chippewa Valley went on to beat Detroit Catholic Central 45-20 at the Prep Kickoff Classic. @CVBigReds @detpkc

Watch list Rochester Adams 35, West Bloomfield 17 The memory of last season’s 3-4 finish for Adams should be drifting away after the Highlanders downed the reigning Division 1 champion, avenging a 37-0 defeat and breaking a four-game losing streak against the Lakers.

Remember this one Clarkston 29, Davison 26 Both lost just once last season – Davison in the Division 1 championship game and Clarkston in a District Semifinal – and it would hardly be shocking to see them meet up again in November. This time, Davison led at halftime and Clarkston came back and then held off a late rally.

More shoutouts Dearborn Fordson 38, Canton 23 The Tractors also earned an impressive win over a team that lost just once last season – and Antonio Gates Jr. was just fun to watch with two touchdown catches and two interceptions. Bloomfield Hills Brother Rice 35, Macomb Dakota 21 Two traditional powers, another big-time opener – and this one saw Rice take a 21-0 lead, Dakota tie it in the fourth quarter and Rice then pull away.

HEADLINER DeWitt 47, Traverse City Central 27 With a star quarterback and two college-bound receivers back from last season’s Division 3 championship team, DeWitt’s offense wasn’t going to sneak up on anyone. But the Panthers’ playmakers were among the most impressive of Battle at the Big House performers as quarterback Tyler Holtz connected with three receivers for six touchdown passes total, including four to Bryce Kurncz. Central had given up only 18.7 points per game last season in reaching the Division 2 Semifinals. Click for more from the Lansing State Journal.

Watch list Williamston 43, Croswell-Lexington 20 The Hornets reached the Division 4 Semifinals last season, and they rolled out of the gate again with this road win over a Croswell-Lexington team that lost to only one opponent (twice) in 2020.

Remember this one Charlotte 49, Olivet 40 Olivet has been the more football successful of these neighbors for going on two decades, and they only started playing each other last season for the first time at least in recent history. But Charlotte won’t be forgetting this one any time soon after winning two games a year ago and falling to the Eagles 28-14 in that 2020 meeting.

More shoutouts Grand Ledge 36, Coldwater 14 The Comets also may have set the stage for a big season with a strong road win against a Coldwater program that regularly is among contenders in its league. Lansing Eastern 36, Flint Hamady 0 The Quakers didn’t play at all last season, and their two wins in 2019 were also their only two over a five-season stretch. But Eastern came out big against a Hamady team that hasn’t finished less than .500 since 2014.

HEADLINER Cadillac 18, Reed City 14 The reigning Division 4 runner-up Vikings should make a run at being the top team from the northern Lower Peninsula, and this victory should be a pretty strong catalyst with Traverse City West and Central looming in league play. Cadillac held the Coyotes scoreless over the second half, and the defeat was only the fifth for Reed City during the regular season over the last seven years. Click for more from the Cadillac News.

Remember this one Traverse City West 35, Midland 28 The Titans won’t be forgetting an impressive comeback including a go-ahead 82-yard punt return touchdown at U-M.

More shoutouts Maple City Glen Lake 35, Houghton Lake 6 Both had winning records and close playoff defeats to end last season, and the Lakers’ offense looks to be humming again. Lake City 30, Beaverton 21 The Trojans had a tough go in 2020, finishing just 2-5 after three winning seasons in a row, but they could be on the move again after edging a Beaverton team coming off a fifth-straight winning campaign.

HEADLINER Jackson Lumen Christi 27, New Lothrop 14 The southeastern section of the Lower Peninsula was loaded with notable finishes, but Lumen Christi toppling the reigning Division 7 champion made the biggest statewide wave. The Titans broke away for the game’s final two scores and stopped a Hornets offense that scored at least 36 points per game in going 11-0 last fall. Click for more from the Jackson Citizen Patriot.

Watch list Ottawa Lake Whiteford 52, Blissfield 21 Whiteford always is in the title mix in the Tri-County Conference, and downing the reigning Lenawee County Athletic Association champ is a great way to prep for another run.

Remember this one Hudson 59, Ithaca 14 Last year’s matchup between the programs owning the longest winning streaks in MHSAA history wasn’t played due to the late season start. But Hudson stormed back to even the recent series after losing to Ithaca in 2019 – a major win as the Tigers go for their first winning season since 2017. 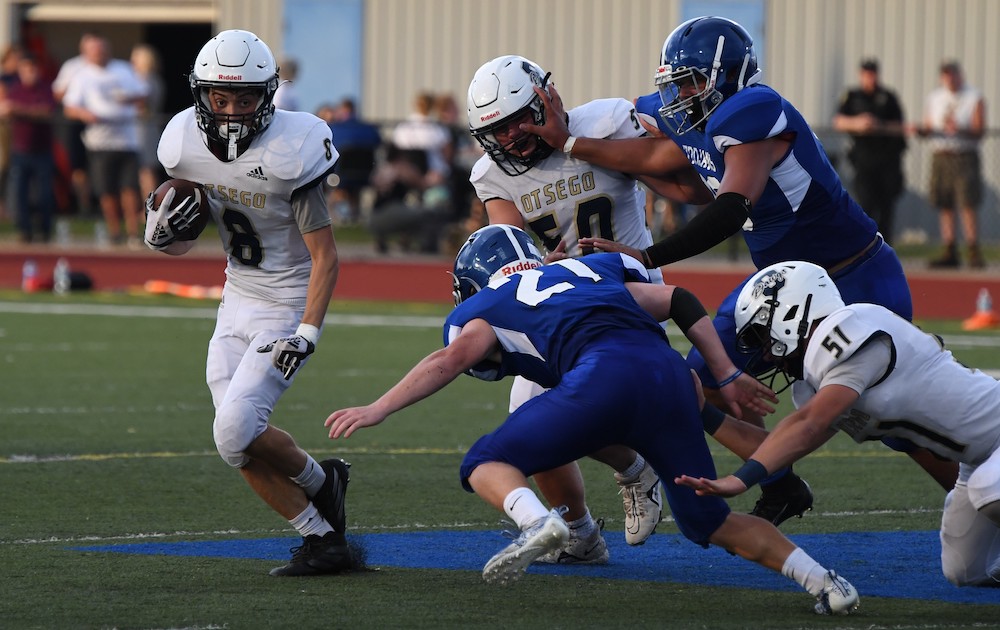 HEADLINER Niles Brandywine 38, Centreville 32 The Bobcats have been a playoff team for most of the last decade and went 9-1 in 2019. This opening win certainly could spur more big things this fall. Centreville gave up 29 points total in going 11-0 and winning the Division 8 championship last season. Click for more from the Niles Daily Star.

Watch list Edwardsburg 38, Montague 0 Few have slowed down the Eddies’ offense over the last eight years – they scored more than 400 points in all of them – and this seems a strong indicator that things will continue along that track. The defense also deserves plenty of credit for shutting out the reigning Division 6 champ.

Remember this one Stevensville Lakeshore 26, Portage Central 22 The season is just getting started, but a Lakeshore go-ahead touchdown with 10 minutes to play could mean a lot in the final Southwestern Michigan Athletic Conference standings.

More shoutouts Battle Creek Central 12, Portage Northern 6 This is a huge start for the Bearcats. Northern had won the last seven matchups between the two, including last season’s by 40, and went undefeated in league play in 2020 although the SMAC didn’t award a champion because of the abbreviated regular season. Cassopolis 20, Schoolcraft 19 After four straight double-digit win seasons, the Rangers fell back to 2-5 last fall. But defeating a Schoolcraft team coming off a Division 7 Semifinals trip may have begun a fast rebound.

HEADLINER Iron Mountain 14, Negaunee 12 These Western Peninsula Athletic Conference rivals had to take a year off from their annual game because of the shortened 2020 season, but they continued what’s become a series of close finishes – this the third straight decided by three points or fewer. Iron Mountain has won all three, which in this case again means a significant start to the Copper division season. Click for more from the Iron Mountain Daily News.

Watch list Gladstone 26, Calumet 20 (OT) The Braves won their season opener for the fifth year in a row, and the timing of this big victory couldn’t be better – four straight league games are up next.

Remember this one Ishpeming 22, Manistique 6 The Hematites didn’t play a game last season, but they returned with a victory by the identical score of their 2019 opener against Manistique.

More shoutouts Bark River-Harris 28, Gwinn 6 Bark River-Harris closed last season winning five of its last six and making a Division 8 District Final, and they may be back in stride. Ishpeming Westwood 52, Houghton 8 The Patriots extended their winning streak against Houghton to four, setting up this week’s league showdown with the Mountaineers. 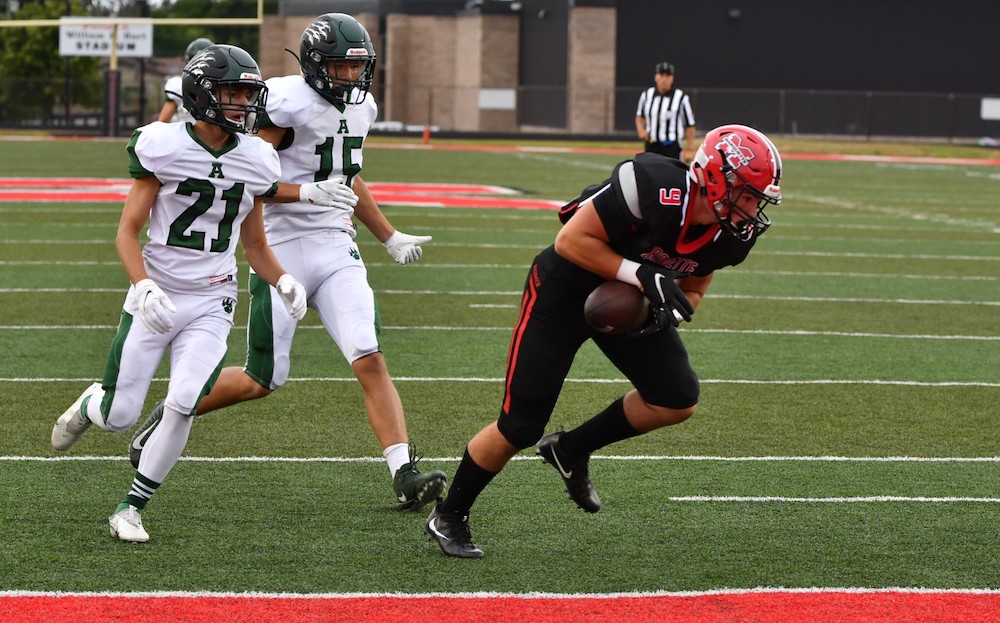 HEADLINER Grand Rapids Catholic Central 43, Lapeer 21 The reigning Division 5 champion opened the season for the whole state with a noon Thursday kickoff at the Battle at the Big House, and looked like they’d just left Ford Field in January. QB Joey Silveri threw for two scores and ran for two more, and Nolan Ziegler caught three touchdown passes. Click for more from FOX 17.

Watch List Zeeland West 44, East Grand Rapids 27 The Dux have won eight straight season openers and now have an open week before beginning play in what might be the toughest league in the state this season, the Ottawa-Kent Conference Green.

Remember this one Caledonia 41, Holt 14 The Rams are expected to be one of the Lansing area’s best this fall – which means this could turn out to be an even more impressive start for Caledonia.

HEADLINER Marion 42, Merrill 12 The Eagles quietly have strung together five winning seasons in a row and made an impression in their first game since last season’s Division 2 Semifinal loss to eventual champion Powers North Central. Merrill was one of the best 8-player Division 1 teams in its first season playing the format in 2020. Click for more from the Cadillac News.

Watch list Pickford 36, Gaylord St. Mary 6 One game is merely that, but if history holds this would seem to indicate Pickford is a team to watch again in Division 1.

Remember this one Genesee 56, Mayville 52 The Wolves ended last season with a 48-20 playoff-opening loss to Mayville.

More shoutouts Blanchard Montabella 54, Bellevue 18 The Mustangs made a late move to 8-player this offseason and are three students too large to qualify for the playoffs – but their 8P debut will be remembered regardless if they continue to rebound from last year’s 1-5 finish in 11-player. Rogers City 14, Brethren 8 The Hurons won five games total over their last two seasons of 11-player, but debuted in 8-player with a win over a solid Brethren program coming off a third-straight finish at .500 or better.

PHOTOS: (Top) Niles Brandywine’s Ivory McCullough works to break the grasp of Centreville’s Xander Frederick during Thursday’s win. (Middle) Plainwell won its 120th meeting with Otsego, 21-6. (Below) Alpena's Joseph Blewett (21) and Mason Mumford (15) aren't able to get to Marquette's Justin Jurmu in time as Jurmu pulls in a pass from quarterback Austin Ridl to score their team’s first touchdown Thursday. (Top photo by Michael Caterina/South Bend Tribune, middle by Gary Shook, and below by Cara Kamps.)