For a lot of reasons – two big ones in particular – this football regular season had a different feel to it.

And one of those was magnified significantly during Week 9.

Of course, we’ve rolled through the fall almost “normally” after the 2020 season had to hurdle various COVID-related adjustments.

But the biggest football-related change this fall dealt with the first year of playoff qualification using the enhanced strength-of-schedule formula instead of automatic qualification by win total.  And with that switch, eyes were glued to the MHSAA playoff-point webpage from Thursday night through about 11 p.m. Saturday, watching every adjustment as we arrived with our 288-team field.

A lot of moving parts went into those final calculations, and the results below had leading roles.

HEADLINER Ubly 25, Bad Axe 13 The Bearcats (9-0) won a matchup of Greater Thumb Conference champions, representing the East in victory over one of the three co-champs from the West in the Hatchets (7-2). Ubly also locked up one of two perfect regular seasons in Division 8 – its first undefeated regular season since 2016 – to add to a run that has seen the program go 62-16 over the last seven years. Click for more from the Huron Daily Tribune.

Watch list Marine City 21, Pontiac Notre Dame Prep 10 The Mariners (9-0) moved up to No. 2 in Division 5 playoff points, finishing with one of six perfect regular-season records in that bracket. Four wins came against teams in Division 3 and 4, including Notre Dame Prep (7-2).

Remember this one Lapeer 38, Davison 35 While the Lightning (7-2) locked up a Division 1 playoff spot, Davison (5-4) just missed the postseason for the first time since 2014, adding another layer to an always highly-anticipated rivalry game.

More shoutouts Flint Kearsley 35, Armada 27 The Hornets started 2-3 but won four straight to return to the Division 3 playoffs, over an Armada team that at 6-3 is back in the playoffs for the first time (not counting the all-in 2020) since 2004. Frankenmuth 28, New Lothrop 14 Both are hoping to return to Ford Field, New Lothrop (6-3) the reigning Division 7 champion and Frankenmuth (9-0) the returning Division 5 runner-up and coming off a second-straight perfect regular season. 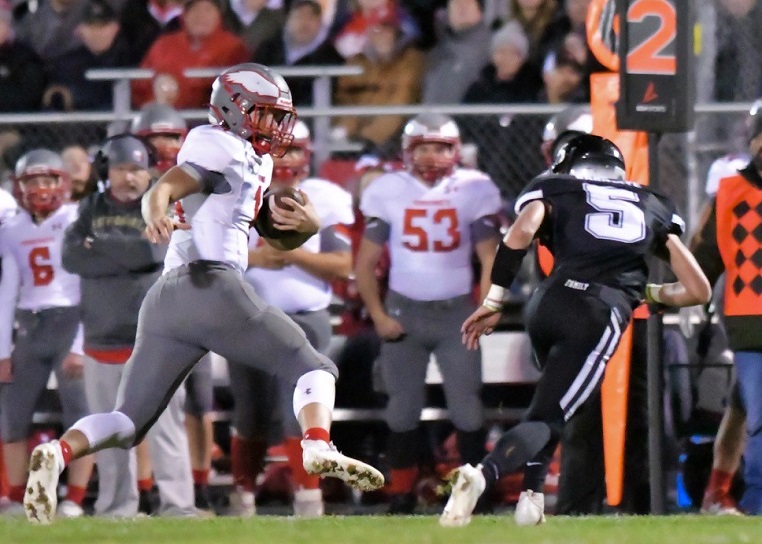 HEADLINER Gibraltar Carlson 28, Brownstown Woodhaven 14 Carlson’s first win over Woodhaven (8-1) since 2017 netted the Marauders a share of the Downriver League championship, their first since sharing with Woodhaven in 2018, and also pushed Carlson (8-1) up to No. 3 in the final Division 3 ranking. Three Cody Britt rushing touchdowns were among the difference-makers. Click for more from the Southgate News-Herald.

Watch list Detroit Cass Tech 40, Orchard Lake St. Mary's 7 Eyes across the state were watching the Division 1 playoff list as scores came in Friday night, knowing the Technicians (6-3) had won big Thursday but still were on the edge of qualifying. Downing the Division 3-qualifying Eaglets (5-4) provided the necessary bump for Cass Tech to lock up a postseason spot.

Remember this one Belleville 46, Hartland 9 Since falling to Livonia Churchill in Week 3, Belleville (8-1) has won six straight including to clinch the Kensington Lakes Activities Association East and now overall titles. This win over the Eagles (7-2) tied for its biggest playoff points bump of the season.

More shoutouts Oxford 29, Clinton Township Chippewa Valley 28 The Wildcats (5-4) ran their winning streak to four with three of those wins by one score and two by one point, this time against a Chippewa Valley team (6-3) with three losses by a combined nine points. Madison Heights Bishop Foley 43, Clarkston Everest Collegiate 37 Jackson Zeiter caught two touchdown passes, ran for a third score and returned a kickoff for another in the Detroit Catholic League Cardinal championship game. 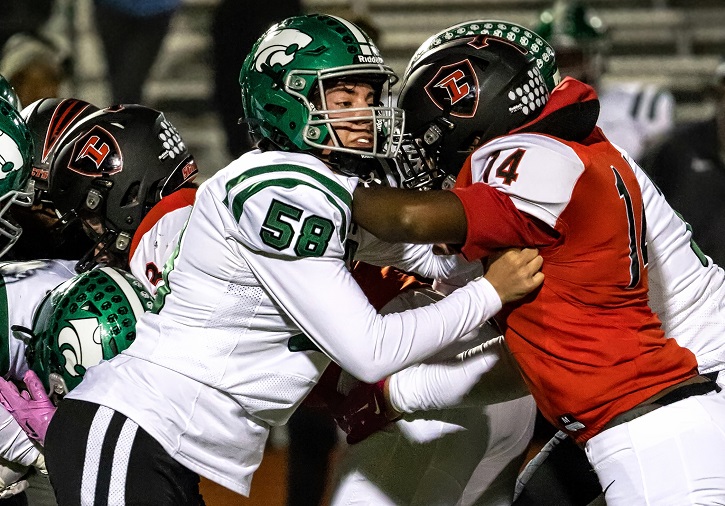 HEADLINER Pewamo-Westphalia 12, Lansing Catholic 7 The Pirates pushed the go-ahead score across midway through the fourth quarter to add one of their most impressive wins to a run of 60 regular-season victories over their last 62 games going back to 2015. P-W not only handed Division 6 top-ranked Lansing Catholic (8-1) its lone loss, but the Division 7 No. 5 Pirates (9-0) avenged last season’s 28-13 defeat against the Cougars. Click for more from the Lansing State Journal.

Watch list Portland 31, Montague 7 The Raiders (7-2) earned their second win this season over a reigning Finals champion, adding this victory over Division 6 Montague (6-3) to the Week 2 edging of Division 3 DeWitt.

Remember this one Ionia 35, Lake Odessa Lakewood 14 The Bulldogs’ third-straight win in this annual Week 9 rivalry game meant more this season as it sent Ionia (5-4) into the Division 3 playoffs with their first (not counting 2020) berth since 2013.

More shoutouts Holt 34, Grand Ledge 6 The Rams (7-2) made it three wins in their last four games against the rival Comets (6-3), this one helping Holt finish second in the final Capital Area Activities Conference Blue standings. DeWitt 50, Stevensville Lakeshore 14 The CAAC Blue champ Panthers (8-1) added another impressive nonconference win against a Lakeshore team (6-3) they could see again in a Division 3 Regional Final. 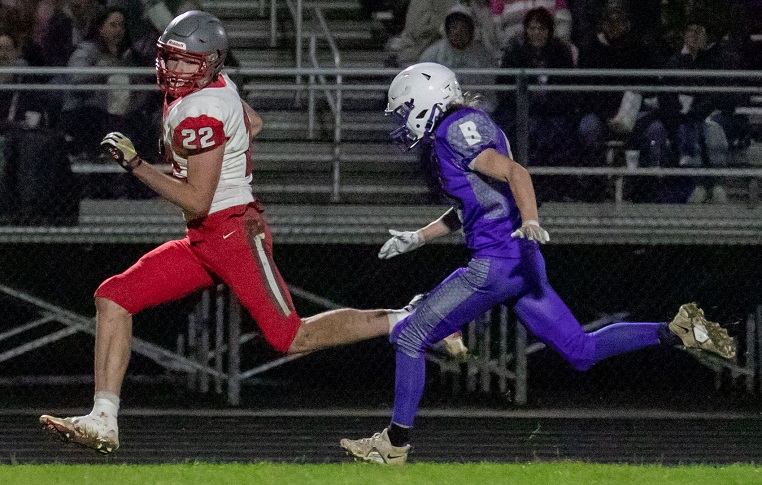 HEADLINER Traverse City St. Francis 38, Kingsley 30 The winner-takes-all matchup for the Northern Michigan Football Conference Legends championship was everything it was billed, with St. Francis (9-0) regaining the title after Kingsley (8-1) had won the last two. The Gladiators were behind 16-0 early, then up 16 into the fourth quarter before holding off a late rally to finish their first undefeated regular season since 2018. Click for more from the Traverse City Record-Eagle.

Watch list East Jordan 22, Frankfort 18 This one easily could’ve been considered the region’s “headliner” as well as East Jordan also won a winner-take-all NMFC matchup, to claim the Legacy title, and in doing so also clinched the final playoff spot in Division 7.

Remember this one Maple City Glen Lake 20, Mancelona 6 The Lakers (4-5) appeared all but done after a 1-5 start. But those defeats came against an eventually undefeated team, three with still one loss and another now at 6-3 – and defeating Mancelona (5-3) earned Glen Lake the second-to-last playoff spot in Division 6.

HEADLINER Jonesville 20, Addison 14 The Comets completed their first perfect regular season since 1988 (according to Michigan-football.com) in this Big 8/Cascades champions crossover, in doing so handing Addison (8-1) its lone loss. Defense reigned as both teams were held to season-low scoring totals. The win helped Jonesville (9-0) improve four spots to No. 11 in Division 6, but didn’t move Addison from No. 3 in Division 8. Click for more from the Jackson Citizen Patriot.

Watch list Ottawa Lake Whiteford 62, Erie Mason 22 The Bobcats (8-1) eliminated the possibility of a shared Tri-County Conference championship, instead earning the title outright and finishing an in-state run of eight wins by at least 20 points. Their only loss this season was to Edon, Ohio.

Remember this one Ann Arbor Huron 31, Rochester 14 This season has been memorable and then some for the River Rats. Huron (8-1) moved up five spots to No. 10 in Division 1, and its eight wins tied as many as the program won from 2011-20 – and are the most in one season since 2001.

More shoutouts Parma Western 35, Richmond 17 The Panthers (6-3) held onto the No. 27 spot in Division 3, and Richmond (4-5) also kept its grip on a playoff spot in Division 5. Michigan Center 28, Reading 20 This Big 8/Cascades runner-up crossover capped another solid regular season for the Cardinals, whose only loss was by a point Week 4 to Addison.

Remember this one Mattawan 26, Battle Creek Central 6 After losing nine straight on the field between the end of last season and start of this one, the Wildcats (4-5) finished on a three-game winning streak (to go with a Week 4 forfeit victory) to gain the No. 29 spot in Division 3.

More shoutouts Niles Brandywine 44, Benton Harbor 32 After opening with a pair of solid wins including against reigning Division 8 champion Centreville, Brandywine (4-5) found itself outside the Division 7 playoff field before jumping up five spots to No. 28 with this victory. Parchment 38, Watervliet 27 The Panthers (6-3) have occupied the No. 32 spot in Division 5 four of the last seven weeks – and with this win, held onto it when it counted most. Watervliet (5-4) still tied for No. 29 in Division 6. 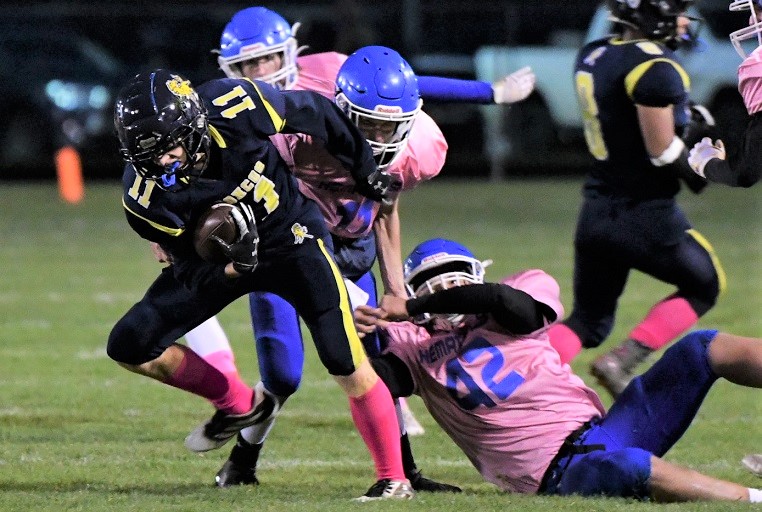 HEADLINER Ishpeming Westwood 32, Negaunee 14 The Patriots (8-1) locked up a shared Western Peninsula Athletic Conference Copper championship with Calumet, putting up the most points Negaunee has given up in a game this season while holding the Miners (7-2) to their fewest since Week 1. The championship was Westwood’s first since 1992 in the Mid-Peninsula Conference. Click for more from Upper Michigan Source.

Watch list Kingsford 34, Menominee 27 The Flivvers (6-3) hadn’t played a Great Northern Conference game since Week 5, but came back to finish off the regular season by keeping Menominee (5-4) from an outright league title and turning the championship into a three-team share with these two and Marquette.

Remember this one Bark River-Harris 26, Ishpeming 0 The Broncos (6-3) finished a perfect run through the West-PAC Iron with this winner-take-all championship game victory.

More shoutouts Calumet 53, L'Anse 32 As noted above, this gave the Copper Kings (7-2) a share of the Copper championship, their first since 2018. Marquette 17, Petoskey 14 Not only did it get to celebrate a league championship, but Marquette moved to 7-2 for the second-straight season to again tie its winningest going back to 2010.

HEADLINER Muskegon Catholic Central 30, Muskegon Oakridge 28 They aren’t quite neighbors, but made the 10-mile drive again for the first time since back-to-back games in 2015 and 2016 in another matchup of league champions. MCC (8-1) made the return trip home having represented the Lakes 8 Activities Conference well with a close victory over Oakridge (7-2), one of three co-winners of the West Michigan Conference title. Joe Waller ran for the tying touchdown and then two-point conversion winner with nine seconds to play. Click for more from the Muskegon Chronicle.

More shoutouts Cedar Springs 38, Grand Rapids South Christian 32 The Red Hawks (7-2) bounced back from a one-point Week 8 loss to Grand Rapids Catholic Central to win another close one, over the Sailors (6-3). Grand Rapids Christian 48, Grand Rapids Northview 17 The Eagles (6-3) moved up for the third-straight week with this win, to No. 7 in Division 4, while making Northview (4-5) the last team eliminated from joining the Division 3 field.

HEADLINER Morrice 60, Deckerville 18 The Orioles (9-0) secured their fifth North Central Thumb League title in five seasons and second-straight in the Stars division while also handing Deckerville (7-1) its lone loss of the fall. Morrice shut down an Eagles offense that entered averaging 56 points per game, and with the win jumped five spots to No. 1 in Division 2. Click for more from WILX.

Watch list Adrian Lenawee Christian 41, Britton Deerfield 20 The Cougars (9-0) won this matchup of undefeated teams, but it could’ve been only chapter one – they may face again in a Division 1 Regional Final, although Britton Deerfield (8-1) opens this week on the road at Deckerville.

Remember this one Powers North Central 42, Crystal Falls Forest Park 0 These two have build quite a rivalry over the last decade, and this meeting gave the Jets the outright Great Lakes Eight Conference West championship and their sixth shutout on the field this fall. North Central has given up 13 points total over eight games.