Stopping the Muskegon High School offense has never been easy.

This year, it’s twice as tough.

The Big Reds, 9-1 and ranked No. 1 in the season-ending Associated Press Division 3 poll, are attacking opponents with a two-headed monster at quarterback – diminutive senior Kalil Pimpleton (5-7, 160) and physically imposing junior La’darius Jefferson (6-2, 210).

“I’m blessed with two great men, two great leaders, at quarterback,” said seventh-year Muskegon head coach Shane Fairfield, whose team won the Ottawa-Kent Conference Black title. “Using both of them makes us a better team. We don’t go into games with a specific plan for when each will play (quarterback). We see what the defense is doing and how our kids are responding and go from there.”

The result of the dual QB attack has been a Muskegon offense which is averaging 54 points and 428 total yards per game heading into Friday night’s Division 3 District championship game against visiting East Grand Rapids (8-2).

Pimpleton, who has run a 4.4 in the 40-yard dash and has verbally committed to Virginia Tech, has started all 10 games for the Big Reds.

He is primarily a running threat, regularly taking snaps out of the pistol formation from senior center Devin Sanders and then finding a seam somewhere along the line to squeeze through. “KP,” as he’s known, has carried 101 times for 1,081 yards and 17 rushing touchdowns. He also has been effective through the air, completing 34 of 66 passes for 639 yards and six more TDs.

“I look at the system we use as a chance for me to use all of my weapons,” said Pimpleton, who also has three punt returns for touchdowns on his resume. “It doesn’t matter if I am at QB or in the slot. My character doesn’t change, and my focus doesn’t change.”

As good as Pimpleton has been, there have been times in recent years where opponents have bottled up Muskegon’s running quarterbacks.

One example was the 2014 Division 3 championship game at Ford Field, where Orchard Lake St. Mary’s shut down the Big Reds in a 7-0 victory. Another was last year’s Division 2 Regional championship game at Lowell, where Pimpleton and the Muskegon attack got stuck in the mud in a 36-7 loss. 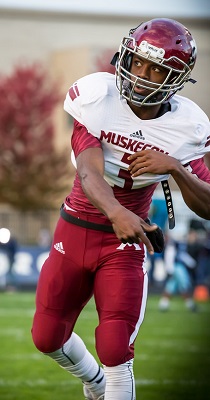 If that same scenario begins to unfold this fall, Muskegon offensive coordinator Brent White has a Plan B.

And what a Plan B it is.

Jefferson, who has the look of Cam Newton and the big arm to match, presents a whole new set of challenges for opposing defenses when he enters the game, which is normally around the Big Reds’ third offensive series. Jefferson brings a deep vertical passing threat, mixed with the size and strength to run over linebackers.

“I always tell myself that I can’t be stopped – that’s the mentality I like to play with,” said Jefferson, who also has delivered some big hits this fall during limited playing time at outside linebacker. “I just want to thank my coaches for using a two-QB system. Now we’ve got two hungry guys trying to win a state title.”

Muskegon’s offense struggled briefly in the early going before Jefferson ignited the Big Reds and their crowd with a 56-yard TD pass to Pimpleton, who had moved out to slot receiver. Near the end of the first quarter, Jefferson scored on a 2-yard run.

In the second quarter, it was back to Pimpleton at QB and he led a scoring drive, ultimately sprinting in from five yards out. And then it was back to Jefferson, who hit standout senior wide receiver Jacorey Sullivan on a 44-yard bomb over the top to complete Muskegon’s first-half scoring.

“The idea is that we have a system and our kids know how to play with either quarterback,” explained Fairfield. “If we do it right, it puts much more pressure on the defense, not knowing what they are going to get.”

Jefferson finished the win over Forest Hills Northern 7 of 8 passing for 175 yards and three touchdowns, along with 11 rushes for 91 yards and two more touchdowns. For the season, Jefferson has completed 42 of 69 passes for 724 yards and 15 touchdowns, against just two interceptions. He has rushed 66 times for 534 yards and 10 TDs.

The two quarterbacks are by far Muskegon’s top two rushers in an offense that lines up with four receivers on most downs. The lone starter in the backfield is senior Division I linebacker prospect Andrew Ward (6-1, 210), who is a devastating lead blocker. In recent weeks, the Big Reds have started to hurt opponents with jet sweeps featuring speedy juniors Da’vion McCall, Clinton Jefferson and Lonnie Clark Jr.

Fairfield, whose team has ripped off eight straight wins after a Week 2 loss to pass-happy Lincolnshire (Ill.) Stevenson, has guided Muskegon to MHSAA Finals three times in his first six years as head coach. The Big Reds have failed to take that final step on each of those occasions, falling to Birmingham Brother Rice in 2012 and 2013 and Orchard Lake St. Mary’s in 2014.

Given that recent heartbreak, the Big Reds have made it clear since Day 1 that the only acceptable outcome this season is an MHSAA title. The next challenge is a dandy matchup in Friday’s District championship game between two of the top tradition-rich programs in Michigan high school football history.

Muskegon is the state’s winningest with 816 wins and 17 state titles, including five in the MHSAA playoff era. East Grand Rapids, meanwhile, has won 11 championships since the playoffs began in 1975, including five in a row from 2006 to 2010. The Pioneers have won seven straight this fall after stumbling to a 1-2 start.

The two powers have played only two times in history, with Muskegon winning both times.

“We need to come out and play our game,” said Pimpleton. “We believe in our coaches and that they will put us in the best spots to win. That’s really all that matters. We can’t lose sight that no matter who is out there, that is our one goal.”