Cole Giesige had a big smile on his face when he went into the Ottawa Lake Whiteford huddle during the fourth quarter of Friday night’s win at Erie Mason.

Giesige normally is a running back for the Bobcats, but he is also the backup quarterback for the team. When Whiteford built a big lead Friday to clinch the outright Tri-County Conference championship, Whiteford head coach Jason Mensing inserted Giesige at quarterback.

On the first play, Mensing called Giesige’s number. He then put his arm around the 6-foot-1 senior and called the play.

Giesige kept the ball and sliced his way through the Erie Mason defensive line for a six-yard gain. Goal accomplished. It was his final carry of the game, but it was a big one. It gave him 1,004 yards for the season.

“The line said, ‘All right, we’re going to get this for you’ and they did,” Giesige said. “I knew I had 909 coming into the game, but I didn’t know where I was at that point. When coach told me, I just started to smile.”

Reaching 1,000 yards has been a goal for Giesige since he was summoned to the varsity his sophomore season.

“That was one thing I set out to do,” Giesige said. “When I was a sophomore and I knew I was going to be on the varsity, I put goals on my walls, and one of them was 1,000 yards in a season. I’m glad I was finally able to accomplish that.”

Mensing said that after a big JV season as a freshman, Giesige was destined to be a big part of the Whiteford football team for the next three seasons.

“He’s a great kid,” Mensing said. “We knew when he was a sophomore and we brought him up that we were going to be relying on him to make big plays. He’s done a nice job.”

On Friday, Whiteford finished the regular season with an 8-1 record and No. 2 in playoff points in Division 8. The Bobcats are among favorites to make a deep run in the playoffs. 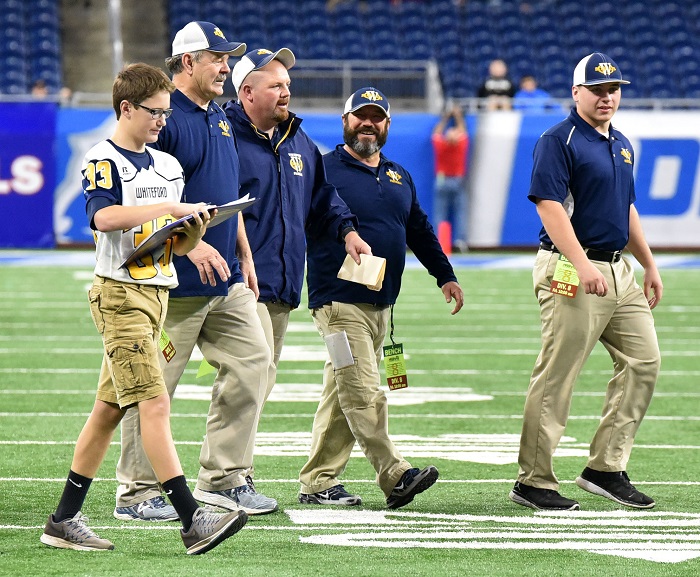 Giesige was in eighth grade when the Bobcats made its best-ever playoff run – winning the 2017 Division 8 championship. Giesige played middle school football for the Bobcats that season, but served a role for the varsity as well – he was on the Whiteford sideline for the Final at Ford Field, charting defensive plays for the coaching staff.

“He’s been a part of the program for a long time,” Mensing said.

The son of Troy and Kim Giesige is also an accomplished baseball and basketball player at Whiteford. He was an all-state pitcher last year for the Bobcats baseball team that reached the Quarterfinals, and he is fielding offers to play the sport after high school. He led the Whiteford basketball team in scoring last winter.

“He is a competitor that has a passion to improve at his craft daily,” Mensing said. “He has high expectations for himself and those around him.”

It’s been an outstanding football season for Giesige. He has done a little bit of everything for the Bobcats.

He now holds the record for longest kickoff return (95 yards) and longest interception return (100 yards) in school history. He’s moving up the charts in season and career touchdowns. He averages 9.3 yards per carry and nearly 23 yards per reception. His kickoff return average is 40 yards per attempt.

Mensing said scoring touchdowns isn’t all that he does.

“He is a solid blocker, a good ball catcher and obviously a back with good vision and ability to cut,” the 10th-year Whiteford coach said.

Whiteford has been on a roll of late. The Bobcats enter the postseason on a five-game winning streak and are averaging 52 points per game. During the win streak, they have scored 58, 54, 76, 46 and 62 points.

Giesige is one of just five seniors on the team, but they all play important roles. Two-way tackle Noah Bauman is a two-time all-stater and makes an impact on both sides of the ball. Jack Andrews was a center as a sophomore but was converted to tight end and he has caught four touchdowns this season. Ty Ruddy is a team leader and two-way starter, and linebacker Levi Hillard is among the team’s top tacklers.

Thanks to that core group, the Bobcats are primed and ready to make noise in the playoffs.

“I’m not really certain how it compares to years past as each team and journey is so unique,” Mensing said. “I do know we have a great group of guys that I think want to keep competing together a little longer.”