ONEKAMA — The Upper Peninsula is soon to be invaded by Portagers.

The village of Onekama, meanwhile, might resemble a ghost town.

A large and loyal following for the Onekama football team is geared up for a trip to the Superior Dome in Marquette, site of Saturday’s 8-Player Division 2 Football Final, where the Portagers (10-2) are taking on Rapid River (9-3) in their quest for the school’s first MHSAA football championship.

“It’s really energized the community,” said Onekama head coach John Neph. “I’m so happy that our local community has responded so well. It means so much to have this special event going on.”

Yard signs and window decorations have sprung up all over town. Residents have stepped forward to find out how they can aid the team during its journey to the championship game, while fans have shown up to games in droves as the team has advanced farther in the postseason, past the likes of Marion (22-6), Brethren (52-0) and Portland St. Patrick (28-14).

“Everyone’s supporting us. The community here is amazing, especially for the football program,” said running back/linebacker Ben Acton. “We had the most people we’ve ever had for our games in the playoffs this year. It’s awesome seeing everybody out there in the stands and after the games.”

The Portagers have given their fans plenty to cheer about. The program had four playoff wins all-time entering this season, and they have nearly doubled that total with this playoff run.

Getting to the championship game wasn’t at the forefront of Onekama’s goals this season, but it hasn’t come as a complete shock, either. The Portagers had five seniors and three top juniors returning to a squad that went 9-2 in 2017.

“We thought we could be pretty good,” said Neph. “Then we had a really good preseason camp, and we got better. We were very pleasantly surprised with the overall development of our players. Our guys have gotten better and better as the season has gone on.”

It’s a squad that has embraced the team aspect of the game. Sure, there are standouts — Acton and  junior running back/linebacker Aaron Powers have been playmakers on both sides of the ball, senior Rylan Clarke has led from his tight end position, and senior Wyatt Lawson and junior Wade Sedlar anchor the offensive and defensive lines, respectively — but the Portagers relish functioning as one cohesive unit.

“This isn’t one person’s team. Or the coaches’ team. It’s our team,” said Neph. “It’s all of us together. That has made a huge difference with the morale, and the long run we’ve had. Sometimes at the end of a season you can get tired of going to practice, and I don’t think we’ve ever experienced that. It’s a group of guys that like coming out here, enjoy working with each other. We have some fun, and we’ve been winning, which helps.” 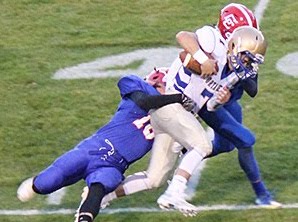 Onekama has proven it can score points, having topped the 50-point plateau four times. The Portagers like to be known as a stout defensive team, though. They’ve backed that up by shutting out four teams this year, not counting two forfeit victories.

“We really take pride in our defense,” said senior defensive back Ben Johnson, one of four defensive players to receive accolades on the all-Midwest Central Michigan Conference West teams. “We’re a defensive team but our offense — when it clicks, it clicks too.”

The Portagers finished third in the West after they had tough losses to league champion Wyoming Tri-unity Christian (28-26) and runner-up Suttons Bay (13-8). Neph felt like the loss to Suttons Bay, which came two weeks before the start of the postseason, ignited Onekama’s push through the playoffs.

“We lost it late in the game on a long pass,” said Neph. “It felt like we were about to win the game, and to have it taken away from us like that, that was tough. I’m extremely proud of our guys. That’s where the upperclassmen stepped forward and said, ‘We lost today, but we’re going to bounce back and keep going.’ I would say that was a significant turning point for us. We got back to work and moved forward from there.”

The Portagers have reeled off four straight wins and whipped the entire school and community into a frenzy.

“It’s great,” Clarke said of the atmosphere at school. “Our math teacher looked at us today and said, ‘I still can’t believe you guys are going to the Finals.’ Our student support is tremendous. For a small community like us, this is great.”

Advancing this deep into the postseason has created a lot of additional planning and extra responsibilities for Neph and his staff, including making arrangements for hotel accommodations, transportation and meals for the team. He wouldn’t want to have it any other way, with the opportunity to win a Finals championship.

“It would just be an unbelievable, historical moment for our school to win the state championship,” he said. “It would be the crowning event of a lot of people putting hours and hours and hours of work into the football program. For the players, it would be the ultimate experience for them. Something that will last the rest of their lives.”

Win or lose, this season and this playoff performance already has created a deep bond among the 18 players on this year’s Onekama squad.

“We’re brothers,” said Clarke. “We’ll probably be brothers for the rest of our lives. We’ll probably all be coaching our kids together when we’re 30 and 40.”