His father, Mike, did so in Vietnam. Grandfather Alex Ostipow – now 90 – was part of the D-Day Invasion of France during World War II, then taken as a prisoner of war during the Battle of the Bulge in Belgium, and earned three purple hearts while deployed from 1942-46.

Tonight, as the Orioles’ football coach leads his team against Eaton Rapids, both will take the field with him – symbolically at first, and then down from the stands with a larger group of veterans and active-duty soldiers who will be honored for their contributions to this country. 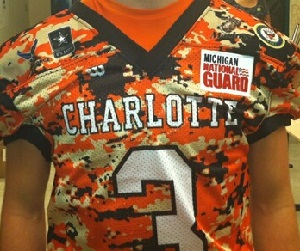 Mike and Alex Ostipow's names are among those that will be worn on both teams’ jerseys as part of their “Victory for Veterans” game to benefit the Veterans of Foreign Wars National Home for Children based in Eaton Rapids.

Funds raised from the purchase of those jerseys and other donations all will benefit the National Home, which was built in 1925 and provides a variety of services to military members and their families, including housing when a family member is deployed. Total, the schools raised roughly $6,300 for the home, which receives all of its funding through donations.

“The kids don’t always understand what those people sacrificed for the freedom we have to even play football on Friday nights,” Ostipow said.  “It’s close to me. (And) for me, selfishly, I’ll be able to honor my grandfather.”

Kickoff is 7 p.m. Both teams will wear camouflage jerseys featuring the names of military personnel that were purchased with donations of $100. Charlotte players were given the opportunity to wear the names of family members. For those who did not have names to wear, jerseys were sponsored by teachers and other members of the community.

Charlotte 2002 graduates Nick Cantin and Matt Lamoreaux will serve as honorary captains – Cantin is in the Air Force and Lamoreaux serves in the Navy. After the game, players from both teams will present their jerseys to the service members or their families who they honored.

This cause was a natural for the Orioles. On the Friday before Memorial Day each spring, Charlotte hosts a school-wide round table of veterans, who speak candidly with students about their war experiences. And this opportunity allowed both communities to donate to an effort close to home – both schools are in Eaton County, and Eaton Rapids is only 11 miles from Charlotte.

Ostipow had heard of the home previously – in fact, his grandmother had visited the facility while his grandfather was deployed. But until he began researching for tonight’s event, he didn’t realize the variety of services it provides.

His student teacher, former Eaton Rapids quarterback Matt Marriott, is the son of one of the home’s facility managers. After a series of meetings with Marriott's dad, representatives from the home and Eaton Rapids’ administration and coaches, the plan was hatched.

The Orioles received a bonus when their local National Guard recruiter heard about the effort, and the Guard paid for $2,500 of the $2,800 it would have cost to print the Orioles’ jerseys. That meant $2,500 more that Charlotte could donate to the home.

Click to learn more about the VFW National Home for Children.