As a coach and athletic director at Orchard Lake St. Mary’s over nearly three decades, George Porritt has been asked plenty of times to recall details from his football program’s storied past.

That comes with coaching a program that annually has a roster full of highly-touted high school players coveted by college recruiters and has seen the best not only shine for prominent college programs but also NFL organizations (see Allen Robinson of Jacksonville).

“When was the last time a player did that?”

“What is the school record in this category?”

“How often has your team done this in a season?”

“When was the last time you lost to this opponent?”

For the past 40 years, turning to Goddard has been a frequent option for anyone around St. Mary’s, and for that matter, other schools around the state.

It is why there will be lots of people in the prep sports community thinking of him when he has surgery on Thursday to break up kidney stones that have been bothering him during recent weeks.

Goddard each year puts together media guides with records and teams at St. Mary’s that go all the way back to the early 1900s. (See "Michigan's Football Past: A Must Read")

“If he doesn’t have it in something, he finds it right away,” Porritt said. “He goes to the library and he tries to dig it up. He calls the other school and has done it for years. He keeps a great history of our school.”

Surely though, there have to be times when people raise their eyebrows at Goddard and wonder how he can possibly get accurate information from a century ago, right?

Not around St. Mary’s, anyway, even if it is hard to fathom for many others that high school sports in Michigan actually did exist before the start of World War I.

“I won’t even challenge him,” Porritt said. “I know he found it somewhere. He’ll tell other schools what their records are historically, and they don’t even know what theirs is. He has fun doing it and will go anywhere and find any way to find out the history of whatever he is looking into.”

Goddard’s importance to the school isn’t limited to being arguably the Encyclopedia Britannica of prep sports in the state of Michigan.

Also a facilities coordinator and valuable fundraiser, Goddard has spearheaded projects to put a track and lights at the football field, and was the architect of one of the most ambitious and out-of-box ideas ever seen at the school – the red artificial playing surface now on the football field. 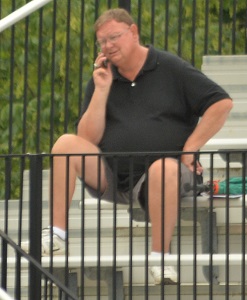 During Labor Day weekend in 2011, Goddard flew to Cheney, Wash., to meet with officials at Eastern Washington University, which at the time had the only red-colored artificial football field in the country.

Goddard picked the brains of the folks at Eastern Washington, came home and started a fundraising effort to try and secure $600,000 to bring a red-colored artificial surface to St. Mary’s.

By the following spring, the funds were raised and construction began on the field that was ready by the start of the 2012 season.

At the time, it was the third red-colored field in the country in addition to Eastern Washington and a high school field at Canyon High School in Texas.

Goddard also helped start the annual Polish Country Fair that takes place on the St. Mary’s campus every Memorial Day weekend, which is one of the most regularly-attended festivals in the Detroit area.

Len Karschnia, an administrator and assistant coach for the both the football and basketball teams at St. Mary’s, said when Goddard gets in touch with alums who have the means to donate back to the school, there usually is no hesitation because of their respect for Goddard.

“They always trust Robin to do that,” Karschnia said. “Everything he does (is) for the kids and the school, and that is why nobody is really reticent to give back to any projects that he runs because if he tells you on Tuesday he wants $500 to put up a banner in the gym, on Thursday the banner is up and done and there is a plaque on the wall saying thanks to whoever gave it to him.”

A staple at the school since he arrived in 1976, there obviously will be a lot of prayers and well-wishes around the state for a speedy recovery from surgery.

“He is a guy that whatever St. Mary’s needs, he’ll do it and he doesn’t need any fanfare for his good deeds,” Karschnia said. “It’s all for the kids, for George and for the school. That is really his value.”