DETROIT – Belleville’s football team found Ford Field after a series of near-misses in recent seasons. The Tigers found it much to their liking, too.

Belleville put its speed, athleticism and depth of talent on full display in a 55-33 runaway victory over Rochester Adams in the MHSAA Division 1 title game Saturday. The fast track and climate-controlled environment were ideal for the Tigers in their first-ever Finals appearance.

Freshman quarterback Bryce Underwood passed for 284 yards and five touchdowns with no interceptions, three of the scores to senior Jeremiah Caldwell as the Tigers (13-1) came within a point of tying a record for most scored in a Finals game.

“You get a bunch of athletes on a fast track and without the elements, you know, it was going to be some opportunities for Bryce …,” said Belleville coach Jermain Crowell, the former Detroit Cass Tech assistant, who is now 72-10 in seven years with the Tigers program.

The 6-foot-2, 180-pound Underwood, who is only 14 years old, finished 12-of-21 passing. He capped Belleville’s scoring with a 30-yard run in the fourth quarter when he delivered a forceful stiff-arm in the backfield to a would-be tackler.

The 6-3, 175-pound Caldwell was on the receiving end of only four passes, but the playmaker converted them into a whopping 204 yards. Underwood connected with the lanky, speedy senior on scoring strikes of 56, 64 and 72 yards, all in the first half, as Belleville entered the locker room with a 21-20 edge.

“I would say I wasn’t that nervous, I just knew that I had to come out and execute our plan and finish the football game,” Underwood said.

Belleville took control in the third quarter, when the Tigers converted two Adams turnovers into touchdowns – one on a blocked punt and the other on a fumble recovery. They led 35-20 entering the fourth quarter, and that margin never dipped below 14 points the rest of the way.

Six different players scored TDs for Belleville, illustrating Crowell’s point in the postgame press conference that it was a team effort. The Tigers had no turnovers.

“It was the team. I mean, to be honest with you, it was the team,” said Crowell, whose squads lost semifinal heartbreakers to eventual 2020 state champ West Bloomfield (35-34 in double-overtime) and Brighton in 2019 (22-19). The Tigers also lost in the 2018 semifinals to eventual state champ Clinton Township Chippewa Valley. 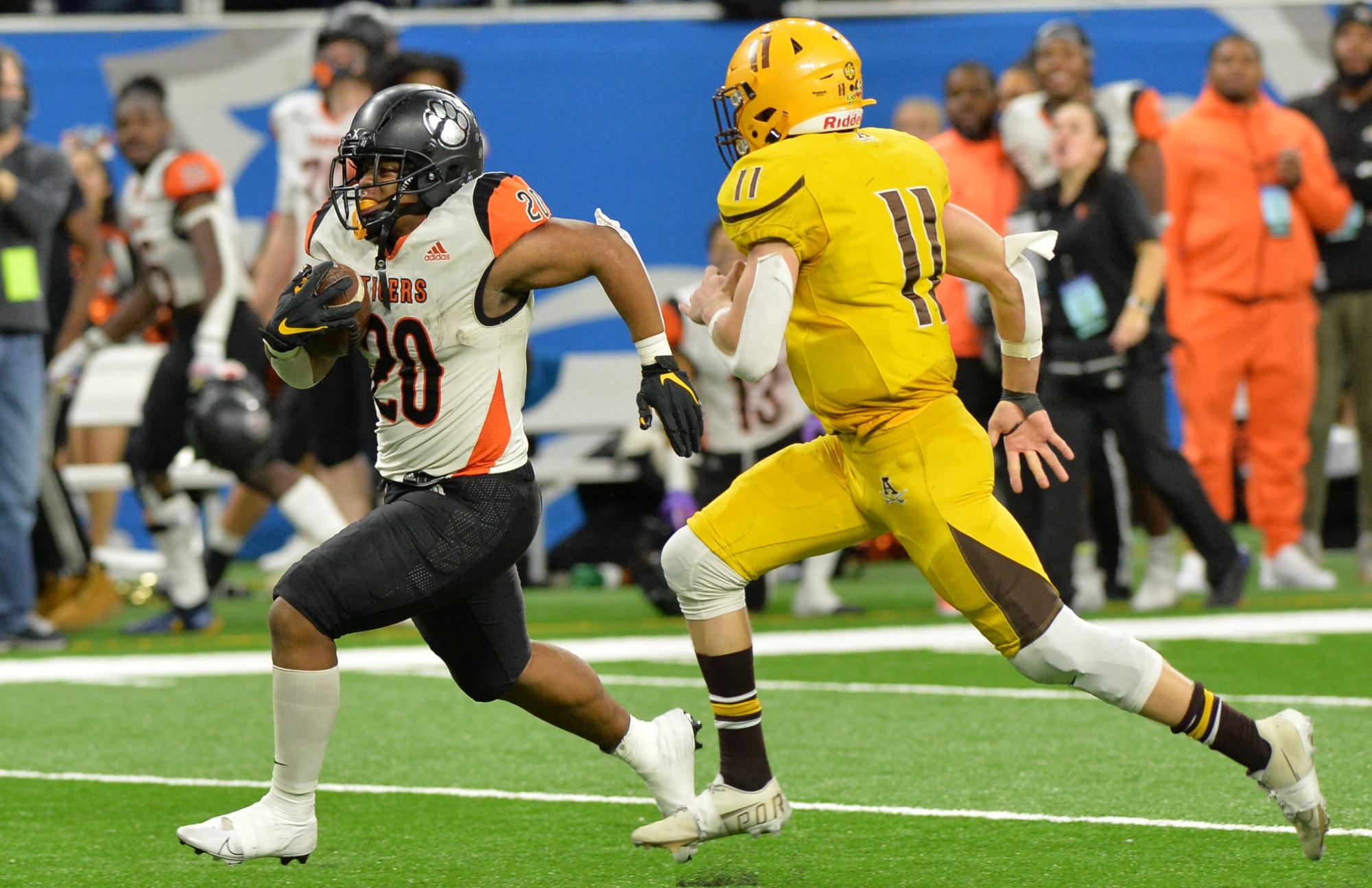 Even though Belleville’s defense surrendered 33 points, the Tigers made enough plays on that side of the ball and they did it with several players contributing.

As much as Crowell stressed “team,” it was hard to ignore the individual talents of Underwood and Caldwell.

Said Adams coach Tony Patritto about Underwood: “His resume was pretty strong before he even got to Belleville. He can really sling it and, you know, his receivers made some big plays and a lot of yards after the catch. A lot of that’s on us.”

Adams (13-1), which went unscathed through the rugged Oakland Activities Association as well as a challenging playoff road, made some plays on Saturday, too.

Like Underwood, Picot was recognized at a young age for his athletic talents. He committed to University of Alabama for baseball as a freshman, but he also poured everything he had into this football season.

Adams was seeking its first state title since 2003, which was Patritto’s first season at the helm, when the Highlanders captured the Division 2 championship.

On Saturday, it was Belleville’s time.

“I mean, it means a lot, especially to the community of Belleville,” said Caldwell, whose receiving TDs and receiving yards ties him for second in both categories in Finals history.

“It’s a new Belleville this year, so everything that happened in the past years was not happening this year. We all came together and made a change as a whole.”