Books are written about this kind of thing. Actually, one was penned 13 years ago about a Benton Harbor football team from more than 100 years ago.

“The Way We Played The Game: A True Story of One Team and the Dawning of American Football” was author John Armstrong’s ode to a Clayton Teetzel-coached Tigers squad at the turn of the century that galvanized Benton Harbor.

The storyline then was how Teetzel helped get the hapless Tigers back on track in 1903 while also evolving a more violent and dangerous version of the sport back then into one comprised of physicality and cerebration.

Benton Harbor is a different place today. Despite all the wonderful things the city has to offer, it has become known for crime and poverty. And in terms of football, there haven’t been many memorable seasons. Until this year, the Tigers’ last winning campaign was a 6-3 effort in 1989. Benton Harbor managed to win just 49 games over the following 25 years.

A new chapter is being written this fall, however, as the Tigers qualified for the postseason for the first time in school history with a 5-4 regular-season record. They stunned a quality Dowagiac team in a Division 4 Pre-District game, 28-7, and take on a 10-0 Zeeland West squad Friday in the District Final.

The well-documented resurgence headed up by 74-year-old coach Elliot Uzelac, a veteran of the high school, college and professional ranks, who thought rebuilding a woeful program while busting through a cultural wall would be a better use of time than the boredom and restlessness of retirement, has been the buzz of the Michigan prep sports world.

Being part of this season at Benton Harbor (he takes no credit), Uzelac said, is the highlight of his 50-year coaching career.

“When you’re younger, you look at things differently,” said Uzelac, who coached at nearby St. Joseph, where he helped the Bears compile a 6-5 record in 2006 after a winless season in 2005, along with head coaching positions at Western Michigan University (1975-81) and Navy (1987-89) and myriad assistant roles in college and the NFL. “Winning is so important. You want to have a proper salary because you want to feed your family. What’s the next stop? If I’m an assistant coach, is there a head coaching position available?

“None of these things exist now. This is strictly about helping people. Honestly, I’ve had the greatest time of my life doing this with these young men. Yes, it’s been hard. Yes, it’s been … (chuckle) really time consuming and we really had to work hard. But I’ve never been more satisfied and never felt better about accomplishing something with young men than I have this time.” 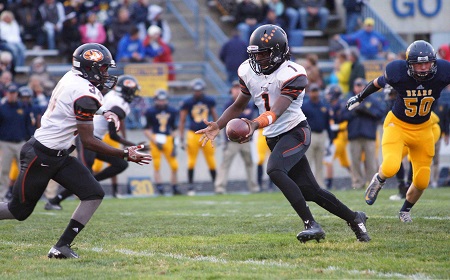 Uzelac’s hiring might not have happened if not for a persistent Fred Smith, who applied for the athletic director job on five separate occasions, finally landing the position this summer. Smith, nearing retirement, also wanted a challenge, and Benton Harbor had some kind of magnetic force.

When Smith was a student at Western Michigan University, his first student-teaching assignment in 1979 was at Benton Harbor with then-head basketball coach Earl McKee. Smith had a desire to coach basketball and requested an internship at Benton Harbor, because, he said at the time, “they play the best basketball.”

Smith was able to stay there for two more years as a full-time substitute but moved on to many other jobs in education, including stints as AD at Comstock and most recently Buchanan. He made a big impact at Buchanan and left the school on very solid ground. Buchanan is undefeated in football this year and is gearing up for a Division 5 district championship showdown with Berrien Springs. In volleyball, the Bucks picked up their 46th win of the season Wednesday in the Class B District Semifinals — a single-season victories record for the program.

Uzelac, curious as to whether or not Benton Harbor would join the Berrien-Cass-St. Joseph Conference, called Smith on July 4th to chat about the new league.

“In conversation, he told me the AD job was open,” Smith said. “A long story short, he talked me into applying. I had an interview July 14th, was offered the job July 16th, and on July 20th I signed my letter of agreement. I hired Elliot July 21st.

“This was the fifth time I applied for the job back here. A lot of people wonder why I wanted to come back. We all want to make a difference in kids’ lives. I think there’s a chance to do big things here.”

It’s a perspective shared by Uzelac.

The morning after the Tigers beat Dowagiac, he addressed his players.

“You’ve given me far more than I’ve given you,” he told them. “That’s the truth. I’ve never felt this way before.

“I don’t think anybody realizes how bad they’ve had it. It’s a wonderful, wonderful feeling.”

Six days earlier, on Selection Sunday, a Benton Harbor student died in a drive-by shooting. A winning football season can only change so much. 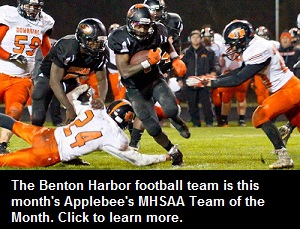 But similar to Teetzel over a century ago, Uzelac is making the young men in his charge to think their way through school, football and life — even when it pertains to new technology and means of communicating he doesn’t understand.

“Never,” he said when asked how often he uses social media. “I don’t even really know what (Twitter) is. Things are said on Twitter than can really create problems, especially in a community like this. You’re talking about a very tough community and the word ‘retaliate’ is used often around here, which we’re trying to change that attitude. You have to be very careful what you do and say in this community.”

A consummate professional in the press box, longtime Benton Harbor football announcer Greg Mauchmar‘s animated play-by-play this year wasn’t just a veneer. Gradually, beginning with the team’s first win since 2012 — a 14-9 victory at home over Battle Creek Central in Week 2 — his voice was being received by human eardrums in the stands rather than bouncing around empty bleachers.

Mauchmar, just one of many people who have done their part to embrace the football team even through extremely tough seasons, remembers countless games where there were as few as a 100 supporters in attendance.

“Everyone has rallied around this team and there’s a level of excitement that inspires us,” he said. “I can get excited because the people in the stands are excited and I don’t have to work hard to do that. When the kids looked up there and didn’t see too many people (in past years), you know how motivating that is. Sometimes you felt like you were preaching to the choir. We wanted more membership in the choir.”

This fall’s feel-good football story has grown legs. National news outlets such as ESPN and Sports Illustrated picked up on what was published by scribes around Michigan, spreading the story to the farthest corners of the country.

Messages of support have come in from all over Michigan and from as far away as California, Louisiana, Florida, Georgia, South Carolina, Ohio and Illinois, Uzelac said.

The Benton Harbor bandwagon, it appears, is nearly full.