With just 23 seconds to play in the Division 1 Final, Clarkston scored to pull within one point of the Big Reds. Wolves coach Kurt Richardson, himself known statewide for defensive genius over 32 seasons leading the program, rolled the dice and went for a go-ahead 2-point conversion.

After a timeout, fullback Jake Billette took a direct snap and went left, then handed off to receiver Josh Luther running right, who was looking to either run or pass for the conversion.

But Chippewa Valley senior defensive lineman Michael Garwood read the play perfectly, stayed home on the reverse and then bull-rushed Luther for a four-yard loss, preserving the Big Reds’ 31-30 victory and first MHSAA football championship since winning Division 2 in 2001.

“A lot of people talk about our offense, but that was a huge defensive play right there, obviously,” said 10th-year Chippewa Valley coach Scott Merchant, whose team finished 14-0 and was known for its offense. “Michael Garwood, our defensive end, stayed home on the backside and really blew up that play.”

Garwood’s tackle for loss ended a valiant comeback for Clarkston, which was looking for its second consecutive Division 1 title and fourth in six years.

The Big Reds stunned the Wolves with two TDs in the first 6 minutes to take a quick 14-0 lead, and still led by that same margin, 24-10, at halftime.

The second half was a different story as Clarkston scored three touchdowns to just one for Chippewa Valley, but the failed two-point conversion attempt proved to be the difference.

“We’ve been aggressive forever here, and that’s the way we play football,” said Richardson, a 1971 Clarkston graduate who has turned his alma mater into a state powerhouse, explaining his end-of-game gamble. “We called a timeout, and we were all in on it. They defended it well, so what can I say? It was just a great high school football game.”

The Big Reds, champions of the Macomb Area Conference Red, were able to move the ball consistently against the vaunted Clarkston defense because of crafty senior quarterback Tommy Schuster and a bevy of dangerous weapons including Martice Bunting, Andrew Chenault and David Ellis.

Schuster, a 6-0, 195-pound senior, was a perfect 13-for-13 through the air for 205 yards and two touchdowns. He set the MHSAA Finals record for passing accuracy for players who have attempted at least 12 passes in one championship game, breaking the record of .846 set in 2011.

Schuster, who had a 36-yard scoring strike to senior Bunting in the first quarter and then a 25-yard scoring pass to Bunting late in the third which proved to be the game-winner, said all of the pregame talk about Clarkston’s defense motivated him and his offensive teammates. 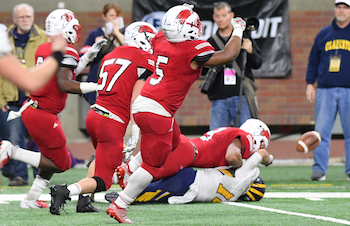 “We definitely took it as a challenge,” said Schuster, a three-year starter who threw for 1,858 yards with 26 touchdown passes and only one interception this season. “Our gameplan was to come out strong and punch them in the mouth, get their attention, and then keep it up.”

Clarkston’s final drive began at its own 22-yard line with 2:28 remaining and the Wolves trailing, 31-24.

Senior quarterback Jake Jensen, outstanding himself with a game-high 121 rushing yards and 10-of-15 passing for 110 yards through the air, engineered a 10-play, 78-yard drive which culminated with a seven-yard touchdown pass to Matt Miller with 23 seconds left on the clock.

That set the stage for Richardson’s gamble on the conversion and the title-saving tackle by Garwood.

Clarkston actually finished with the edge in total yards, 347-320, including a 213-115 edge on the ground. The difference turned out to be Schuster’s perfect day through the air, as he averaged 16 yards per pass, and also one big special teams play.

After the Wolves closed to within 17-10 on a three-yard scoring run from senior Jacob Honstetter just 41 seconds before halftime, Chippewa Valley speedster David Ellis answered right back.

Ellis, who has committed to Indiana University, took the ensuing kickoff at his own 6-yard line and turned on the jets, sprinting 94 yards along the Clarkston sideline to up the lead to 24-10 at the break.

“I just wanted to make something happen,” explained Ellis, who has 4.4-second speed in the 40-yard dash. “I saw a hole to the left and just ran as fast as I could.

“Clarkston was one of the best defenses that we faced, but we just have too many players. You can stop one, but then there’s five or six others to worry about.”

Ellis added three receptions for 58 yards, and Bunting had three catches for 66 yards. Chenault was the leading rusher with 12 carries for 67 yards. Chippewa Valley’s defense was led by Ja’Von Kimpson with an interception, Myles Harris with eight tackles, Jonathan Zak with six and Garwood with five.

Billette had 11 carries for 70 yards and a touchdown for Clarkston. Luther had four receptions and Conor Donahue and Miller had three catches apiece. Max Nicklin, Aaron Berti, Brendan Barker, Zach Reid and Luther all made six tackles.

The game was the polar opposite of last year’s Division 1 Final, where Clarkston beat West Bloomfield by the baseball-like score of 3-2. That five-point affair was the second-lowest scoring game in Finals history, and Clarkston tied the record for most punts in the Finals with eight.

Saturday also was vastly different from Clarkston’s previous four playoff games, where the Wolves allowed a total of 16 points.

Chippewa Valley scored its 17th point early in the second quarter on a 36-yard field goal by Niko Kepi.

By then, both coaches knew it was going to be a whole different type of ballgame.

“This is a huge day for all of us, our football program and our community,” said Merchant. “I am thankful to all of these players for taking me on this ride. This is a special, very humble group of kids that always give credit to other people.”