After 20 years and professional careers in two sports, a quick glance isn't about vanity for Henson. The former Brighton football and baseball star said he's simply curious whether his myriad records are withstanding the test of time.

"Sometimes somebody will send me (a link), and I'll look to see if anybody is getting close," Henson said. "I've got to see who is coming up."

Henson, 37, graduated from Brighton in 1998 having set 11 major hitting records, eight of which he still holds 20 years later. He's also noted among the state football record setters after throwing for 5,662 yards and 52 touchdowns during his Bulldogs career. Twice he threw for more than 2,000 yards in a season during an era right before spread offenses made doing so a much more regular occurrence. In addition, he was a standout basketball player as well at Brighton and his class’ valedictorian.

In baseball, Henson is still the all-time career leader in hits (257), doubles (68), home runs (70), grand slams (10) and RBI (290). The 70 homers is 23 more than those hit by any other Michigan high school player, including eventual major leaguers such as Nate McLouth (Whitehall), Ryan LaMarre (Jackson Lumen Christi) and Zach Putnam (Ann Arbor Pioneer). Henson drove in at least 78 runs every season sophomore through senior years. He's the state's all-time leader in RBI by 87. He also continues to hold national high school records for career RBI and grand slams.

Henson's senior baseball season is unquestionably the best ever amassed by a Michigan prep player. He set single-season records with 22 homers and 83 RBI, batted .605 and went 14-2 as a pitcher, including appearing in an MHSAA tournament game in which he struck out 20 of 21 batters, allowing batters to make contact with a pitch only twice. 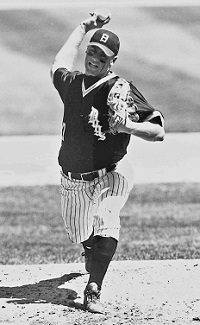 Now living in Tampa, Fla., Henson he still views the records the same way he did before he departed to play quarterback at University of Michigan and then eventually sign $3.5 and $17 million contracts with the Dallas Cowboys and New York Yankees, respectively. Henson, who once fielded ground balls beside Derek Jeter and battled Tom Brady for a starting job, played on four Brighton baseball teams that averaged about 30 wins per year.

"A lot of factors created those opportunities for me. You don't set records like that without playing on a good team with good teammates," he said.

"We were a good hitting team from one through nine in the order. Our goal was to try and win state every year. I wouldn't have hit the homers or driven in the runs every year without my teammates. I have a lot of vivid memories of high school that are near and dear to my heart."

Former Brighton coach Mark Carrow said it's no surprise to him that Henson still owns the record book two decades after graduating. Carrow said Henson was the perfect blend of work ethic and natural talent.

"I coached for 34 years, and he was without question the best player I ever saw," Carrow said. "From the time he came to us as a freshman, it took one look at him throwing or one look hitting to know he was special.

"If there was a checklist for what you wanted in a baseball or football player, he checked the top of the box every time. He could throw 97, 98 (mph) and he could hit. He could dominate a game."

Carrow said the records are even more remarkable when you consider Henson every season would draw more than 40 walks, many intentional.

"Scouts used to come to the games, and I mean teams' top scouts," Carrow said. "And they'd say Drew was as good as they had ever seen."

Henson’s parents both were Division I college athletes, and his father Dan coached football at four Division I programs. Still, Drew’s dual sport professional career nearly took a different path as a youngster. While Henson started playing T-ball as a 5-year-old, his first love during his preteen years was basketball. Henson didn't play his first competitive football game until the eighth grade.

Considering he had interests in virtually every sport and at least in part because his father was a football coach, Henson thought of himself as a "gym rat" growing up. He would tag along to his father's practices, devour box scores in the paper and prop himself in front of the television on fall afternoons.

Much of high school athletics today is focused on specialization, but Henson said he never considered narrowing his sports to one. In fact, he encourages his young daughter to play as many sports as she can fit in.

"It never got dull for me," he said. "For a lot of kids today, it's too much for too long. You don't get a mental break. You can start to lose you." 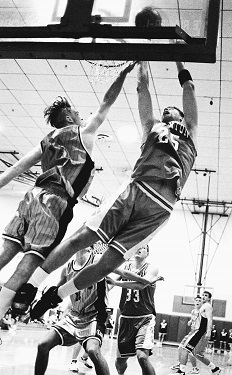 While Henson's high school career was one for the record books, and he helped the Wolverines to a 9-3 record and Cotton Bowl win in 2000, his professional career never took off. He was a third-round draft pick by the Yankees (97th overall) in 1998 and sixth-round pick of the NFL's Houston Texans in 2003.

He stalled at Triple-A in the Yankees system, but did make the major leagues in 2003, singling off the Orioles' Eric DeBose for his only big league hit. He wound up retiring from baseball following the season after hitting .248 with 67 homers and 274 RBI in 501 minor league games. He was 23 years old.

In the NFL, Henson wound up making one start for the Cowboys in 2004 and in 2008 joined the Lions for a season. Henson threw one touchdown pass as a Cowboy, to Jeff Robinson in 2004.

Henson, who in July of 2015 still rated a profile in Sports Illustrated a decade after throwing his final pass in the NFL, has been asked many times about his lack of success in professional sports. Past speculation states he was rushed through the Yankees' chain, while participation in professional baseball may have stunted his football development.

Two decades after leaving Brighton, Henson said he still answers the question of which sport was actually his favorite the same way: with diplomacy.

"I've always said nothing was more fun than to play baseball, but there is also nothing like being in the huddle on the football field," he said. "It's hard to say which I liked more. You can play baseball every day, but you can only play football once a week."

The one regret Henson may harbor has to do with patience. If he had to do it all over again, Henson said he'd force himself to slow down and enjoy the process. Henson said he often felt he had to play catch-up in both sports.

"I would tell my younger self to have more patience. There were so many opportunities after my junior year (of college) that would have still been there as a senior," he said. "Because of that I wish I would've had more patience and let the process play out."

Henson said his message to youngsters who face the same challenge is simple.

"Society is so go, go, go," he said. "You just have to learn to hit the pause button. If you're always on to the next thing, you're not embracing the moment. I wish I had done more of that.

"If you like to work and put in the time, you can be successful. All that goes into it. If you have the heart and desire and pay attention to detail, you will be successful."

PHOTOS: (Top) Drew Henson starred during the fall at Brighton’s quarterback. (Middle) Henson struck out 20 of 21 batters he faced in a 1997 game against Walled Lake Western. (Below) Henson also was a basketball standout, averaging 22 points per game according to a Sports Illustrated profile published in 1998. (Football and basketball photos courtesy of Brighton High School).