The Patriots have transitioned from 11-player to 8-player football this season in a big way. Playing their first season under Michigan’s 8-player format, the Patriots are 5-0 through five weeks and already clinched the program’s first league championship since 2000.

“I think it’s been great for our program,” said senior quarterback Nicolas Johnson. “We’re having a lot of success. I think the team is really focused. All I care about is us winning.”

After struggling mainly due to low numbers at the varsity, junior varsity and middle school levels the last several years, BD is doing a lot of winning this year. In fact, the Patriots have been dominant. After accepting a forfeit in Week 1, BD has won by scores of 64-8, 38-12, 68-0 and 54-16. They are 3-0 in the new Tri-River 8 Conference with one league game remaining. Every other team has at least one loss, meaning they can do no worse than share the league title.

“The league championship is nice,” he said. “I think some of our guys kind of forgot what it felt like to be a contender.”

The last time BD won a league championship was during a run of three straight Tri-County Conference titles from 1998 to 2000.

Technically, this is the first conference championship in school history.

Britton and Deerfield are two small communities in Lenawee County. The Deerfield school building opened in 1874 and the Britton building in 1893. They were two distinct school districts for more than 100 years. 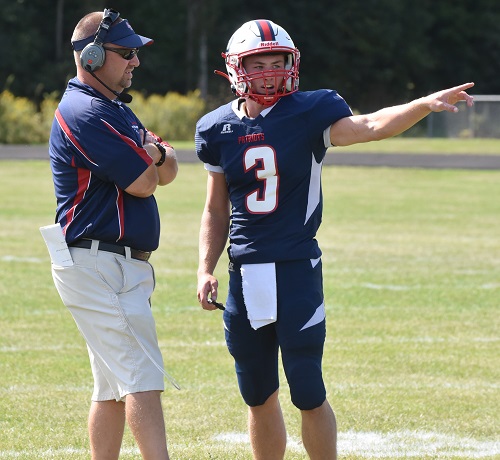 During the early 1990s, both schools were struggling with low participation in some varsity sports. In 1993-94, the varsity football and track teams formed co-ops and played as Britton-Deerfield. The Britton-Deerfield football program had some outstanding teams, winning multiple conference titles and sending several players into the college ranks. Two of those are head coaches at Division III Michigan colleges today – Dustin Breuer at Albion and Dan Musielewicz at Olivet College – and several others are head coaches at the high school level.

As more and more sports became co-op programs, the schools continued to operate separately until 2011 when the school boards of both communities voted to adopt a shared service plan. On July 1, 2011, just before Independence Day, voters in the two communities approved consolidation of the two schools into one – Britton Deerfield.

Erik Johnson took over the BD football program in 2017. The Patriots went 1-8 in back-to-back years but made the playoffs in 2019. Last year BD went 1-6. Soon after the season ended, school officials announced the team would be moving to 8-player football this year.

“I spent most of the winter watching YouTube videos and talking to 8-man coaches,” Johnson said. “I love information. I was curious about how some schools ran practices and what offenses they run and what the difference was on the 40-yard-wide field. I talked to coaches all over the place, asking questions.”

BD had played a couple of seasons of 8-player junior varsity football because of low numbers, but the varsity level was all new this year.

“We hit the ground running,” Johnson said. “It was great to have the summer workouts where we could build some camaraderie. We had some new guys that we needed to get up to speed. We had some six-on-sixes and seven-on-sevens too. That helped.”

BD committed to two years of 8-player football, and then will evaluate the program and where it is headed. Johnson said it all depends on numbers.

Playing nine new opponents added an extra dimension to preparation for the season.

“I watched a lot of film, but it was from previous years,” Johnson said. “I just tried to learn as much about the opponents as I could.” 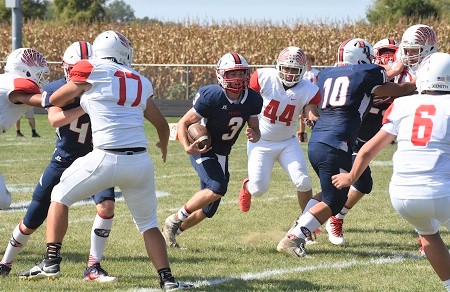 The season got off to a slow start when BD’s first opponent – an Ohio school – canceled due to lack of available players. Since then, the Patriots have been unstoppable, rolling to four on-the-field wins. They have had several big moments, but last week’s performance by Nicolas Johnson was eye-popping.

The quarterback ran for 251 yards and four touchdowns and passed for 101 yards and another score. Over four games, he has 623 yards rushing and 375 passing. He’s accounted for 17 touchdowns.

Nicolas, known as “Nico,” is the son of Erik – who also serves as athletic director - and BD superintendent Stacy Johnson. Nico’s brother Carson is a sophomore on the Patriots JV team, and his grandfather John is an assistant coach. John and Erik have coached together for nearly 20 years.

Nico is a three-sport star at BD and a member of the MHSAA’s Student Advisory Council.

“It’s always fun to watch him,” Erik Johnson said. “I thought he would have a really good year. Once he gets in the open, he can make guys miss.”

Nico said the biggest difference between 11 and 8-player football is having room on the field to run.

“Once you beat the linebacker, there is usually no one else behind them,” he said. “I feel I have the ability to see the cutback lanes better. It’s a lot different.”

“My passion is definitely football,” he said. “That one thing I have talked to (college) coaches about is whether or not playing 8-player affects my chances of playing in college, and they say no.”

Coach Johnson said when it comes down to it, football is football – no matter how many players are on the field.

“It’s still blocking and tackling,” he said. “It comes down to execution on offense and defense and being prepared in all three phases of the game.”