Sandyn Cuthrell and his Cass City teammates have a simple way to make sure they are properly prepared for each game – treat every week like it’s Laker week.

As they prepare for their District Final, the Red Hawks won’t have to pretend, as for the second time this season, it’s actually Laker week.

The Red Hawks will host archrival Elkton-Pigeon-Bay Port Laker at 7 p.m. Friday for the Division 7 Region 4, District 1 championship. The winner will advance to the Regional Final against either Madison Heights Madison or Detroit Loyola.

The win-or-go-home nature of the postseason adds more to this rivalry game, but it’s also a chance at some program firsts for the Red Hawks. A win would give them their first ever District championship and first ever 10-win season.

“This one, it’s probably the biggest game in Cass City history,” said Cuthrell, a four-year starter at quarterback for the Red Hawks.  “We’re not going to let it be ruined.”

Plenty is on the line, but what the Red Hawks have accomplished to this point already puts them among the best teams in school history.

Cass City won nine straight games after a season-opening 16-14 loss against Montrose – a team that is still alive in the Division 6 playoffs – and won the Greater Thumb Conference West for the second straight season.

It has also allowed 50 points. Total. All season.

“We’re not like huge; we’re all just super fast,” said Cuthrell, who also plays defensive back. “All these years building up to this year, we’ve been really heavy on the weight room every year. We’re all not huge guys, but we’re all really quick and fast. We can swarm to the ball, and there’s not a lot of big plays that can happen when the defensive backs are quicker than the receivers.”

Outside of the Montrose game, the Red Hawks haven’t allowed more than eight points in a game this season and had four shutouts. During six conference games, they allowed a total of 22 points. It’s the program’s best defensive performance since the 1950s. 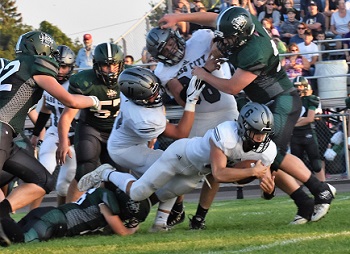 “Coach does a really good job preparing us throughout the week,” junior running back and linebacker Alex Perry said. “We’ve been able to communicate with each other really well. The line gets a good push, so the linebackers can come in and clean it up. And the defensive backs shut down the pass.”

The offense has done its fair share, as well, averaging 40.1 points per game despite scoring just 14 in Week 1. So, while the defense’s numbers are eye-popping, most of the season has seen the Red Hawks be dominant in all phases.

“When you coach this long, hopefully you come across a team that gels really well, and that’s what happened this year,” Cass City coach Scott Cuthrell said. “We have a good group of kids, and they all get along really well on and off the field, and they all have a common goal. This is a group of kids that I’ve enjoyed going to coach every night.”

Players vouch for the camaraderie on and off the field and cited that as a main reason this year’s team has been special and capable of doing what no team at Cass City has ever done.

“We’re more than a team. We hang out all the time,” Perry said. “This year, we just flow and really mesh together.”

Perhaps at no time this season did the Red Hawks mesh together as well as they did the first time they lined up against Laker. A 51-0 win in Week 4 marked the second-straight year Cass City had defeated its rival, but prior to the 2018 win, Laker had won nine straight in the series.

“Last season’s win meant a lot to us,” senior halfback and cornerback Hadyn Horne said. “We’re 10 minutes apart, and it’s just a battle for our area. It’s always been a really big game around here, probably the biggest game in the Greater Thumb Conference. We know in the playoffs it’s pretty much like coming in with a 0-0 record. They’re going to be a lot better than what they were when we played them the first time. Obviously we beat them bad last time, but it’s all about who wants it more.”

The two teams have met twice in a District Final (2014 and 2017). Some of the current players were on the field for the 2017 loss, including Sandyn Cuthrell, who said it was “like getting stabbed in the heart.”

Not wanting to have that feeling again is quite the motivation, but so is making program history.

“That would mean a lot,” Horne said. “I think down the road, I’ll look back at that and know, ‘That was our team that did that.’”

PHOTOS: (Top) Cass City defenders including Alex Perry (44) pursue the Laker quarterback during this season’s first game against their rival. (Middle) Sandyn Cuthrell (6) breaks through the line for the Red Hawks. (Photos courtesy of the Cass City athletic department.)