DETROIT — Thomas Wilcher is a former Detroit Public School League football star who has become one of the most successful coaches in the state.

Wilcher raved about his sophomore signal caller’s mental grasp of the game after the Technicians became the first PSL team to win back-to-back MHSAA football championships with a 36-21 victory over Detroit Catholic Central on Saturday at Ford Field.

Campbell has orchestrated the offense during both championship runs, each of which ended with a dominant performance against perennial power Catholic Central. Cass Tech routed the Shamrocks 49-13 in last year’s title game, as Campbell threw for five touchdowns.

Campbell’s stats weren't as gaudy this time around (4 for 12, 154 yards, one touchdown), but it’s not his physical gifts that drew high praise from Wilcher after the game.

“I told him on the telephone one night, ‘I don’t care about your arm right now. I just love the way you think on the football field,’” Wilcher said. “That’s what makes him so important to me right now. We’re teaching.”

As a freshman, Campbell was given limited ability to change plays at the line of scrimmage. As a 10th-grader who has already started 28 varsity games, he has earned more trust from his coaching staff than many seniors.

“They gave me more of a green light this year,” Campbell said. “Last year, they pretty much told me I could change the play from left to right; that was the most green light I had. This year, I’m changing passes to runs, runs to passes. It’s not getting difficult, but it’s more responsibility on me. I’m up for the challenge.”

On the Technicians’ first play from scrimmage, he audibled senior receiver Jourdan Lewis from a stop route to a go route. Lewis made a leaping catch between two defenders along the left sideline and took off for an 89-yard touchdown to open the scoring with 9:31 left in the first quarter.

“It was supposed to be a stop,” Campbell said. “The corner was playing so far up, I knew Jourdan Lewis was going to get around him. I just told him to go ahead and do what you do.” 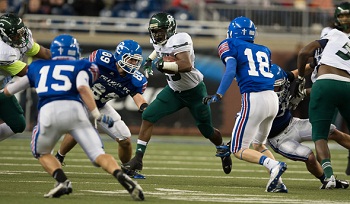 In the fourth quarter, with Cass Tech trying to put the game away, Campbell changed a pass to a draw play to running back Mike Weber on fourth-and-10 from Catholic Central’s 30-yard line. Weber exploded 26 yards to the 4-yard line, setting up a 3-yard touchdown run by Campbell that expanded the lead to 29-7 with 7:59 remaining.

“I saw they had only one linebacker in the back,” Campbell said. “Coach Wilcher really believes in me. He knows I will get the job done. He really trusts me.”

Catholic Central came in looking to avenge last year’s 36-point loss in the Final, but the Shamrocks fell behind 12-0 in the first five minutes on the 89-yard catch by Lewis and a 58-yard fumble return by 260-pound defensive tackle Kenton Gibbs.

A 57-yard run by Weber on third-and-17 set up a 30-yard touchdown run by Deon Drake Jr. on the following play, giving Cass Tech a 22-7 lead on the first series of the third quarter.

“We knew going in from last year’s experience that we can’t make mistakes, because they capitalize well on mistakes, but we did,” Catholic Central coach Tom Mach said. “They made a great throw and catch on the first touchdown. Then we made a couple of mistakes that they capitalized on. We found ourselves in a hole and had to try to get out of that hole. We were doing a good job of that, I thought. Then they exerted themselves and put another touchdown in.”

Catholic Central twice made it a two-possession game in the final 5:57 on touchdown passes by Moores, but the Technicians had an 84-yard interception return for a touchdown by Delano Hill in between them.

“It was no different than last year,” Catholic Central senior running back Anthony Darkangelo said. “We knew last year they were a fast team and we had to keep contain on the edges outside. They executed their game plan and we didn't execute the plan we had for the game.”