Four of the starting five offensive linemen from that MHSAA Division 3 runner-up team, totaling 1,245 pounds in weight – and including 6-foot-5, 360-pound right tackle Anthony Bradford, who is now playing at Louisiana State University – are gone.

“All summer long, we were hearing that we weren’t going to be anything with all of the big boys gone,” said Mills-Ellis, who is certainly a big boy himself at 6-0 and 305 pounds. “We’re not as big, but we’re more athletic.”

Mills-Ellis and the young Big Reds’ linemen certainly made a statement Friday, posting a 285-94 edge in rushing yards against the Pilots, who feature 6-7, 320-pound senior two-way lineman Grant Toutant, an Ohio State commit.

Muskegon (1-0) has no time to sit back and enjoy its big season-opening win, as the Big Reds face another long road trip and another monumental challenge this Friday night at Detroit Martin Luther King (0-1) – a rematch of last year’s Division 3 championship game, which King won, 41-25.

The Big Reds will be out for revenge, led by senior quarterback and returning MLive Michigan Player of the Year Cameron Martinez (6-0, 190), who also has verbally committed to Ohio State. Martinez carried the ball 21 times for 184 yards and three touchdowns against De La Salle, while completing 6-of-11 passes for 57 yards.

Martinez is the latest of an incredible stretch of quarterbacks at Muskegon – most recently bolstered by Kalil Pimpleton, now a starting slot receiver at Central Michigan, and then La’Darius Jefferson, now a major contributor at running back at Michigan State.

“We’ve been blessed with great quarterbacks here lately, but it all starts with D’Andre getting the ball to them,” said 10th-year Muskegon coach Shane Fairfield, who has guided the Big Reds to MHSAA Finals six times in the past seven years and led them to the Division 3 title in 2017.

Mills-Ellis said it’s an honor to block for such talented runners.

“The thing is, you don’t have to get pancakes with backs like that,” said Mills-Ellis, a college prospect who currently has offers from Judson (Ill.) and Northwood and wants to major in biology. “All those guys need is a little bit of room and they’re gonna go.” 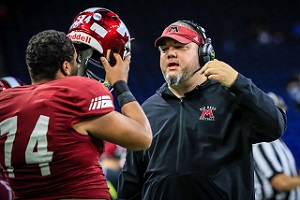 The center always plays a critical role on the offensive line, getting to the ball first, surveying the defense and making sure that everyone up front knows their assignments. Mills-Ellis is used to that job, but he has become much more vocal in it with two sophomores and one junior starting alongside him.

The only other senior up front for the Big Reds is left tackle Billie Roberts (6-3, 255), a converted tight end who Muskegon offensive line coach Matt Bolles says has Division I skills. Starting next to Roberts is junior guard Tayvid Elmore (5-11, 280), while the right side has a pair of sophomores in guard Jamarrius Dickerson (5-10, 295) and tackle Duane Anderson (6-1, 285).

“It’s different for him this year because now he’s our rock, our leader up there,” explained Fairfield. “He’s always kinda been the comedian, but he’s had to scale that back a little, so that when it’s time to get serious the other guys will listen to him.”

The senior is known for his steady snaps, as the Big Reds line up almost exclusively in the pistol formation, with Mills-Ellis initiating every play with a quick snap back to Martinez. While his center is pretty much automatic these days, Muskegon offensive coordinator Brent White said that wasn’t always true.

“We converted him from tackle, and he was a little rocky with his snaps at first,” said White, who gave credit for his improvement to snapping to Jefferson, who is nicknamed ‘Sippy’ because he’s from Mississippi. “Sippy didn’t like bad snaps and he had a way of letting him know that, so he got better in a hurry.”

Mills-Ellis, who is one of the strongest players in West Michigan with a squat of 675 pounds, is also starting for the first time this season at defensive tackle.

Fairfield said during the preseason that he believes his team will be much improved on defense, and it certainly appeared that way in the opener as tackles Mills-Ellis and Roberts completely stuffed any interior running plays.

Muskegon limited De La Salle to just one touchdown, but a bigger defensive challenge awaits this week against a Detroit King team packed with Division I prospects – notably battering-ram running back Peny Boone (committed to Maryland), receiver Rashawn Williams (Indiana) and freshman quarterback Dante Moore, who already has an offer from Michigan.

King shredded Muskegon through the air and on the ground in November’s championship game at Ford Field, but Mills-Ellis said the Big Reds are determined to not let that happen again.

“We couldn’t overlook De La Salle, because they have a great program, but deep down inside, the game we all want and that we’ve been talking about all summer is King,” said Mills-Ellis. “You have to understand, us seniors here aren’t used to losing. This is our chance to make up for that loss.”