SCHOOLCRAFT — Skip Fox figures he and his buddies have the best seats in the house when it comes to Schoolcraft football.

And the four have had them for a combined 167 years.

Fox, Jeff Bell, David Krum and Dick Goldschmeding make up the chain gang for the Eagles’ home games, and boast tenures individually and working together that surely rank among the longest in Michigan for providing that gameday duty.

They work well together, an asset when it comes to games like Schoolcraft’s 49-48 double overtime win against Saugatuck last Friday.

Each has a specific job with Bell and Goldschmeding working the chains, Krum the clip and Fox the down box.

Do they lose focus during those long games?

“Never,” Bell said, as the others burst into laughter, with one chiming in: “Good answer.”

“We’re always consummate chain people,” Bell continued. “Never once have I been leaning on that stake and having Dick on the other end pull me along to get going.”

The camaraderie among the four is evident as they share memories.

Fox, who is in his 55th season working the chains, started on the sidelines after his 1964 graduation from Schoolcraft High School.

“When I started, it was a three-man crew,” he said. “We always invited somebody from the opposing team to be on the chains. Then they started changing some of the rules.

“It’s always the opposing side, so we’ve heard a lot of opposing coaches over the years. We’ve learned a few new words.” 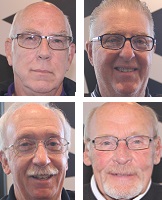 Before retiring, he was a middle school teacher in the district for 28 years and “doing that, you get to know all the kids so it was always fun to be down there watching the kids you knew.

“It’s different now (that he is retired). We kind of refer to the program all the time to make sure we know who’s who on the team.”

The gang has seen definite changes in the game over their tenure.

“We see a lot more conditioning and a lot more safety regulations,” Bell said. “The rules change and we try to keep up with that as much as possible.

“It’s a faster paced game than it was when we first started.”

Krum worked part-time on the chain gang from 1965 to 1970 while he attended Michigan State University and has been full-time the last 49 seasons.

One down side of the job, he said, is “Mother Nature. At times I wished we weren’t out there because we can’t leave. We’re stuck there rain or snow.”

Bell said weather seems to be one of the biggest changes over the years.

“At least half of the season we worked in Carhartts and snow was at least ankle deep,” he said. “Now we usually don’t see snow, but we get cold weather, mosquitoes, things like that.”

Krum really did have the best seat in the house to see his son, Dean, make an outstanding play several years ago.

“It was right in front of us in the end zone,” Krum said. “He knocked a pass down on the last play and we won the game. The whole crowd went crazy.

“I was in utter shock. I kept asking the guys, ‘He didn’t get a penalty, did he?’ It saved a two-pointer and we won the game by one.”

Krum is the one who protects the sideline.

“I’m the one who tells the coaches and players to please get back as we are going up and down,” he said. “You’ve got to talk to them all the time.”

Goldschmeding is the new guy on the crew.

A graduate of Portage Central High school, he moved to Schoolcraft 50 years ago and was recruited 12 years ago.

“We’ve been friends for a number of years, and they said they had an opening on the chain gang and would I be interested,” Goldschmeding said. “I fell for it hook, line and sinker.

“At the time I was assisting on the (Schoolcraft) sideline at football games, so I moved from one side of the field to the other.” 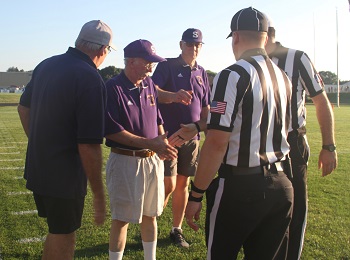 As an assistant coach, Goldschmeding said he was well aware of the guys working the chains across the field.

“I think every coach is aware of what is going on on the other side of the field because they have to be involved in every play,” he said. “They’re thinking two or three plays ahead all the time.”

One of the first things the crew does is meet with game officials to coordinate moves.

“When a first down is made, one of us will mark the spot and the other will extend the chain the full extent of the 10 yards,” Bell said. “We hold that position until the officials give us the nod.”

Sometimes the crew has to scamper down the field, which becomes time for Fox’s stand-in to appear.

Bell said the crew’s goal is to go unnoticed.

“If you hold up the game, that’s real bad,” he said. “You want to do your job, and if you’re not noticed and nobody has anything to say about the chain gang, you’ve done your job. That’s pretty much the way it works.”

Fox said about the only downside of the job is not sitting with their wives at games.

“All our wives sit on the other side without us,” he said. “You’ve got to have understanding wives.”

Sideline service one of many school connections

For Fox, Schoolcraft football has been a generational thing.

He lettered in football all four years and added, “My oldest son (Matthew) was on the championship team in 1990 and my other son, Mark, made all-state on both offense and defense, which was a rarity.”

“I’ve got four grandsons, and they all played for Schoolcraft.”

He also served on the Schoolcraft Board of Education for 34 years.

Bell played basketball for the Eagles and his son, Ross, played on the MHSAA Division 6 champion football team in 2001.

Krum did not play sports, but was a sports enthusiast in school.

He spent 29½ years on the school board.

Although he wasn’t involved in Eagles sports as a student, Goldschmeding’s two sons, John and Josh, played football at Schoolcraft and he was involved in the Athletic Boosters. He also has grandchildren involved in Schoolcraft sports.