The entirety of 2020 thus far has been a matter of conjecture. Trying to predict anything with any degree of certainty – including the sporting world – has proved to be a worthless expenditure of time.

That the Sturgis High School varsity football team would have as many victories in the first two weeks of the season as it had in the previous two years certainly wouldn’t have been the most absurd thought for Trojans fans. But based on recent history, it surely didn’t seem like the most likely scenario.

And it wasn’t the kind of lofty expectation anyone wanted to throw on the back of first-year head coach Chance Stewart, who was hired June 4.

The 2-0 start is the first for Sturgis since 2003. The 25-21 win over rival Three Rivers to start the year broke a seven-game losing streak for the Trojans, who finished 4-23 over the last three years.

Toss in the fact that the season itself almost didn’t materialize due to COVID-19 restrictions in the state, and that like every other program in Michigan, Sturgis will participate in the playoffs following an abbreviated regular season – and there’s a much louder buzz around town these days.

It will be only the Trojans’ third postseason appearance since Stewart’s final prep game at quarterback in Orange and Black in 2013 — a 16-0 Pre-District loss at St. Joseph. He went on to a brief stint at Western Michigan University and a phenomenal career at Hillsdale College, which yielded a G-MAC Player of the Year award, a single-season school and league record of 3,588 passing yards en route to a conference championship in 2018 and finishing with a school-record 10,064 passing yards. Stewart also recorded 73 career touchdowns in his 41 games played for the Chargers.

At just 24 years old, he’s not that far removed from the young men he’s now charged with overseeing at Sturgis. And in such bizarre times with protocols no one could have imagined just a year ago, Stewart is obviously pleased with how September unfolded.

“These kids are playing extremely hard right now,” Stewart said following the team’s 36-6 win over Allegan this past weekend. “The effort has been outrageously great for us the last two weeks. Finally getting the opportunity to come back after football was taken away from them, the effort was one thing we were hoping we wouldn’t have to worry about. And we didn’t have to. They came out ready to get after it.”

A total of 15 seniors are on the squad this year, but the roster changes weekly as Stewart has given junior varsity players an opportunity to play their way into Friday night spots with the new five-quarter rule instituted by the Michigan High School Athletic Association. Still, it’s the veteran group that mostly has fueled Sturgis so far.

“We have a great senior class here that’s leading the way for the rest of the guys, saying this is how things are going to be done now,” Stewart said. “That senior class really wants to go out on top and they really set the tone the first two weeks.”

Captains Rylee Cain (tight end/linebacker) and Brady Webb (quarterback, linebacker) were selected by their peers, and their production on the field has been solid. Webb threw for 81 yards and two touchdowns in the opener against the Wildcats. Defensively, Webb has logged 11.5 tackles (four for loss), and Cain has 13 tackles (four for loss) and an interception through the first two weeks, which included limited time on the field as the Trojans downed Allegan 36-6. Webb’s 28-yard hookup with Xander Cosby was a game-winner with 43 seconds remaining against Three Rivers. 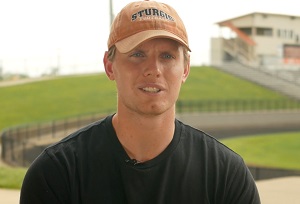 Stewart also pointed out the crucial play of senior Julian Alldridge, a right guard who will begin lining up at right tackle, and Jaden Bodi, who prepared in camp to play receiver and linebacker but was moved to right guard and defensive end.

“Alldridge has done a phenomenal job so far with helping out,” Stewart said. “From three weeks ago to now, (Bodi) is in two new positions with no questions asked. He just wants to do whatever he can to help the football team.”

Following Jimmy Lamb’s resignation from the head coaching position last year to focus on his new duties in an administrative role in the district, Sturgis athletics director Mark Adams believed Stewart, despite being green behind the ears, had enough experience on the field and the leadership skills to take over.

“That’s something you really need if you’re going to be a good coach,” Adams said. “When my son was growing up, Chance had his own football league at his house and teams from around (St. Joseph County) would come to it. He’s just that kind of guy. He’s organized, he’s imaginative, and talking to him in his interview about his X’s and O’s, I learned a lot of football from him then. He’s young and energetic and has a lot of great ideas, not just for football, but for the community and other things.”

Stewart always hoped to get an opportunity like this, he just didn’t expect it to come so quickly.

“It was special (playing quarterback here),” he said. “It’s special because my dad got to do it back in the 80s. Playing out here, wearing the Sturgis jersey has been really special to us.

Bigger than that, I think was just what the program was able to do for me to help me grow from just a 14-year-old scrawny kid into the person I am now. It’s because of those relationships I created out here. I was lucky enough to play for two coaches that really cared about their players in Coach (Bill) Keim and Coach Lamb — two guys to this day I still look up to. Now I get to give back in that same role that those guys were able to help me.”

PHOTOS: (Top) A Sturgis ball carrier follows his blocks in Allegan territory during Friday’s win. (Middle) Chance Stewart has returned home to coach the high school program for which he starred at quarterback less than a decade ago. (Top photo by Scott Rains; middle by Wes Morgan.)