That trend started to change in 2017 as Chippewa Valley went 4-1 against these teams (including a second win over Dakota in the playoffs). This season, the Big Reds took another step forward posting a 6-0 mark and capturing their first outright title in the Macomb Area Conference Red.

And for the first time in program history, Chippewa Valley is 11-0. The Big Reds were 9-0 in 1975, the first season the MHSAA sponsored state playoffs, but did not qualify for the postseason (only four teams in each of the four classifications were selected for the playoffs that first year).

Scott Merchant is in his 10th season as head coach at Chippewa Valley, and the Big Reds have made the playoffs eight times during his tenure. These past two seasons have been his best by far. Last season, Chippewa Valley finished 10-2 losing to Detroit Cass Tech, 32-26, in a Division 1 Regional Final.

Most expected a rematch of that game this week. But Dearborn Fordson (10-1) upset Cass Tech last week, 41-14, and Chippewa Valley will host Fordson in the Division 1 Region 4 Final at 7 p.m. Friday. The teams have met just once before – and that game, in 2003, also took place in a Regional Final with Chippewa Valley claiming a 30-12 victory.

Merchant’s team is experienced, confident and loaded with talent. He has four three-year starters and eight seniors starting on defense.

“Dakota set the bar for the whole conference,” Merchant said of Chippewa Valley’s sister school (both are in the Chippewa Valley school system) and biggest rival. “In the mid- to late 2000s they had like five or six Regional titles. Our streak of losing to Dakota started in ’04, and I didn’t get here until ‘09. It was huge for us to win in 2014. It was the first time we beat them in 10 years. That was a big weight being lifted.”

When a team loses so often to another, especially a rival, the losses and the years often run together. For the record, here’s how bad it got for the Big Reds:

“To this day I can’t explain what happened,” Merchant said. “It was one of the most disappointing losses I’ve had. A lot of it was mental.”

The tables have turned. Chippewa Valley has won five of the last six in the series and is two wins this month from reaching what would be the program’s second MHSAA Final.

The Big Reds’ success last season gave the players confidence and also fed their appetite for more. The 2017 team scored a school-record 463 points, and this season Chippewa Valley has scored 445.

The productivity is similar, but the means by which the offense this season has been successful is different. There’s a difference in personality. Last year Chippewa Valley was more of a finesse team that concentrated on the passing game. This team is more physical and its offense is geared more for the run, which is often more effective in November playoff games. 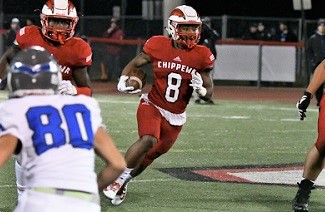 Quarterback Tommy Schuster is a three-year starter who threw for 3,100 yards over his first two seasons. His numbers (1,400 yards) are down a tad this season, but he’s thrown 20 touchdown passes and just one interception. Schuster also is carrying the ball more as he showed last week by rushing for 60 yards in the 51-10 victory over Dakota.

This added dimension has become a fine complement to the Big Reds’ top two running backs, Andre Chenault and Ja’Von Kimpson. Chenault is the team’s leading rusher with 888 yards and 13 touchdowns on 107 carries while Kimpson, who also starts at cornerback, is more of a featured back in 3rd down situations. He’s scored nine touchdowns rushing and one receiving.

“Our run game has been dominant all season,” Schuster said. “The offensive line has gotten better and better. It took a little time. They’re all (first-year) starters, and they’re confident now.”

Replacing the entire offensive line was the main concern for Merchant and his staff coming into this season. With just one senior, this group grew up fast. In the opener, Chippewa Valley trailed Saline 13-0 before the offense began to click and the Big Reds won 31-26. Senior captain Ryan Cyrowski, the center, is the leader and juniors Charles Wesley, the left tackle, and Donovan McBride, the right guard, have developed nicely. The Big Reds rushed for an-eye-popping 445 yards last week.

Merchant’s top two players could well be linebacker Marcel Lewis, who also sees time at tight end, and David Ellis. Ellis rarely comes off the field as he starts at receiver and defensive back and is a dangerous kick returner. He has 33 tackles on defense, five rushing touchdowns, six receiving scores, three more on kickoff returns and he’s returned a punt for a touchdown.

“We don’t have any weaknesses,” Schuster said. “This team, all year, hasn’t panicked. We’re ready for whatever happens. Last year’s team was like that, too. The reason we’ve been so successful (the past two seasons) is we have great players and great coaches.

“Playing quarterback on this team is a lot of fun. There’s so many options. If the run game isn’t working, we have no problem throwing the ball.

“I’ve grown up a lot over these three years. I’ve gotten to work on my speed, and I’m able to help the younger guys out too. It’s easier for me now. There’s nothing that’s new to me.”

The experience Schuster and many of his teammates have is a big reason Chippewa Valley has come out on top in a number of close games. In addition to the victory over Saline, the Big Reds held on to defeat Romeo (41-34) and Dakota (24-17) during the regular season. All three of those games were on the road.

“We’ve had way more close games this year than last,” Merchant said. “It’s been great to see the program grow.”

PHOTOS: (Top) Chippewa Valley’s defensive front lines up against Utica during a 49-0 Week 9 win. (Middle) David Ellis (8) follows his blockers into an opening against Utica Eisenhower in a 34-7 first-round playoff victory. (Photos courtesy of the Chippewa Valley athletic department.)