ORCHARD LAKE – George Porritt never seriously considered entering the coaching profession when he graduated from Hillsdale College in 1979 with a degree in both parks and recreation and physical education.

At age 14 he had worked part time in the parks and recreation department in Independence Township, a few miles south of Clarkston where he grew up. With that experience, Porritt thought he had found a career path.

But a year after graduating from college, Porritt, like most in their early 20s, was looking for work – any kind of work. During the fall of 1980, Dan Fife, the head varsity boys basketball coach at Clarkston, hired Porritt as his freshmen coach. The next school year he became an assistant football coach, along with current head coach Kurt Richardson, under Walt Wyniemko at Clarkston.

“I got the coaching bug,” Porritt said.

And he’s been a coach ever since.

Competing in the Detroit Catholic League Central, considered by many the state’s best football conference, is a challenge every year. Butting heads with legendary coaches such as Al Fracassa (now retired) at Birmingham Brother Rice and Tom Mach at Detroit Catholic Central is a daunting task, but Porritt and St. Mary’s have proved worthy adversaries.

The Eaglets are coming off a 12-2 finish and Division 3 title, their fifth under his leadership. 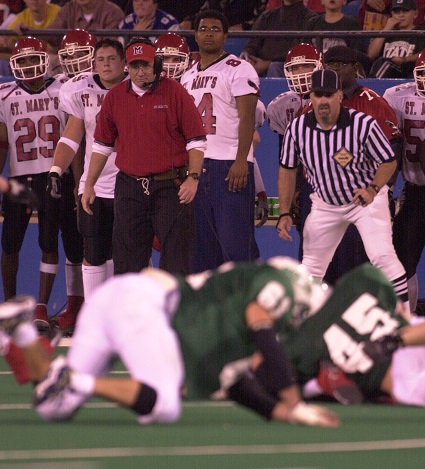 In 1986, St. Mary’s hired Porritt as a teacher, and that summer he became a varsity assistant football coach under Rob Haeger.  Porritt replaced Haeger in 1989.

His record heading into this season is 234-66, which ranks 10th among active coaches. Since 2006, St. Mary’s has reached the MHSAA finals six times. He’s coached 15 players who have gone on to play in the NFL.

But there’s something Porritt loves more than football, and that’s being a part of St. Mary’s.

He’s been the school’s athletic director since 1989, and the year before he was hired as the varsity basketball coach. He coached basketball for 22 seasons (he took six years in the mid-90s off to help his wife, Terry, raise their three children) before he retired from that position this past July.

Porritt’s success in football often overshadowed his success as a basketball coach. He coached the Eaglets to the Class B title in 2000, they reached the Class A Semifinals in 2006 and his teams won 10 Catholic League Central titles, six league championships, 12 district titles and six regional titles. His career record is 336-180.

When asked why he stepped away from basketball, Porritt said he pondered that move two years ago but continued on because of his relationships with the coaching staff and, of course, the players.

In the end he got out of coaching basketball to spend more time with his family. His son Kenny lives in Maryland and he and his wife are expecting their third child. His daughter, Marilyn, graduated from University of Oregon and recently moved to Nashville, Tenn., to begin working for Vanderbilt University. The Porritts’ third child, Mason, is a senior at Grand Valley State University. 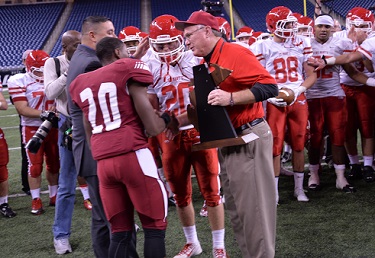 Terry Porritt travelled from Maryland and Tennessee earlier this month to visit her children, leaving her husband at home to coach football. Family time is precious, and the Porritts plan to spend more time with their family in the years to come.

But don’t expect George Porritt to leave St. Mary’s. Though he’s not coaching basketball, he’ll be at every home game because of his duties as athletic director. And aside from long road trips, he’ll be at the away games, too.

“I enjoyed my coaching at Clarkston,” he said. “And I wanted to get a teaching job there. But getting into education was tough then, as it is now.

“I love St. Mary’s. When you drive on this campus, it’s an awesome place to be. I want to work here as long as I can. I’ve met so many great people. Msgr. (Stanley) Milewski was awesome. (Headmaster) Larry Reeside has been tremendous. He inspired me and taught me so much. Then there’s the kids.”

Porritt mentioned one player, in particular, on the team this season as being a special person. His name is Josh Ross and his brother, James, plays for University of Michigan. Josh Ross is a 15-year-old junior but one of the team leaders, and he's already received scholarship offers from Michigan State, U-M and Notre Dame. Porritt said Ross is a no-nonsense type of player and one who helps maintain discipline, on the field and off.

Total, the Eaglets will return five starters on both offense and defense. Senior quarterback Brendan Tambone is back and joined by returning starting running backs Brandon Adams and Justin Myrick; Adams scored the lone touchdown in last season's MHSAA Final. Others of note include junior receiver/defensive back Kaylee Hamlee, who has offers from a handful of Big Ten programs, and 6-foot-5, 275-pound two-way lineman Cameron Kolwich, who will sign with Northwestern this fall.

Tom Markowski is a columnist and directs website coverage for the State Champs! Sports Network. He previously covered primarily high school sports for the The Detroit News from 1984-2014, focusing on the Detroit area but also contributing to statewide coverage of football and basketball. Contact him at tmarkowski@statechampsnetwork.com with story ideas for Oakland, Macomb and Wayne counties.