DETROIT – As the final seconds ran off the clock during the Division 4 championship game Friday night at Ford Field, it all began to set in for Detroit Country Day senior Danny MacLean.

“I’ve been here five times now, we hadn’t won a game at Ford Field,” the younger MacLean said. “I was always the ball boy, the water boy out on the field. Now, senior year, coming out here and getting one for that guy, it means the world to me. It’s the best feeling in the world.”

Country Day defeated first-time finalist Cadillac, 13-0, picking up its third-straight shutout in these playoffs. The Yellowjackets last won a Finals championship in 1999, that coming in MacLean’s second year as the head coach at the school. His teams fell a win short in 2007, 2008, 2012, 2016 and again in 2019.

“I thought I couldn’t win in Ford Field. I was like, ‘Can we get the Silverdome back?,’” MacLean joked after the game. “It is very good to be back (winning). This was wonderful to do this, especially with this group of kids in particular. I said it many times this week. I was a single guy when I started at Country Day 36 years ago, and (Danny) is my youngest child of five, and it’s just a joy.”

MacLean’s children – Jack, Maureen, Mike, Kathleen and Danny – all graduated (or will) from Country Day. Each of the three boys played football for the Yellowjackets.

MacLean and fellow senior Nick Wachol spearheaded a dominant Yellowjackets defense, which limited the Vikings to just 166 total yards. MacLean and Wachol each finished with a team-leading nine tackles. Wachol had three tackles for a loss to go along with two sacks. MacLean had a key interception late in the second quarter, helping to keep Cadillac off the scoreboard just before halftime. 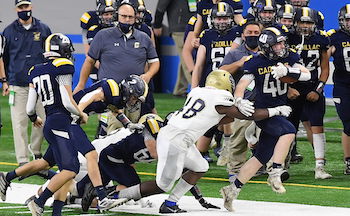 “We’ve been riding our defense all year,” Coach MacLean said. “They just have a tremendous amount of pride, and they just do their job. I would be remiss if I didn’t mention my coaches. John Wilson, Steve Mann, who’s been with us a long time. Dave Furlong and Jake Topp, who was really instrumental tonight. He is more of an offensive guy in certain ways, but he designed that scheme to stop their option and the kids executed.”

Cadillac used five running backs in the game, along with junior quarterback Aden Gurden, who led the team with 14 carries. Junior Collin Johnston led the Vikings with 53 yards rushing, while sophomore Kaleb McKinley and Gurden added 39 and 37, respectively.

Coach Cody Mallory’s team moved the ball at times against Country Day’s stout defense, but couldn’t finish when it needed to.

“Their defense is very good; they’re very physical,” Mallory said. “I felt like this was the first time all year that we haven’t been able to move the ball. Even in our losses prior to this, we were able to get things going on offense. Country Day was extremely physical up front and very fast on the back end.”

The Yellowjackets’ offense scored its lone touchdown of the game with a 12-play drive which took 6:33 off the clock to open the third quarter. Four Country Day players ran the ball, with freshman Gabe Winowich capping things off with a four-yard touchdown to give his team a 13-0 lead.

From there, the defense took over for the Yellowjackets. Cadillac had just six possessions in the game. The Vikings punted twice, turned the ball over on downs twice, threw the interception to MacLean, with the sixth possession ending at halftime. Senior Joe Miller collected eight tackles in the win, while juniors Caleb Mathis-Miller and Brandon Mann each added six.

Offensively, Country Day just wore Cadillac down. Junior Parker Yearego had 12 carries for 71 yards, and Mann had 11 more for 40 yards. In all, the Yellowjackets rushed the ball 36 times. Mann was also 11-for-14 passing for 106 yards.

“If you can keep the ball away from them, then they get frustrated,” MacLean said. “They like to bleed the clock. We kind of flipped the script on them. The key was our defense allowed us to get them off the field at times.”

While Country Day was making its ninth trip to the championship game, it was Cadillac’s first time playing for a title. Mallory was proud of the way his team battled Friday night and excited his program could proudly represent northern Michigan.

“I feel like football up north does get overlooked a bit,” Mallory said. “I’m really happy our conference had two teams go deep in the playoffs. That says a lot about where football is up there.”

Mallory said it was a great learning experience for his team.

“It takes failure for you to grow,” Mallory said. “While there were a lot of successes to get us to this point, in this game, we fell short and we’re going to have to grow.”