DETROIT – Davison senior wide receiver Latrell Fordham strolled into the postgame press conference with his left arm in a sling, and an enormous smile on his face.

Fordham played a huge role in Davison’s 35-25 victory over Brighton in the MHSAA Division 1 Final on Saturday at Ford Field – before landing awkwardly and fracturing his left elbow late in the second quarter.

“It hurts a lot, and I need surgery, but winning a state championship overrides all of that,” said Fordham, a 6-foot-3 Ball State commit who had four catches for 88 yards before his injury, including an electrifying 74-yard sprint along the Davison sideline that helped his team assume control in the second quarter.

Davison (12-2) won the first football Finals championship in school history and the first title for a Saginaw Valley League school since 1999 Saginaw High, which was led by Charles Rogers and also featured LaMarr Woodley.

The Cardinals, who had won their first four playoff games in come-from-behind fashion powered by their running game, shifted gears completely Saturday.

Davison never trailed and pulled away behind an impressive passing attack, as 6-3 junior quarterback Brendan Sullivan completed 14-of-19 passes for 290 yards. He connected with six receivers.

Brighton coach Brian Lemons said after the game that his team was committed to shutting down the run, which made it susceptible through the air.

“We had to pick our poison,” said Lemons, whose team stunned top-ranked Belleville 22-19 in the Semifinals to earn its first Finals appearance. “We had some single coverage, and they did a great job of connecting in those situations.”

Sullivan opened the scoring on a one-yard plunge in the first quarter set up by a crucial two-yard, fourth-down completion to Fordham and a 14-yard pass to Harrison Terry on the next play. Terry led all receivers with six catches for 94 yards.

After a Brighton field goal narrowed the lead to 7-3 in the second quarter, second-year Davison coach Jake Weingartz seized on an opportunity to go for a home run.

“We had trips (three receivers) to one side and Latrell by himself on the other side,” explained Weingartz. “He had single coverage and the safety shaded to the trips side. We had to take a shot. We’re not going to beat our head against the wall and try to run against a loaded front.”

Fordham took off on a straight go route along the Davison sideline and Sullivan delivered a strike, which Fordham caught in stride as he sprinted the rest of the way for a 74-yard score and 14-3 lead. 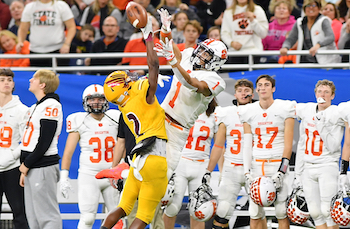 “We were waiting for the right moment, and on that play we had the matchup we wanted,” explained Fordham, who expects to miss a good portion of basketball season, but hopes to be back by March. “Brendan made a perfect throw. I just had to grab it and take it to the house.”

That play brought the huge crowd from Davison to its feet and seemingly opened the floodgates. The Cardinals scored on a one-yard run by Carter Cryderman before halftime and a 10-yard scramble run by Sullivan early in the third quarter to take a seemingly comfortable 28-3 lead.

The Bulldogs scored 16 points in a row – on a one-yard run by Nemecek and a 27-yard pass from Newburg to Nemecek (along with a pair of 2-point conversions) – to close to within 28-19 with four minutes remaining, bringing the orange-clad Brighton fans to life.

“All I can say is that I’m super proud of everybody,” said Newburg. “We fought to the end.”

With Brighton back within striking distance, Sullivan took his turn in the quarterback shootout.

He connected with senior Caleb Smith on a 63-yard pass down to the 1-yard line, which Cryderman took in on the next play to push the lead back to 35-19.

Even then, Brighton was still not done, as Newburg completed six passes on the next drive, including a three-yard TD connection with Austin Lin with 43 seconds remaining. It wasn’t until the ensuing 2-point conversion pass fell incomplete that the game was decided.

Davison finished with a slight 441-425 edge in total yardage, but it was the efficiency of Sullivan through the air which proved to be the difference.

“I told my coach to trust me in this game,” said Sullivan, who stepped up as a junior on the biggest stage. “I want the ball in my hands in those pressure situations.”

The game featured two schools making their first appearances in the Finals, which is becoming more and more rare after 45 years of MHSAA Playoffs, which began in 1975.

That first-time excitement was apparent as both communities turned out in droves at Ford Field, Brighton in orange and Davison in gold.

Adding to the excitement was the fact neither team was expected to make a long playoff run after finishing second in their respective conferences – Davison in the Saginaw Valley League Red (behind Lapeer) and Brighton in the Kensington Lakes Activities Association West (behind Plymouth).

Davison senior linebacker Logan Pasco was all over the field with a game-high 16 tackles, while Smith had nine tackles and defensive end Harry Unger made seven stops. Ian Hummel led Brighton with eight tackles, and Cole Riddle and Carson Billig each made six.