But all he wanted to talk about after DeWitt’s 40-30 victory over River Rouge in the Division 3 Final was the character and drive of his players. That’s what was first and foremost on his mind.

“It’s unbelievable, but I think the greatest part of it all is this is such a great group of kids,” said the veteran coach, who previously has coached four Finals runners-up, the most recent in 2013. “I’ve been saying it all year long, but their character is unbelievable – the motivation, the drive, the leadership. If there’s a group of kids who deserve to win a state championship, it’s this group. I’m so happy for them.”

And it didn’t take long Saturday for Zimmerman and his group to take steps toward earning it.

Junior quarterback Tyler Holtz broke open a scoreless game at the 5:50 mark of the first quarter, connecting with senior Blake Beachnau for a 15-yard touchdown to make it 7-0.

River Rouge would answer back early in the second quarter, as senior Mareyohn Hrabowski would find junior Jalen Holly for a 52-yard touchdown. A two-point conversion pass from Hrabowski to freshman Nicholas Marsh gave Rouge an 8-7 lead.

But it was at that point that the DeWitt defense stepped things up. And it also was the point when Holtz began to take over the game. The Associated Press’ Player of the Year in Divisions 3 and 4 threw two more touchdown passes before halftime, then added another midway through the third quarter to help his team to a 27-8 lead. All three scores went to different receivers – eight yards to senior Andrew Debri, 35 yards to senior Nick Flegler and 25 yards to junior Thomas McIntosh. 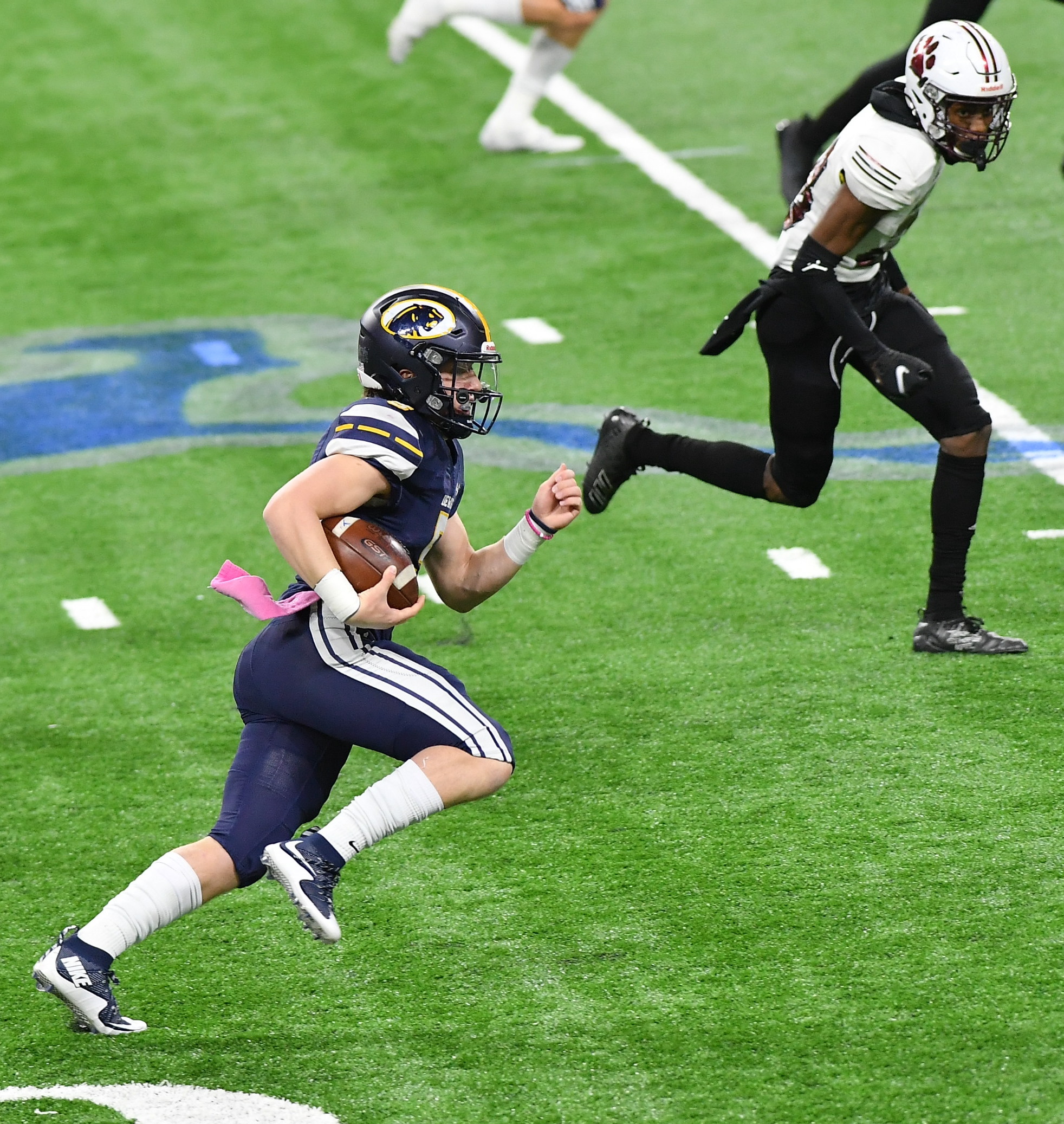 “That’s why he’s the player of the year,” Zimmerman said of his junior signal caller. “He was front and center today, and his composure was unbelievable. He’s just off the charts, and he was the difference-maker in this game.

“We felt that we had the matchup advantage in the passing game going into this because our receivers are very good. We felt like we could throw the ball, too. We just had to mix in the run enough to take some shots without them just playing pass the whole time like they did against (Detroit Martin Luther) King (in the Regional Final).”

Holtz finished the game 12-of-16 passing for 177 yards and four touchdowns. He also rushed the ball 15 times for a game-high 118 yards – and another score. River Rouge head coach Corey Parker admitted his team couldn’t find a way to stop Holtz.

Hrabowski did his best to keep his team in the game. A four-yard touchdown run late in the third quarter and a 12-yard touchdown pass to Marsh early in the fourth helped keep it a two-touchdown game. He also added a three-yard touchdown run and ensuing two-point conversion to cap off a game in which he threw for 227 yards and ran for another 94, while accounting for all of his team’s touchdowns.

“They didn’t give up. Their kids played hard,” Zimmerman said of Rouge (9-2). “They’re the defending state champs so we knew they weren’t going to go easy. We kept scoring and they kept coming back. I’m just so proud of our kids.”

Rouge defeated Muskegon, 30-7, in last year’s Division 3 Final. Hrabowski returned this season, but many of the players on this year’s roster were new.

“Our goal is to get here (every year),” Parker said. “If you’ve got young guys making plays like that, you know exactly what your future looks like, so I’m pretty excited about what we’re going to do moving forward.”

DeWitt (12-0) capped off a magical season which saw its offense put up nearly 500 points in 11 games played, while its defense was dominant, allowing just 78, including Saturday’s Final. Flegler and fellow seniors Grant Uyl and Cooper Brumfield all led the team with 10 tackles each.

“We have unity, no matter what, on defense,” said Flegler, who also handled all the kicking duties for the team. “Our mindset is always, ‘What the next play? What’s the next play?’ We don’t linger on failure and we’re always looking to improve on the next play, and I think that’s what brings us success.”

PHOTOS: (Top) DeWitt junior Thomas McIntosh (10) looks back to see if defenders are closing in as he makes his way toward the end zone Saturday. (Middle) DeWitt quarterback Tyler Holtz breaks into the open. (Click for more from Hockey Weekly Action Photos.)