DEXTER – Dexter has long had outstanding football facilities, a large fan base and the support of school officials. What it hasn’t had in recent years is a winning football team.

With each passing week, however, it looks like that is about the change.

The Dreadnaughts enter tonight’s game at Tecumseh with a 3-2 record and legitimate chance to make a run at the MHSAA football playoffs over the next few weeks. What’s remarkable is Dexter is seeking its first appearance in the tournament, which began in 1975.

The timing right now has a lot to do with the arrival of head coach Phil Jacobs. The Adrian native spent nearly two decades on the Maples staff, including 11 seasons as head coach. He stepped down as the head coach after the 2014 season and spent two seasons as an assistant at Siena Heights University, before he was brought into the Dexter fold by Timmis, his former boss at Adrian.

“It took a lot of persuasion,” Timmis said.

Jacobs called it a “full-court press” to lure him back. Whatever it was, it looks like a successful move for Dexter.

“I was confident it would be,” Timmis said. “What I knew about Phil from when I was superintendent and principal at Adrian was he is a fantastic teacher. When we were working on a lot of academic improvement, Phil had a model classroom. I knew what he could bring to us was a lot more than just a football coach.”

Dexter was looking to hire a football coach a couple of years ago when Timmis made a short list of coaches from across the state that had rebuilt programs. Jacobs was on the list but wasn’t interested in coaching himself. Dexter made a hire, but it was short-lived. That coach left after only a short time on the job. 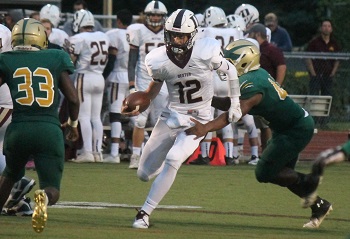 Jacobs came on board in late April and started working with the Dreadnaughts players, getting them into the weight room in particular. Dexter went 0-9 in 2017, but as the season went on, Jacobs and others saw progress.

“He was putting the pieces together,” Timmis said.

Dexter began this season with a 41-game losing streak and lost the season opener. In Week 2, however, Dexter pulled out a 36-22 win over Ypsilanti Community to break the streak. The next week the Dreadnaughts won again, this time a 37-14 win over Ann Arbor Huron. In Week 5, they topped Adrian, 42-30, as junior receiver Antwan Ficklen caught six passes for 177 yards and three touchdowns to lead Dexter to the win. Sophomore quarterback Colin Parachek threw for more than 300 yards and ran for a couple of touchdowns.

The Dreadnaughts aren’t just winning – they are exciting. Through five games, Dexter is averaging 30.8 points per game.

That Adrian win leaves Dexter with regular-season games against Tecumseh (2-3), Pinckney (1-4), Ypsilanti Lincoln (4-1) and Whitehall (3-2). Win three, and the team is automatically in the playoffs.

Jacobs points to three differences with this season’s Dexter team. For one, the players’ commitment to the weight room is paying off.

“We are stronger. With strength comes confidence,” Jacobs said. “We are nowhere near where we want to be or can be, but we are headed in the right direction.” 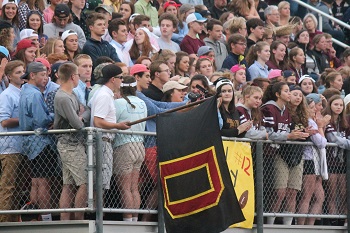 Another difference is the players’ football knowledge is growing. With each week of practice, each week of repetition, Jacobs said the players are learning more about the game.

“Our football I.Q. is so much better than last year,” Jacobs said. “Last year, we were yelling things from the sidelines on every play, ‘get here,’ ‘get there.’ This year, we aren’t doing that as much. Our kids are learning. They speak our terms now.”

Lastly, Jacobs said having enough numbers so that his players are starting on only one side of the ball has paid huge dividends.

“In the third and fourth quarters, they are fresh,” he said. “They are learning one position. Plus, when you get your athletes playing on only one side of the ball, it frees them up to play special teams. You find creative ways to get your best kids on the field.”

Dexter’s most recent winning season was a 5-4 finish in 2010. The Dreadnaughts have had two winning seasons total during their players’ lifetimes.

“It’s great to see the kids believe in themselves,” Timmis said. “The whole community is feeling it right now.”

Dexter athletic director Mike Bavineau said the school and community are excited about the football team. There’s a buzz in the halls and at the Dexter field on Friday nights.

“The kids are excited, everyone is excited,” he said. “When you can win a little bit, it breeds confidence.”