After 85 years of playing prep football in the same location, Dundee will close the doors on its stadium tonight with plans to move into a new athletic complex next fall. Vikings head coach Kyle McElvany called tonight’s game against undefeated and state-ranked Hillsdale one more chance for the Vikings to make an ever-lasting memory.

“There is so much tradition and history here over the course of 85-plus years,” McElvany said. “It’s humbling. We hope to go out and make our alumni and community proud.”

Dundee hasn’t been to the playoffs in seven years, but a victory over Hillsdale would make certain the Vikings are in the 256-team field when the 11-player tournament pairings are announced Sunday. It would make for a memorable way to close out the history of the stadium, too.

Late last month, school officials announced that 1969 Dundee alum John D. Craig, retired chairman, president and CEO of EnerSys, has donated $1 million to be used exclusively toward the creation of the John D. Craig and Family Athletic Complex. The school will begin next week discussing the new complex at a public meeting. The plan is to build the new stadium in time for the 2020 season opener against Romulus Summit Academy North.

The Vikings have been playing football for decades in the current stadium, located behind what once was the high school in the village of fewer than 4,000 people. The new athletic complex will be built on the northwest side of the new high school.

“Our administration has already started to work on the project from a development standpoint, and I hope to get involved as well once our season is wrapped up,” McElvany said.

The new stadium will have a total visitor seating for approximately 2,500, new stadium lights and a new engineered natural grass athletic field. The facility will be capable of hosting football games, track meets and band festivals, and also feature a new scoreboard, new permanent concessions and restroom facilities.

The old stadium has been home to several great memories for Vikings fans over the years. One of them came earlier this season when Dundee’s defense made a goal-line stand during the final seconds to hold on for a 15-14 win over Ida. It was Dundee’s first football win over Ida in six years.

“To see the crowd and community on the field embracing those kids after that game was very special,” McElvany said.

Over the years, Dundee has won championships, completed undefeated seasons and hosted playoff games in the old stadium. In 2011, Dundee was still recovering from a tornado that caused millions of dollars in damage in the community when its football team brought some solace to the area with an 8-3 record and the only playoff win in school history. 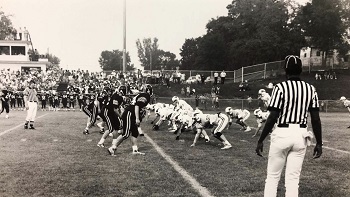 “The greatest game ever for us in that stadium was the 2011 District playoff game versus Brooklyn Columbia Central,” said Dylan Williams, a 2012 Dundee graduate. “The field was all torn up from the tornado still. We took the lead in the fourth quarter with about a minute to go and held them.”

The most successful era for Dundee came during the 1960s when the Vikings won both Huron League and Southeastern Conference championships. Dundee didn’t lose for more than three years from 1963-1966 (finishing a combined 32-0-3), an accomplishment that remains the longest unbeaten streak in Monroe County Region history.

“The undying friendship, teamwork and dedication to a goal learned on this field will be with us all forever,” said Bob Busz, who played for those teams and graduated in 1966.

Ted Rath, a 2002 Dundee graduate and current assistant coach with the Los Angeles Rams, recalled several great memories from his time at Dundee. He was a student manager in 1994 and 1995 when his brother was playing quarterback, and then played for the Vikings himself. He met his wife, Robin, on that field while she was attending cheerleading practice.

“So many memories come flooding to mind when I think of my football experiences on that field,” Rath said. “I have been blessed to travel this great country and the world because of the sport of football. I have been to places like Wembley Stadium in London and Lambeau Field in Green Bay and many places in between. When I think about all the places that this sport has taken me, I realize that none are as sweet as that field in Dundee, Michigan.

While the new athletic complex is a welcome addition to the district and community, former players and coaches can’t help but recall the great times they made in the old stadium. Thoughts of fans rushing onto the field, wins over rival Ida and simply lining up for the kickoff at games at the stadium will keep the facility alive for Vikings fans for years to come.

Tyler Anson, a 2006 graduate, said he used to find his favorite spot at every home game to quietly reflect right before kickoff.

“My favorite memory from the stadium was always standing in the back of the end zone right before the national anthem,” Anson said. “There was something about being under the lights, looking down the field seeing the crowd, and hearing the anthem knowing you’re about to go to war with your brothers. It’s a feeling that will always give me chills.”

PHOTOS: (Top) Dundee’s football stadium has hosted games for 85 years. (Middle) Vikings fans stretch into the hillside next to the bleachers during a game. (Top team and middle football photos courtesy of Kyle McElvany; press box and field photos by Doug Donnelly.)