DETROIT – It was never really a matter of if, but rather when Donovan Edwards was going to bust a big run.

On Saturday, the West Bloomfield senior answered the call, scoring on runs of 71 and 78 yards en route to a three-touchdown afternoon while leading his Lakers to a 41-0 victory over 2019 champion Davison in the Division 1 Football Final at Ford Field.

Edwards, who has signed to play collegiately at the University of Michigan, finished the afternoon with 257 yards on just 14 carries. Despite not playing in the fourth quarter, he totaled the eighth-highest rushing total in MHSAA Finals history. And it was enough for West Bloomfield head coach Ron Bellamy to make a major declaration.

“This here is the best football player in the state of Michigan,” Bellamy said of Edwards. “Five star. Big college. Whatever it may be. Teams come to stop one football player, and he had 200-some yards (today).

“I’m from Louisiana, and I had a chance to play against Ed Reed in high school. I had a chance to play against Reggie Wayne, Eli Manning, I played against NFL Hall of Famers in high school, on the same field, and he looks like them. It ain’t the cliche, ‘Best player on the field.’ He looks like a dude that’s gonna play for a long time in the NFL and be an all-American at the University of Michigan. Obviously some things have to happen in his favor, but you saw it. He just looks different from everybody else on the field.”

Edwards’ talents were on display right away. After the two teams traded early fumbles, Edwards broke free on the first play from scrimmage for a 78-yard touchdown to give his team a 7-0 lead.

West Bloomfield would expand its lead to 17-0 by halftime thanks to a 39-yard field goal by senior Jake Ward and a 13-yard touchdown run by senior Mekhi Elam. 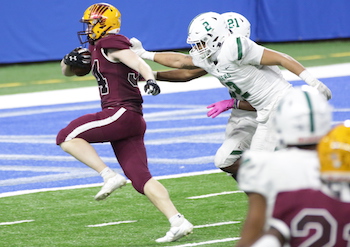 The Lakers defense was on display all afternoon, limiting the Cardinals offense to just 136 total yards. It forced a pair of fumbles and converted them into 14 points. Senior defensive end Niles King stripped the ball from the hands of Jay’len Flowers and returned it 40 yards to give his team a 24-0 lead less than a minute into the second half.

“We know that when you come to Ford Field you’ve got to play defense,” Bellamy said. “Davison has a heck of a defense, but our defense was better today. Those guys were lights out.

“We had an early fumble in the game and they were playing Davison smash-mouth football. They hit us in the mouth. I told the kids, defensively, ‘They’re going to hit us in the mouth early; it’s how you respond to adversity.’ Once they fumbled the ball and we got it back, our defense was balling out.”

West Bloomfield kicker Jake Ward connected on a pair of field goals, from 39 and 45 yards out, while converting all five of his point-after attempts. All seven of his kickoffs went for touchbacks.

Davison, which defeated Brighton 35-25 to win the 2019 championship, was playing without its regular-season starting quarterback Brendan Sullivan, who enrolled early at Northwestern University. The Cardinals also suffered a loss in-game, when senior defensive end Harrison Unger went down with a leg injury. He left the game with eight minutes remaining in the first quarter.

“Harry is our best player,” Davison head coach Jake Weingartz said. “Defensive end, he plays tight end, slot receiver. He does a lot for us on both sides of the ball. It was unfortunate because he’s a huge part of our gameplan. It was rough.”

Without him, Davison had trouble stopping Edwards and Co. Senior Clarke Hamilton led the Cardinals (11-1) with six tackles.

“If anyone has watched us play, it was very uncharacteristic of us,” Weingartz said. “I just think we struggled with their speed. Their front six is real good. We missed a lot of opportunities. You just can’t miss them here, and you definitely can’t miss them against a team like West Bloomfield.

“I’m very proud of our kids for battling all the adversity this year, with the stop and start and losing our quarterback to early graduation. Obviously this is not how we wanted it to end.”

For West Bloomfield (10-1), Saturday’s championship was the first in school history. The Lakers lost to Clarkston, 3-2, in the 2017 Division 1 title game.

“It’s surreal. It’s so, so surreal,” Bellamy said. “We’ve waited so long for this moment. These last few years, since we lost (to Clarkston), everything in my power, in my coaching staff’s power, we wanted to develop a champion. We’ve been so close, but yet so far.

“It’s a special feeling. We’ve made many sacrifices this year. The kids’ mental health was challenged with the shutdowns. But we’re here, we made it here. We felt we had a good football team, and we had a chance to win a state championship.”