That because he was about 6 months old.

“He was in a stroller,” said his father, Hudson head football coach Dan Rogers. “When he says he grew up around Hudson football, he means it literally. He was always on the sidelines with me. He was a ball boy by the time he was 5.”

Payton has a much different role these days. The 17-year-old senior is a starting linebacker, top tackler and emotional leader for Hudson’s powerful defense that will play for the Division 8 championship Friday at Ford Field against Beal City. Hudson is 13-0 and one of nine remaining undefeated 11-player teams in the state.

It’s little surprise that Payton grew up to be a great defensive player. His father had coached the Hudson defense for nearly two decades before becoming the head coach at the start of the 2020 season. The Tigers were coming off a 2-7 season during which several sophomores – including Payton – were pressed into starting roles because the team was so young.

Those five are still playing and now have starring roles.

“They all had a big part of our Semifinal win,” Coach Rogers said. “That was nice to see. They all started that sophomore season, and there were some rough times. That hard work is paying off.”

Payton was among those starters, although he was the starting nose tackle, despite being somewhat undersized.

“He got in there and got beat up a little bit,” Coach Rogers said. “That was his role. He was quick, and he always battled hard.”

After last season, when Hudson went 4-4, Payton told his dad he wanted to play linebacker this year. He worked the entire offseason on getting bigger, stronger, and faster so he would be ready for his new role.

The work was more than worth it.

Payton leads the team in tackles with 95 and solo tackles with 38. The 5-foot-6, 150-pounder is tied for the team lead in interceptions and second with six tackles for loss. 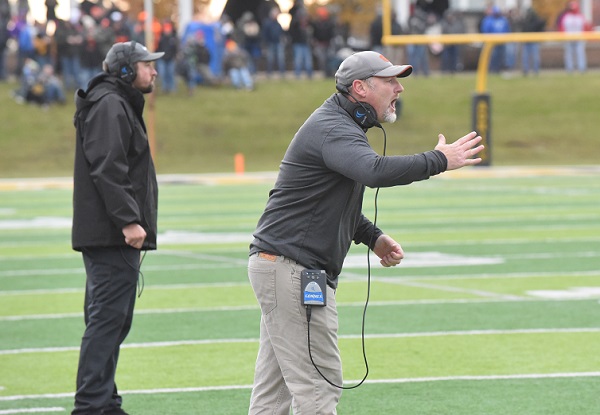 “He will watch film with me and pick things out, what works, what he wants to do, what doesn’t work,” Rogers said. “If I don’t agree with something, I’ll tell him, but he’s the coach on the field. He makes our calls and gets kids into the right spots. He’s become really good at watching film and breaking things down.”

Studying – not just watching – game film has been a passion for father and son. Coach Rogers said he took some advice from other coaches he knew who had coached their sons, and he sets some restrictions on watching film with Payton.

Payton said the two of them know when to talk football as coach-player and when to be father-son.

“I’d say we mix it up,” he said. “Tuesdays at Hudson has always been defensive film day. That goes way back, so I’ve always watched film with my dad. This year it became a little more important because I needed to know more about the keys and the other team. My dad always taught me little things about football, but this year, with watching film, he’s taught me so much.”

The Hudson defense has been outstanding from the start, posting seven shutouts in 13 games. From Week 4 through the Regional Final, Hudson gave up just two touchdowns total.

Five Tigers defenders have at least 50 tackles on the season – Cameron Kimble has 85, Austin Marry 65, Ethan Harris 53 and Bronson Marry 53. In the Semifinal game against Ottawa Lake Whiteford on Saturday, the Tigers gave up 22 points over the first 14 minutes, made some adjustments, then shut out the high-scoring Bobcats the rest of the game. They forced three turnovers along the way.

On Whiteford’s final drive, the Bobcats got inside the Hudson 5-yard line with 1.9 seconds to play, but the quarterback came up a yard short on a 4th-and-6 play. Harris and Nick Kopin made the stop, ending the Whiteford scoring threat and turning the ball over to Hudson for the final play of the game.

“Harris and Kopin were part of that group of sophomores,” Rogers said. “They made a great tackle on their quarterback.”

Beal City will bring an offense averaging 35.5 points a game into the championship against Hudson.

“It’s certainly going to be a challenge,” Rogers said. “They are big and physical.”

Hudson made back-to-back Finals appearances in 2009 and 2010. Payton had a front row look for both games, serving as the ball boy for the Tigers. 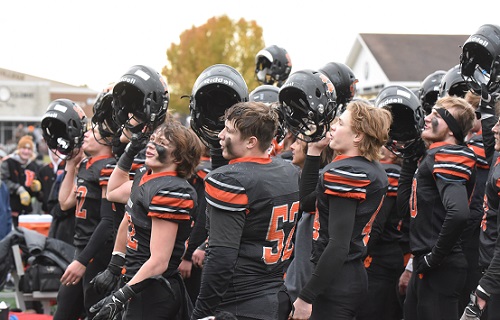 Payton wasn’t just handed the role of ball boy. He had to learn from older ball boys and move up into the ranks.

Hudson has a storied football history, most famous for the 72-game win streak during the 1960s and 1970s that drew national attention. One of the players on the 1975 team was Chris Luma. Luma would go on to coach Hudson, stepping down after the 2019 season. He was the coach who brought Rogers onto the staff. This season, Luma has a seat in the Hudson coaches box, talking in the ear of Rogers and other coaches about what he sees on the field.

It's a continuation of the Hudson football community and family. Roots run deep in Hudson, and the football team is usually top of mind.

Rogers is part of that family. The 1992 Hudson graduate – yes, he played for the Tigers – will not only have his son Payton on the field, but his younger son, Harper, 8, will be the ball boy for the game. His wife, Lindsey, and daughter Mia, 13, will be in the crowd.

“Everything is family around Hudson,” Payton said. “Our team has grown up together, and this year there have been so many people at our games, past players and guys we used to look up to. It’s been great seeing them come back for games.”

While a trip to the Finals is nothing new for the Tigers – Friday will be their fifth all-time appearance – it’s always a big deal in Hudson.

“I’m so happy for these kids and this community,” Coach Rogers said. “It’s a special thing to be a Hudson football player and live in Hudson and coach. The players are rewarded, and the whole community really supports the team. I’m just so happy for everyone right now.”