Tom Essenburg remembers one night 50 years ago like it was just last Friday.

Rain had been falling steadily on Sept. 21, 1962, as the Holland and Muskegon Heights football teams took the field at Holland's Riverview Park for their Week 2 game.

Heights was coached by the already-legendary Okie Johnson, and at his disposal were a handful of speedsters who could potentially make for a long night for Essenburg, a senior defensive back – although he had a hopeful hunch the wet weather might hinder the Tigers' passing game.

“I’m thinking to myself, what’s going to go on today?” Essenburg remembered this week. “They threw six passes the whole ballgame, because it was so wet.

“They didn’t complete one to a Muskegon Heights player,” he added. “But they completed five to me.”

Friday marks the 50th anniversary of Essenburg grabbing five interceptions, an MHSAA record for one game that twice has been tied but still stands half a century later.

The next day's Holland Evening Sentinel first told of Essenburg's final interception, which he returned for a touchdown with 13 seconds to play in the 12-0 victory. The report's seventh paragraph explained  that Essenburg “had quite a night with enemy aerials."

Essenburg, by his own estimation, was good but “not anything exceptional” at football. But he'd go on to captain the Western Michigan University men’s tennis team and officiate five MHSAA Football Finals during a 41-year career wearing the stripes. He's reffing still – he will be in the white hat Friday at Zeeland East – and owns and operates a fitness club in Grand Rapids.

It is more for those reasons that Essenburg is known well in the west Michigan athletic community. But the times have come, every few years or so, when someone runs across his name in the MHSAA record book, or recognizes his name from the record board at Holland High. 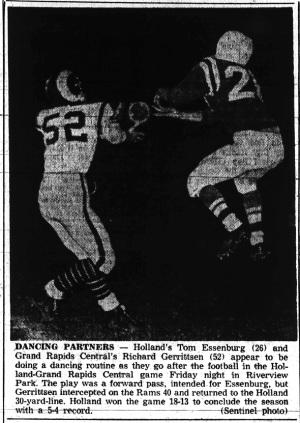 “I had a job to do. I was a defensive back. My job was to make sure people didn’t get behind me,” Essenburg said this week. “I don’t think I counted (the interceptions) during the game. Not until I got the paper the next day did I think that (five) must have been right.”

When his family headed to Holland to see relatives, Kristin Callis remembers her dad asking her and her siblings if they’d like to stop by the field to see where he had his history-making moments.

“Of course we would groan and act like it would be the end of the world to make the stop. I only recall seeing the field once,” said Callis, the eldest of Essenburg’s three children. “It was really just a funny thing my Dad would say to us. He was proud yet humble when it came to his accomplishment.”

Essenburg also played baseball, basketball, and ran track at points during his high school years. After a standout tennis career with the Broncos, he became a teacher and later athletic director at Allegan High – and as a coach he started a boys tennis program that became one of the state’s elite under successor Gary Ellis.

Essenburg does most of his officiating these days for football and softball, and also has worked at the collegiate level. This spring, Essenburg received his 40-year service award from the MHSAA for his work between the lines.

“Excelling in high school sports charted the course for the rest of my Dad's life,” Callis said.

Essenburg owns Endurance Fitness in Grand Rapids. Previously, he started the Ramblewood Raquet Club in Grandville and managed the East Hills athletic club for nearly two decades. All three of his children got their first jobs at his club, and he taught them to play as many sports as they had interest. Essenburg's tennis skills no doubt passed down to Callis, who played at Hillsdale College. And, of course, the children have a pretty good idea what's happening on the football field – when they were kids, Essenburg would quiz Kristin, Heidi and Ryan on football officiating signals. 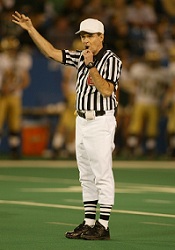 Essenburg's listing is the oldest for a defensive statistic in the MHSAA football record book. (Temperance Bedford's Tony Gill in 1990 and Concord's Zach Brigham in 2010 also grabbed five interceptions in one game to tie the record.)

But in a final ironic twist, recognition didn't come right away. Back then, a local service club sponsored a Player of the Week award for Holland's football team, with the best player each game honored the following Thursday. For the Heights game, Essenburg had to be a shoe-in.

The award that week went to a defensive lineman.

"I was just heartbroken. I said, 'What more could I do?'" Essenburg said. "But that was fine. Later in the year I got it."

“It’s a good thing I’m a referee,” he then joked. “If I was (a back judge), I might be really lenient with pass interference.”

PHOTOS: (Top) Tom Essenburg was mentioned prevalently in the Sept. 22, 1962 Holland Evening Sentinel for his five interceptions the night before against Muskegon Heights. (Middle) Later that season, the Sentinel also ran a photo of Essenburg attempting to haul in a pass. (Bottom) Essenburg has officiated in five MHSAA Football Finals, the most recent in 2004 at the Pontiac Silverdome.