Buried in the text on the fourth page of the Saturday, October 27, 1888, Detroit Free Press is a single, concise sentence bearing a minimum amount of detail.

“The Windsor foot ball team will play the Detroit High School team this afternoon at 3.”

To date, this is the earliest account of a Michigan high school playing the game of “foot ball.”

The following day’s paper provides only a few more details. The game was played on the Windsor Cricket Grounds. Despite the great disadvantage of playing under “American Football rules … quite different from the Canadian Rugby Union rules …” the “older and larger” Windsors won the contest, 12-6. Rosters for each squad were provided. 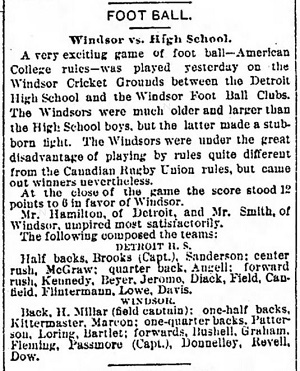 Under American rules of the time, a touchdown was worth four points, with a conversion kick following a touchdown worth two additional points. At the time, a field goal counted for five points and a safety was worth two. The teams, however, may have agreed to a different scoring system before the contest.

Was this the first football game for a Michigan high school? That’s unlikely, but it is certainly among the earliest published accounts involving a prep game in the state.

It’s a fair assumption that foot ball, or some version of the game, was being played in neighborhoods before that time, at least based on the following statement found in the Jackson Citizen Patriot, dated June 18, 1867.  Only days before, Dorrance & Goodwin’s, a store on Main Street in Jackson, had placed advertisements in the newspaper’s classifieds noting the pending arrival of this new product.

“Foot Ball – The pastime was inaugurated on our streets yesterday. Three or four balls were kept in motion all day on Main street alone. It affords no little amusement to the little boys, and is certainly a healthy exercise for the larger ones. It’s all right as long as no windows are broken or horses scared. Both calamities were barely escaped scores of times during the day.”

Rutgers and Princeton are credited with playing the first college football game in 1869. A decade later, in 1879, the University of Michigan established a football team.

Detroit High School played a number of games in 1888, besides the Windsor match, including a contest with the Tappen School from the Corktown area of Detroit. Played at the Detroit Athletic Club grounds on the afternoon of Thursday November 15, a final score was not mentioned in the following day’s Free Press.

For those unfamiliar with the sport, an account of the University of Michigan versus Detroit Athletic Club contest that appeared in the November 18 Free Press served as a fine introduction to the game, and the determination behind securing “possession of a leather-covered foot ball.”

“It was very interesting to see one speedy young man, after a desperate struggle in which the spectators fully expected to see him lose an arm or a leg, get away from his captors and start like a deer, with eight or ten of the opposite side in full pursuit. He is overtaken and the leader of the pursuing party springs upon the back of the man with the inflated trophy, bearing him to the ground with a dull thud … It is also an inspiring sight to see a fleet-footed player seize the ball and run at full speed in the direction of the goal of his opponents. Then a wing-footed opponent cuts across to intercept him, makes a flying leap, grasps the fugitive around the neck or waist and both go to grass with a suddenness and velocity that transforms them into human wheels … 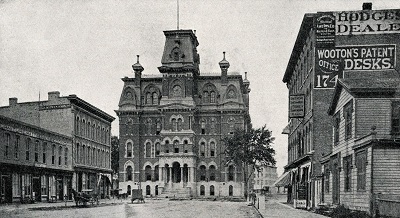 “While one unaccustomed to  foot ball will naturally be startled by some of the acrobatic feats, still it is impossible to watch the game for any length of time without a tingling of the blood and holding of the breath. It is most intensely exciting, continuous in action and replete with fine points of play.

“It may be explained that the goals in a foot ball game are set at a distance of 330 feet from each other. The goal is made by placing two pieces of scantling twenty feet long upright in the ground, eighteen and one-half feet apart. Another piece runs midway horizontally between the uprights, and the ball must go over the horizontal piece and between the uprights to count a goal. There are eleven men on each side and the object is, of course, to get the ball through the goal of the other. The time of game is an hour and a half each side playing forty-five minutes from each goal, with an intermission of ten minutes between halves.”

A player who ran over an opponent’s goal line, “with the ball and touched it down” was then entitled to “bring the ball in front of the goal and attempt to kick it through”…

Among those playing for the Athletic Club squad that day was “little Hugh Brooks (captain) of the high school team.” Eligibility rules for players would evolve over time.

On Saturday, November 24, Detroit High School squared off for the first of two contests with Ann Arbor High School, this one at the Detroit Athletic Club grounds. Admission to the 2:45 p.m. contests was 25 cents. A crowd of around 300 watched “an exciting illustration of how Rugby foot ball is played. The exhibition by the Ann Arbor boys was considerably better than that of the Detroiters,” noted the Free Press, “the result of that being that Detroit’s banners have been kicked into the dust.”

A second game with Ann Arbor was quickly scheduled.

In between, on Thursday, November 29, the Detroit High School squad played the Athletic Club before a crowd of about 200. 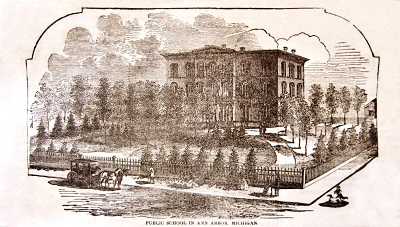 “While the Athletics won by 12 to 0, still their playing was very loose, probably the result of over confidence.   The Athletics will have to rid themselves of this by Saturday or the Albions will make short work of them.”

A large crowd gathered in the drizzling rain in Ann Arbor on Saturday, December 8, for what appears to be the final contest of the 1888 season for the high school teams of Detroit and Ann Arbor.

“It was a fine game. (Captain) Brooks, McGraw and Wisner, for Detroit, and Jewett, Diggert, Dupont, and Rathbone for Ann Arbor, made fine plays for their respective sides.” The result was an 8 to 2 win, and redemption, for the Detroit squad.

Today, 129 years later, “football” has seen wild expansion, numerous rule changes, and huge advancement in equipment worn when compared to those pioneer days of the sport. In 2017, more than 1 million individuals will suit up for high school teams across the United States. In Michigan alone, more than 36,000 participate in prep football.

And our state’s original programs live on. On Friday, Detroit Central opened its season with a win over Detroit Loyola. Ann Arbor High School, renamed Ann Arbor Pioneer in the late 1960s, fell in its Friday opener to Muskegon.

Welcome to another season of America’s favorite pastime.

PHOTOS: (Top) The Detroit Free Press included brief coverage of the first "reported" game on Oct. 28, 1888. (Middle) When Michigan’s state government moved from Detroit to Lansing in 1847, the old Capitol building was re-opened as the Detroit’s first city high school in 1863. To better accommodate Detroit’s growing population, the old two-story structure was remodeled into a four-story building, unrecognizable to most. The school served the city well until January 1893, when it burned to the ground. (Below) Erected in 1856 at the cost of $27,000, Ann Arbor High School at State and Huron (now site of the North Quad of the University of Michigan) was destroyed by fire in 1904. (Photos courtesy of Ron Pesch.)