MUSKEGON – A Reeths-Puffer running back tripped and plowed into the Kit Kat-shaped bags he was supposed to be hurdling Monday, and his teammates laughed. The offensive line coach wore a shirt, like line coaches always do, that read “No One Works Harder Than The Offensive Line.” The sun came out about halfway through, but the breeze kept the weather just right, and after a hands-in, all-together “R-P!” someone shouted, “I’ve missed that!”

The setting was as typical as could be for the first day of football practice at any high school across Michigan over the last many years … except for 2020.

Remember a year ago? When COVID-19 precautions meant little to no contact for the most contact-filled sport? When locker rooms were closed and footballs were wiped down after every snap? And the possibility of the season ending at any moment hung in the air?

“I was telling the team (last year) we could play our first game and the rest of the season could get canceled, so you don’t know,” Rockets senior lineman Marco Fields recalled. “The seniors only got to play half their season, and some got hurt.

“Now that we know we have a full senior season ahead of us, for us seniors, all we can do now is stay focused.” 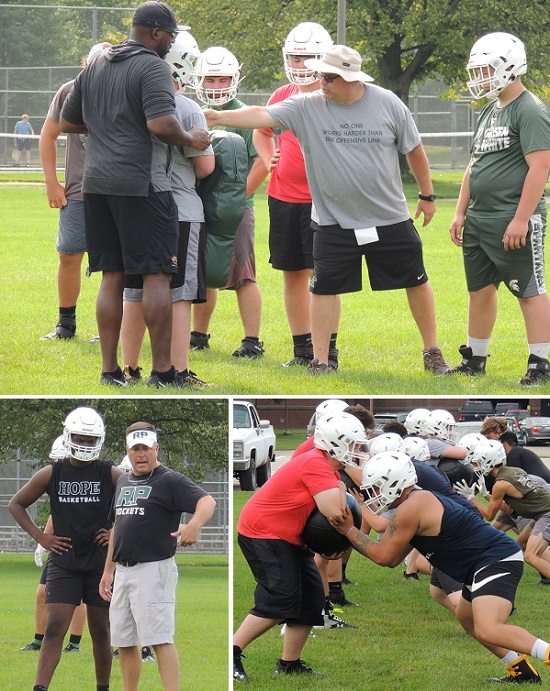 Indeed, although there’s little debate that COVID-19 is still lingering, just about everything Monday at Reeths-Puffer felt differently from the first day of football practice a year ago. And although varsity head coach Matt Bird thought he might have an answer to what remained the same from 2020 … he really didn’t.

“The same is … (searching for his thought)

“Actually, I don’t feel that anything is the same,” he admitted. “Other than we have a football, and we have some things involved from that standpoint.”

Monday marked a fresh start for high school football across Michigan, after last season included multiple COVID-related delays before finishing up in late January – which followed also an abbreviated regular season during which the conversation was forced at times into much more serious topics than the highlights on the field.

But every first day of practice means starting anew. And when it comes to fresh starts, Reeths-Puffer is a great place to begin Fall 2021.

Start with Bird, something of a master when it comes to building from a clean slate.

Way back in 2000, he was an offensive assistant when Grand Ledge won the Division 1 championship, the only Division 1 title that’s been won by a Lansing-area team. Six years later, he took over the Comets program and debuted with back-to-back 3-6 seasons (which predictably didn’t go over too well) before rattling off 10 winning seasons over the next 12 including a Semifinals trip in 2015. That eventually led to a rarely-seen career move after the 2018 season – leaving an established power for a new challenge, as Bird took the Reeths-Puffer job and took on a program that was coming off a second-straight 5-4 finish but accomplished with just under 30 players on the roster.

Bird led his first Rockets team to another 5-4 finish in 2019 … and then 2020 hit. Reeths-Puffer finished 2-5, but all things considered there were plenty of positives to take away.

When practice started, Bird was just finishing up recovery from COVID-19. And despite the unpredictability the season promised, the varsity still managed to grow to 53 players.

“As a coach you have to acknowledge it,” Bird said Monday, recalling 2020. “But the thing that is frustrating to me is you want to acknowledge it, but when you look at it everything was done so differently; it didn’t even feel like a season. At times you’d get started, then kicked back, then started and kicked back. We couldn’t do team dinners, we couldn’t do a lot of the bonding things we do as a group, and that hurt us.”

Monday was the beginning of another fresh start for the Rockets. Set aside that the great majority of COVID restrictions are off – the program is still emphasizing a number of hygiene and health-related concepts to help players avoid illness – and the football-related details provide plenty of excitement. 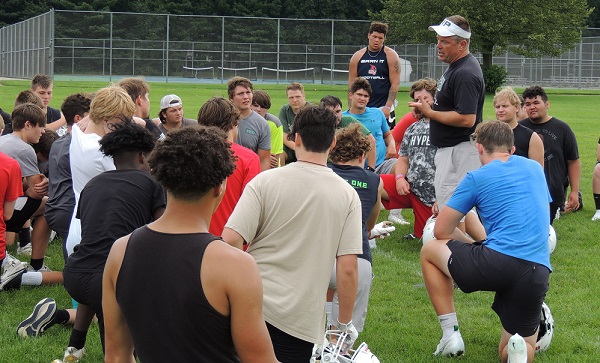 On one hand, Reeths-Puffer still plays in the Ottawa-Kent Conference Green – which includes the winningest program in MHSAA history in Muskegon High, back-to-back Division 2 champion Mona Shores and powerful neighbors Zeeland West and East. Grand Rapids Union, Holland and Wyoming all provide some intriguing possibilities as well heading into the new season.

But Bird’s varsity roster looks to push past 50 again, with 20 seniors including four returning senior starters on both sides of the ball. Fields is a Division I-caliber college line prospect, and the sophomore class is shaping up to be special with 6-foot-7 Travis Ambrose of particular note.

“I know every coach says their sport is the best team sport, but there’s something about football where you’ve got 11 guys out there and everybody can contribute,” Bird said. “The 6-5 kid to the 5-7 kid, and you can find a way to make that come together. I’ve always been a big fan, where it’s ‘Tell me that we can’t do something, and let me prove that (we can).’ … We compete using our strengths rather than focusing on some of the things that we don’t have.”

And there are lessons learned last season which, despite its wildness, should pay off. For example, last year teams were forced to focus more on technique with contact cut down substantially, and then rely on technology to cut down on face-to-face conversation. On Monday, Bird was recording his quarterbacks’ footwork with a tablet so he could share the video later over Google Meet, the new norm in communication but something Bird considers a valuable teaching tool brought on by the last 18 months.

The players, for their part, could allow themselves to feel a little lighter than a year ago. Fields and his teammates got to have more fun this time. And they were able talk about the expectations and aspirations that always make the first day a special one.

“I’ve heard people are expecting a normal Reeths-Puffer, and some say ‘Rocket failure again,’ which is just us going 2-5 or whatever they’re trying to say,” Fields said. “But I think we’re going to take this thing all the way.”

“This is normalcy, to an extent,” was Bird’s take on the day. “And it’s just really nice.”

PHOTOS: (Top) Reeths-Puffer running backs hurdle a series of bags during a busy first practice Monday. (Middle) Clockwise from top: Assistant coaches Jari Brown (left) and Jeff Uganski work with the linemen; senior Marco Fields (front, blue sleeveless shirt) is among those working on his form; varsity coach Matt Bird works with one of his quarterbacks and their receivers. (Below) Bird gathers with his team at the end of their first practice of the season. (Photos by Geoff Kimmerly.)