Twenty-five years ago, the story of Permian Panthers of Odessa, Texas, was famously told in the book Friday Night Lights written by H.G. Bissinger.

The author recently reunited with various team members as he recalled the book’s silver anniversary in an article for the August 3, 2015, issue of Sports Illustrated.

“It took me about 10 to 15 years of working in different groups, different places, different environments, to finally come to the conclusion that I’m not gonna have a group of coworkers and teammates like I had then,” said Jerrod McDougal, recalling his days playing high school football for the Panthers.

That same feeling is certainly shared by groups of former gridders around the state of Michigan.

A chance meeting led me to breakfast with one such group. The members of Grand Rapids Central's 1947 mythical football state champions gather at a Russ’ restaurant in Grand Rapids on a Monday each month.

Central was one of 17 football squads in the state spread across four classifications who could call themselves state champions after that season. Back in those days, the Michigan High School Athletic Association did not sponsor a football playoff, so any team with an unblemished win-loss record could lay claim to the crown. With eight wins and no losses or ties, The Hilltoppers, as they were then known, did exactly that. 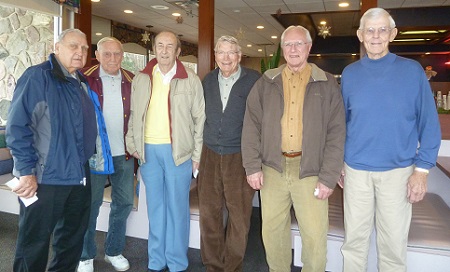 Nearly 70 years later, Don Hill can recall the circumstances of all 19 points allowed by the defense that season. The team remembered its coach, Chuck Irwin, who would go on to become Grand Valley State University’s first athletic director, and the days when summer conditioning wasn't 7 on 7 camps, but rather throwing a football around an empty lot, or a city park.

When I noted that Muskegon Heights’ Tigers also laid claim to the state crown that year, I was quickly reminded that both teams had defeated Holland High that season, but that Central had vanquished the Dutchmen 14-0, while the Tigers struggled to defeat Holland 14-12.

For the record, most newspaper writers gave the nod to both Flint Central and Muskegon Heights as the best in the state that season. Orville Peterson recalled that Flint Central had beaten an undefeated but once-tied Flint Northern team to end the year. That was indeed the case, as Coach Harold Auer's Indians downed coach Guy Houston's Vikings 20-6 on Thanksgiving Day at historic Atwood Stadium.

During the Grand Rapids Central gathering, a pair of restaurant patrons, who could overhear our conversation, wandered over to the table to congratulate the teammates on their accomplishment and to share a few memories of their own covering the value of prep sports in a proper education.

Similar gatherings are quite common across the state.

Each fall, the “Leather Helmets Club,” comprised of football players from Muskegon High School gather for a catered dinner at a rental hall on the shores of Muskegon Lake.

“The 1950 season was the first year that the Big Reds moved from leather helmets to plastic,” recalled Bob Ludwig, now 87 yards old and a member of the 1944 mythical state champions. “We started the Leather Helmet about 25 years ago with 65 guys.”

Ray Carlson, who served as starting quarterback for Muskegon’s mythical state champions back in 1940, still can recall the season.

“It was the year the district installed lights at Hackley Stadium,” said Carlson. “That’s when most of the games were moved from Saturday afternoon to Friday night.”

For many years, the event was a perch fry, but as time marched steadily on, the task became too challenging for this collection of gridiron greats from Big Reds teams, as membership in the club has shrunk to 25. The group will again gather in the fall, and debate inviting members from the 1950s to the gathering to expand membership.

Sometimes, such reunions are single one-time events. In 1993, Ann Arbor High School’s team from 50 years back collected to celebrate its 1943 mythical state crown. In 2013, the 1973 Saginaw Arthur Hill team, undefeated and unscored upon over the season, gathered.

“We had a pretty good group of kids,” said Brady recalling the days. “Frank Brogger was our coach, and he made sure we took on a good schedule. We played schools in Flint, Detroit, Saginaw, Bay City and Jackson. We played Sunday evenings at our own field. They really took care of that field. During the week, we practiced in the cinders behind the field. On Saturdays we would go through things on the field in our socks.”

Induction into the Saginaw County Hall of Fame in 2005 led to regular gatherings by team members. A group of seven and another former player from Saginaw St. Peter and Paul meets for coffee at an area McDonald’s at least twice a week.

“He was a rival back then, but we’re friends now,” added Brady, laughing.  “We’ve lost a lot of the guys; we’re all in our 80s now. Still, it’s a lot of fun to get together and talk about old times and new times.”

“Whether you play in front of a crowd of 900 or 19,000, the experience of high school football is unlike any other,” noted Bissinger in Sports Illustrated, recalling something shared across state lines and across generations.

The beauty of high school competition is found in the friendships made that last a lifetime.

PHOTOS: (Top) A report from Pesch's wealth of documents shows most of the undefeated football teams at the end of the 1947 season. (Middle) The Grand Rapids Central group stands together after a gathering last December, from left: Tony Krenselewski, Orville Peterson, Don Hill, Bud Hall, Herb Carpenter, Gordon Osmun and Floyd Hall.