Terrieon Robertson had a choice to make this spring. The Burton Atherton senior could leave his school for an opportunity to play football elsewhere, or he could stay and risk the chance that Atherton’s low numbers would lead to a cancellation of his final season.

After meeting with new Atherton coach Randy Young, that decision was easy.

“I was planning on leaving toward the end of my junior year, because I didn’t know if football was going to be a thing,” said Robertson, who noted that he didn’t want to leave. “In my head I was like, ‘We’re not going to have enough kids.’ I was working out and getting better, and I planned on transferring. (Young) came in and he graduated from Atherton, he was like ‘Everything is going to be different and better, just trust me.’ I did, and I wouldn’t change a thing.”

Robertson was one of just four players who planned to play football when Young took over the program in June. That number doubled through the summer, and eventually the Wolverines were able to get to 11 players for their first game of the season against Kinde North Huron.

Now, after a 2-1 start, the locker room is overflowing.

“We’re actually out of helmets and uniforms for the kids,” Young said. “I can’t sustain any more new kids.”

“I’ve forever followed Atherton," Young said. "Since I graduated, I’ve always kept up with them. It was disheartening to see my school falling by the wayside. My senior year, we were 2-7 and we lost our JV program. It kind of fell down from there.” 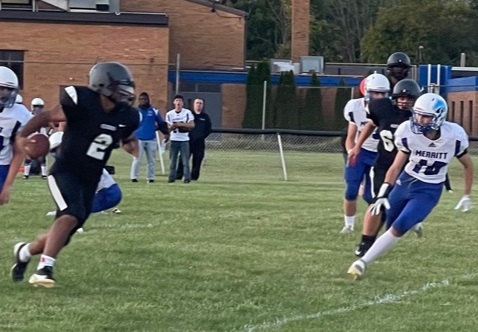 Despite that, Young jumped at the chance to take a job at his alma mater.

“The chance to go back to your high school and possibly change it around – I'm blessed to be back there,” he said. “It felt like with me and my staff, we were up for the task. I’ve worked with most everybody on my staff before. We mesh well. Even through the summer, ever since I left Bentley (as an assistant), we’ve been working toward something like this. We were confident in the work we were going to put in.”

Young’s excitement did not reflect the situation he was entering. As wins dried up and numbers dropped, Atherton moved to 8-player football in 2019, despite having more than 215 students enrolled and hence not being eligible for the postseason. (Only schools with 215 or fewer can qualify for the 8-player playoffs, and Atherton’s count is 254.) That year, the Wolverines were 1-8, and in 2020, they started 0-2 before forfeiting their final two games and ending the season early.

“Oh my goodness, the image has been terrible,” senior Tra’Jen Adams said. “I had a terrible image of it before I even went there. When people play Atherton, they knew it was going to be an easy win. Even before this season, there were so many jokes around Flint. Now, it’s quieted down a little bit, but it’s still there.”

Before changing minds in the area, Young and his players had to change minds in the school. That included Adams, a basketball player the Atherton staff recruited out of their own gym. Like many of the athletes in the school, Adams was also contacted by Robertson, who himself had turned into a recruiter.

“Every single kid that I knew wanted to play or looked like they could play, I contacted them,” Robertson said. “Probably 80 percent of kids on the team right now got a text from me to come out for the team. Some people were like, ‘OK, we’re on the way.’ Most kids didn’t even know football was happening. Some kids were still against Atherton saying that Atherton isn’t good and we shouldn’t play. Once we won the first game, more kids came out. We won the second game, and more kids came out.”

The Wolverines lost their opener against North Huron but impressed their coach and opened some eyes by playing tough against the returning Division 2 semifinalist in the 30-20 defeat.

Atherton has rolled in its past two games, defeating International Academy of Flint 44-18 and New Haven Merritt Academy 49-14. As the team racks up wins, the players are putting up huge numbers. 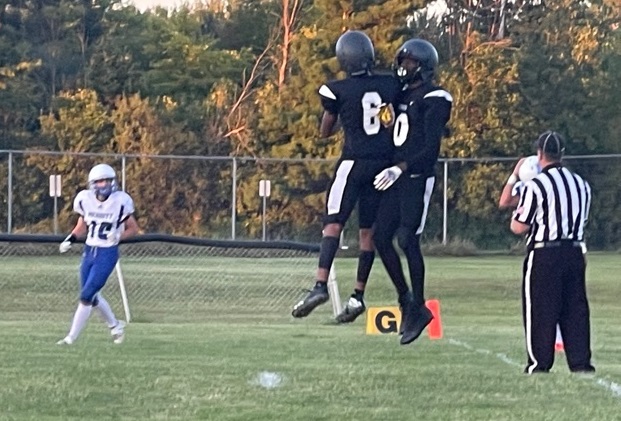 Junior receiver and running back Romiel Clausell is averaging 16.8 yards per touch (386 yards on the ground, 134 receiving) and has seven touchdowns. Robertson has hauled in 12 catches for 143 yards and three touchdowns, and sophomore quarterback Demontrey Davis is 18 of 27 passing for 297 yards and six touchdowns, and has rushed for 215 yards and four scores.

Defensively, the Wolverines are causing plenty of havoc, led by Adams’ seven tackles for loss and four sacks. Clausell (six TFL) and Te’Shawn Stevenson (five TFL) have chipped in as well.

“Every day (they surprise me),” Young said. “Not because they’re not talented, but they’ve grown up. They’ve grown up so much before our eyes. It’s almost like having a child and having them outdo what your expectations for them are. I’m surprised, and every day there’s something new that brings a smile to my face.”

They’re also surprising their classmates and creating an excitement around the program that hasn’t been present for a long time.

“People were really doubting us at first all over social media,” Clausell said. “After our first three games, I haven’t heard anybody talk since. We love to see it, and we hope we can continue it.”

With no postseason available to them, the Wolverines have different goals than most. They play in the North Central Thumb League Stars division, so a league title is a possibility. Of course, to do that, they would need to overcome 8-player powerhouses Morrice and Deckerville, who have each won a Finals title.

But games against that type of competition do give Atherton a chance to prove how far they’ve come.

“We have a lot to prove,” Young said. “We want to prove that we’re worthy of being in a playoff situation. We want to show everybody that we’re not the Atherton you think we are. We’re going to play with something to prove.”

A longterm goal is to get the program back into 11-player football and postseason eligible. Young said that’s probably a couple years away, but with the early success and growth in participation among his underclassmen, that feels attainable.

While Robertson and his classmates won’t be around to experience that, they’ll certainly be remembered as the ones who made it happen.