Angers, who was still fielding calls and texts late into the night Saturday, was “touched” by the show of support for his Glen Lake program.

Most of all, he was proud of his players, who kept improving every week to make this moment possible.

“They have worked hard for this opportunity,” he said. “I told them (after Saturday’s game), ‘You’re going to Ford Field. You’re one of 16 teams still playing. A lot of people will be watching, but I want you to enjoy it.’

“It’s like the Alan Jackson song ‘Remember When.’ I said in 20 years when you come back to see me I want you to say, ‘Remember when.’”

Glen Lake, which faces Jackson Lumen Christi for the title Friday, won the Class DD championship in 1994 under coach Bill Hollenbeck. The Lakers lost in the Class DD Final in 1996. Now, 20 years later, Glen Lake’s back.

“It’s an incredible feeling,” all-state linebacker Duke Angers, the coach’s son, said a few hours after the game. “It seems surreal right now. Growing up as a kid, you dream about playing at Ford Field. Now we get that opportunity. We’ll enjoy this for 24 hours and then get to work for Jackson Lumen Christi.”

Junior quarterback Cade Peterson, who rushed for 179 yards and three touchdowns in the win over Pine River, is also a coach’s son. His father, Tim, was head coach at Lake City for 15 seasons. The family moved into the Glen Lake school system this year. Tim is the quarterbacks coach for the Lakers.

“I’ve been going down to the state finals since I was 12,” Cade said. “And I would always think, ‘I want to play in this (state finals).’ Now it’s happening. You can ask any team in the state, and their ultimate goal would be to go to Ford Field and play for a state title. Only a few teams can say they accomplished that – and we did. As soon as that moment set in (Saturday), it was ‘Hey, we achieved our goal. Now let’s go win a state championship.’”

For Tim Peterson, who led Lake City to nine playoff berths, including Regional appearances in 2012 and 2013, it was a moment to savor.

“You work your whole life as a coach to try to get to the apex – and this is it,” he said. “We’re there. I couldn’t be happier for the kids, the program and the community.”

Now the task for the 11-2 Lakers is to a win a 12th game. Glen Lake will be taking on a program steeped in tradition. This will be Lumen Christi’s eighth MHSAA Finals appearance since 2000. The Titans have won five crowns during that span under coach Herb Brogan.

“Our kids have been facing challenges all year, and people keep underestimating them,” Tim Peterson said. “They just keep doing what they do – and they do it very well.”

Glen Lake’s losses were to Traverse City St. Francis (21-13) and Frankfort (26-21), teams that finished 11-1.  The Lakers came in second to Frankfort in the Northern Michigan Football League’s Leaders division. Jerry Angers, now in his eighth season at the helm, said his team learned valuable lessons from those defeats.

“Sometimes losses are good for you,” he said. “We, as coaches and fans, never want to believe that, but in our two losses we had 15 or so penalties in one and five turnovers in the other. So you go back and you work on it. You try to reduce the penalties, reduce the turnovers. That became a great focus for our kids. I think we’ve had eight penalties in four playoff games – total. And we’ve kept our turnovers to a minimum. If you focus on the task at hand, and what’s in front of you, those things are going to be eliminated.”

Cade Peterson said the setbacks brought the team closer together, too.

“People can start pointing fingers (in defeat),” he said. “That didn’t go on here. Everybody picked each other up and kept fighting, kept going.” 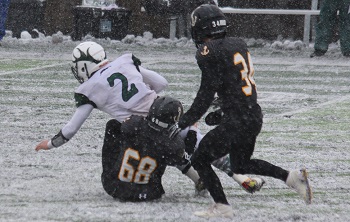 The 16 seniors on the team led the way.

“They set the tone,” Tim Peterson said. “The senior leadership has been phenomenal in keeping the focus.”

Glen Lake had to go on the road at Roscommon and Calumet to win two of its four playoff games. On Saturday, the Lakers, who were averaging 160 yards passing and 215 yards rushing per contest out of their spread offense, stuck to the ground to beat Pine River in blustery conditions that forced officials to clear snow off the artificial turf before and during the game.

“The weather forced us to be very one-dimensional (Saturday), but we’re real pleased with our ability to run the football as well as throw it,” Tim Peterson said. “That’s a good combination to have when you go deep into the playoffs because you never know what the weather will be.”

Defensively, Duke Angers, a four-year starter, is averaging 10 stops a game and Tony Duperon seven. Glen Lake is surrendering less than 200 yards in offense per game. Angers was the Traverse City Record-Eagle’s Defensive Player of the Year a year ago.

“As a football coach, he’s one of the best leaders and overall players that I’ve ever been associated with,” Jerry Angers said.

Glen Lake qualified for the playoffs a year ago, finishing 5-5. This season, with a number of experienced players returning, coupled with the addition of Cade and Drew Peterson, the team has flourished. Drew is a sophomore defensive end and receiver. He had an interception Saturday.

Cade Peterson was a two-year starter at Lake City, throwing for 1,753 yards and 19 touchdowns as a sophomore.

“I feel a big part of why I’ve been successful (at Glen Lake) is because of how welcoming everybody was – not only the team and coaches, but the school and community,” he said.

“When those two (Peterson) boys walked in, our kids just grabbed them and said, ‘Hey, let’s go. You’re part of us now,’” Jerry Angers added.

Tim Peterson retired as a principal in June of 2015. He coached the Trojans that fall, but after the school year the family decided to make a move. Peterson was familiar with the Glen Lake area, since he worked camps with Hollenbeck. He was also good friends with Angers.

“It was time for a change,” Peterson explained. “We came up and looked at the academic piece of it, which is most important to us, and we said this is where we want to go.

“We’ve always said, at some point, we’d like to get here. This community is so supportive of their kids and of their school and that’s what you look for as a parent.”

Now the Lakers are one win away from a second MHSAA title. Regardless of what happens, though, Duke Angers said he believes his senior class has made an impact.

“We raised the bar a little,” he said. “We wanted to leave a trail to follow – and I think we have.”