With just a cursory glance at the 2020 results for the White Pigeon varsity football team, the Chiefs’ 4-3 record might not seem all that impressive.

Their opponents this year, however, know not to discount a program that has the potential to both reshape the Southwest 10 Conference standings by the end of the fall, but also to shake things up once the Michigan High School Athletic Association Division 8 playoffs get rolling.

Losing two of those contests to eventual D8 champion Centreville — a 14-8 defeat in Week 2 and a 16-0 loss in the District championship game — White Pigeon’s only other misstep was a 26-24 loss to Mendon in what was the Hornets’ final season before moving to the 8-player ranks. White Pigeon’s District opener win over Saugatuck was the school’s first postseason victory since 2009.

The Chiefs are rolling so far this year with sizable wins over Saugatuck (48-6) and Galesburg-Augusta (38-7) to set up a conference opener this Friday against Decatur (1-1). Comstock is White Pigeon’s Week 4 opponent before the anticipated matchup with Centreville on Sept. 24.

"It definitely was a misleading (record) last year,” fourth-year head coach Shawn Strawser said. “(Centreville) was just a little better than us and ended up being state champs. Knowing that we were right there and that’s how close we could have been to having a nice run and being one of the better teams in the state … we watched those teams play and there wasn’t anybody that scared us. We would have loved to have chances against some of those schools last year. 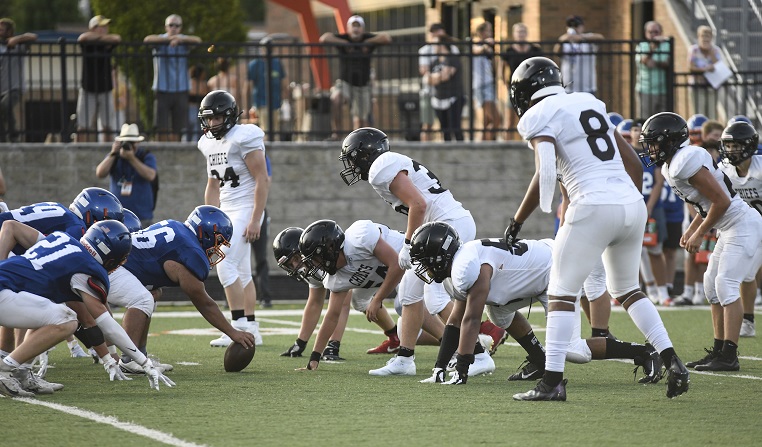 "I think our guys seeing a team from our conference won a state title, it gives them some confidence that they can do that too if they work hard.”

Perhaps that wish will come true this year as Strawser’s Wing-T offense is pounding opposing defenses thus far despite the graduation of 12 seniors, only 17 players on the varsity roster and several underclassmen in starting roles. If so, it will be because of heart and not size.

At a preseason scrimmage, Strawser instituted a new rule as a result.

"The boys come walking down the sideline and they don’t have their pads on,” he said. “I said, ‘Dang it; what are you guys doing? Don’t you ever walk out here with your pads off. We ain’t intimidating nobody with our pads off, so go get them back on. Some people might see us with our pads off and they think we’re a JV team. But I’ll tell you what, we don’t play like a JV team.”

Seniors Jack Davidson and Dylan Carper so far have amassed staggering rushing production for the Chiefs, who have thrown the ball just three times. Davidson, a 5-foot-10, 170-pound fullback, ran for 299 yards and three touchdowns against Saugatuck and he added 137 yards and three more TDs vs. the Rams in Week 2. Carper, a 5-9, 165-pound back, piled up 130 yards and two scores in Week 1 and added 99 yards and a pair of touchdowns last week. The two also line up at linebacker — a position of strength for the White Pigeon defense

"Carper is a football player,” Strawser said. “You can play him anywhere. He’s the hardest hitter on the team. He could have had 300 yards the first night had I been giving him the ball more. Jack Davidson is not the type of fullback we had the first couple years. He sees holes really well and is a really strong runner.” 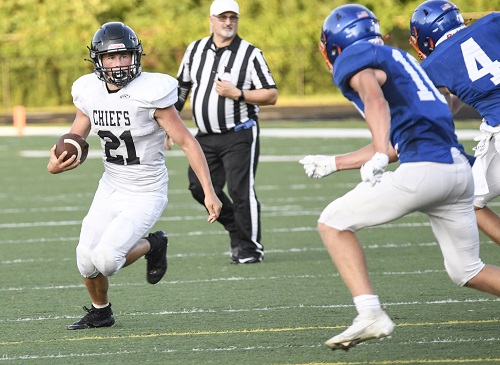 "Our line has probably been the best it has been in a few years, so that’s a big reason why we get so many yards per carry and so many touchdowns,” Carper said. “Them doing their job consistently helps us a lot. It makes it really easy for us to just run through the big hole they made.

"It’s really fun watching Jack go for all these yards. And then the next thing you know, I get to carry and go for a big touchdown. We just get to go back and forth with each other. It’s fun to play and fun to watch. I’m faster than Jack, so I hit the hole quicker. But he’s more powerful and patient than I am. He waits for the hole to develop while I go right through it.”

Davidson has a unique perspective on how the front seven should operate having spent last season at left guard to shore up the offensive line.

"Yeah, I got yelled at a few times,” Davidson joked. “It made me understand how tough it is. I get now why they ask a lot of questions and that I have to be more patient in the backfield.”

"We knew it was going to be a one-year deal,” Strawser added of Davidson’s line days. “We were a little thin on the line last year and he stepped up and did a nice job. But we knew he’d be moving back this year.”

With the meat of the schedule ahead, the Chiefs believe they have what it takes to get to the next level.

"I just think we work really good as a team. And with us all working together, I think we can cause them some trouble,” Carper said. “Every year I think we’re in the mix for (a conference championship), but this year there is a good team at Centreville and at Comstock, so it should be a close race.”