He discovered he’s even greater on the gridiron.

The junior wide receiver didn’t intend to play high school football at Grand Rapids Christian, but now figures that’s his meal ticket in college — and perhaps beyond — after a record-breaking season that culminated with an epic performance in the MHSAA Division 3 championship game against Orchard Lake St. Mary’s.

Harris made three clutch catches in the final eight minutes to keep scoring drives alive and finished with a MHSAA Finals record of 243 yards on eight catches in the Eagles’ 40-37 overtime victory Saturday night at Ford Field.

After the Eagles stopped St. Mary’s on fourth-and-three on the first series of overtime, Schipper came out on first down and kicked the championship-clinching 27-yard field goal.

In the process, Harris became only the 12th player nationally and first from Michigan to rack up 2,000 receiving yards for one season. He finished the season with 2,016.

“It’s a great achievement for me,” Harris said. “I have to thank the quarterback, the line and my coaching staff for putting me in the right position to make plays. All I care about is that state championship.”

It's the first for Grand Rapids Christian, which also made its first MHSAA Final appearance and finished this fall 13-1. St. Mary's, last season's Division 3 champion, ended 11-3.

Harris had hoop dreams coming into high school, figuring he would specialize in basketball to enhance his college opportunities. After getting talked into playing football by Eagles coach Don Fellows, Harris discovered a hidden talent. He wound up making a verbal commitment last summer to Michigan State to play both sports, but football may eventually win out.

“I never realized the talent I had for football,” the 6-foot-4, 180-pound Harris said. “I’m putting it all together. I’m going to keep working hard to achieve my goals.

“(MSU basketball coach Tom Izzo) loves players that play football. He told me that. He encouraged me. He’s with me with the whole situation and loves that I play football. I’m kind of starting to lean more towards football. I just feel like I’m probably better in football and that I can go further in football.” 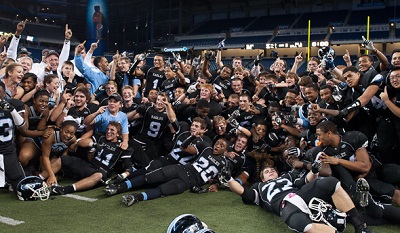 Grand Rapids Christian quarterback Alex VanDeVusse was 16 for 26 for 307 yards and a touchdown, but deflected any credit for his performance to his outstanding wide receiver. VanDeVusse noted that a couple of Harris’ catches late in the game came on passes that would’ve eluded the grasp of most high school receivers.

“He makes me look really, really good,” VanDeVusse said. “Balls that are behind him, he slows down and catches it with one hand if he has to. Balls that are too high, he jumps and gets flipped. People don’t necessarily think he’s tough or something, but to have a guy go three or four feet in the air to get flipped, catch the ball and land on his back and his head, he’s pretty tough in my book. I’ll take him on my team every single day. He’s amazing.”

VanDeVusse looked to Harris in every clutch situation, of which there were several in a wild fourth quarter.

“We joke around that he’s our toy,” VanDeVusse said. “If you have a toy, you’re going to want to play with it all the time. We use him a lot and he does every bit that we ask of him.”

The Eaglets knew that Harris would be targeted when Grand Rapids Christian needed a big play, but even double coverage couldn’t stop him.

“He makes you shift,” St. Mary’s coach George Porritt said. “You have to bring more people to him. You can’t guard him with one. It might leave somebody else open. He forces you to bring two, maybe three.”

A 42-yard run by VanDeVusse gave Grand Rapids Christian a 20-7 lead with 4:42 left in the first half, but St. Mary’s rallied behind a ground game that rolled up 459 yards to take its first lead at 30-27 with 9:37 left in the fourth quarter.

Harris made four catches for 47 yards on the ensuing drive, which culminated in Schipper’s game-tying field goal.

St. Mary’s got the ball first in overtime. A pass by Matt Linehan intended for running back Parker McInnis in the end zone fell incomplete on fourth-and-three.

Grand Rapids Christian didn’t hesitate to bring in Schipper to end the game with his right foot on first down.

“I knew it was a big kick starting off, but I just tried to block it all out,” Schipper said. “It felt just like at practice. Coach puts a lot of pressure on us during the week so these situations don’t come as big in the games. That really helped me. I’m just glad I could get the win for the team tonight.

“He’s got the whole team screaming in my ear in practice when I’m trying to make field goals. That really helps in this environment.”

St. Mary’s lost, despite setting a finals record with 579 yards of total offense. The teams combined for a record 1,033 yards.

Click for full statistics and to watch a replay of the game.