If you got the impression that John Dukes has been around Howell football forever, you wouldn’t be far off.

His association with the program began before high school.

“When I was a kid, I used to live near Page Field (Howell’s former athletic complex), and I would go out and watch football practice,” Dukes said. “I was at practice all the time, and the coach said, ‘If you’re going to be here all the time, you may as well get some water for the boys while they’re practicing.’”

A little more than 55 years later, Dukes will be honored tonight when the field at Howell’s Memorial Stadium will be named John Dukes Field.

Howell football coach Aaron Metz began the drive to name the field after Dukes when it was determined the old turf, installed in 2004, needed to be replaced.

“We have a commitment award named for John,” he said. “If you play football for four years, you get the John Dukes Commitment Award. We put a committee together with people who have been around Howell for a long time, and when you ask anybody, they say there’s not a person more deserving than John Dukes.

“So I ran it up the ladder to the athletic director and superintendent, and, to be honest, it was a pretty easy process because no one could find anything bad about John,” Metz added. “We’re excited to have the opportunity to do it.”

Dukes was a three-year varsity player at Howell and then played at Alma College, where his teams won three league championships.

With the exception of six years at Hartland coaching under his son, Marcus, John Dukes has been affiliated with Howell football for 46 years, including 25 as the head coach.

After graduating from Alma in 1972, Dukes got a teaching job at Howell and was an assistant freshman coach for a season and a varsity assistant for two before taking over as head coach at age 25.

“My philosophy at the time was I wanted to help the kids enjoy playing football and help them to be successful at it,” he recalled. “The previous three years our record wasn’t very good. That was one of my objectives, was to make it fun.”

He then talked about his first season with a little self-deprecation, a common thread in most conversations with Dukes.

“I remember my first game,” he said. “Because I played defense in college (Dukes was a linebacker), I thought we were going to be a really good defensive team. We played Fenton in my first game, and we lost 32-19, so my defensive prowess wasn’t good at the time.”

The Highlanders lost six of their first seven games that season, but won the last two and went 8-1 three seasons later.

In all, Howell had winning records in 15 of his 25 seasons, but one group of players stood out for an entirely different reason.

“We had a period of time (1989 and 1990) where we weren’t very good, and we lost 17 games in a row,” he said. “But those kids were wonderful kids to coach. They came to practice with energy all the time, and from a coaching standpoint, it was wonderful to coach them during the week. Now, Fridays were a different story, because we didn’t play very well on Fridays, ever. 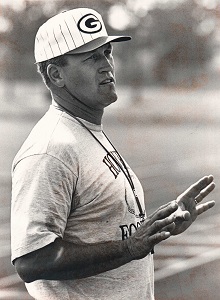 “But the real thing that stands out with that group was the very last game of their senior year we beat (Waterford Kettering), and you’d have thought we’d won the Super Bowl,” Dukes continued. “Those kids who were seniors, that was their first football victory in high school. It was an amazing time. We had several teams with good players, and I really enjoyed coaching them, too, and I don’t want to leave them out. But that really stood out in my mind, in that they came out to work every day.

“Over a period of time of losing that many games, sometimes, it’s not fun and it’s not fun for them or the coaches. But we had a very enjoyable time over that two-year period, regardless of the fact we didn’t win any games.”

His perspective is consistent with the principles by which he ran his program.

“These weren’t original to me,” he says, “but the three things I always told our kids was your faith should be your number one priority, your family should be your number two priority. Football, when school hadn’t started, should be number three. And when school started, school became three and football became number four. We tried to base everything we did on these priorities in our lives. Sometimes those things cross over and mix and match. When they do, then you have to step back and say what is really important here?”

Dukes resigned after the 1999 season.

“There were a lot of things and I don’t know if anything in particular,” he said of his decision. “I had been doing it for 25 years, and we had a string of years where we were 6-3. So we were OK, but I felt it was time to be done with it.”

His self-imposed exile lasted one season. He had a couple of stints as an assistant coach when he finally decided to retire for good in 2006.

“No sooner had I done that, my son (Marcus) called me up and said he just got the Hartland job,” Dukes recalled. “He said, ‘Dad, you have to come here and help.’ So I went there for six years. Then he resigned, and I thought I was going to be done again.”

After another stint as a Howell assistant, John Dukes took the last two years off before agreeing to rejoin the program as a junior varsity assistant this season, as the offensive coordinator.

As it turns out, one grandson, Jackson Dukes, plays on the Howell JV, and John Dukes also is helping coach another grandson, Colin Lassey, on his junior football team.

“When Jackson gets home, I ask him, ‘Did you get yelled at by Grandpa today?” Josh Dukes says. “And when he says yes, I say, ‘Good. You should be getting yelled at.’ So nothing has changed in the 30 years since high school.”

“There was never an expectation that we had to be this or that,” Josh Dukes said of himself, his brother and sister, Carrie. “Now maybe he was a little harder on me, but that’s something we were thankful for. I’d rather him be harder on me than any kid on the field, because then the other kids left me alone. They knew it was the same for everyone across the board. He wasn’t going to take it easy on me, my brother or my sister.”

“The first time he coached me, he came home to my mom and said, ‘I don’t know how people do this,’” she recalled. “‘They’re all crying, half of them don’t think I like them. I don’t know how to do this with girls. It’s a totally different ballgame.’ But he was a great coach. I know some people don’t like their parents coaching them, but I loved having him coach.”

Like her brothers, Carrie Lassey stayed involved with sports. She is now the athletic director at St. Joseph Catholic School in Howell.

“He coached my freshman team a couple of years ago,” she said. “It was third and fourth-grade girls. It’s amazing. He can coach pretty much anybody.”

Indeed, Dukes also coached baseball and wrestling at the varsity level at Howell, and, for a couple of weeks, filled in as a competitive cheer coach when the Highlanders had a temporary vacancy.

“I was more a supervisor,” he said, but serving that role illustrated his commitment to the athletic program as a whole. He was needed, and he stepped in. 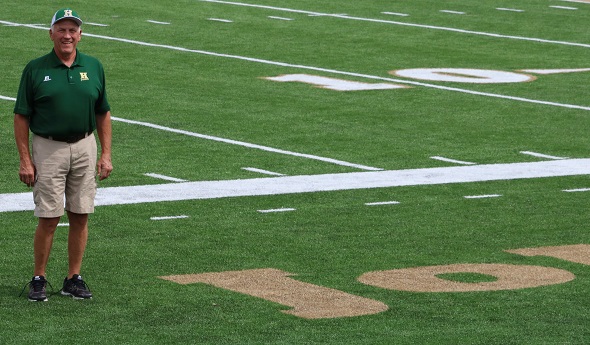 Having stopped and started his career so many times, Dukes, now 68, laughs when asked about what he will do when he retires in the distant future.

“I’m sure he’ll be coaching when he’s in his 90s. Maybe triple digits,” jokes Bill Murray, the former Brighton coach who matched up with Dukes’ teams during the second half of Dukes’ Howell tenure. “The guy loves the game, he’s out there and he has a lot to offer. His teams were always well-prepared, they played great defense, were fundamentally sound and when you went nose-to-nose, they were consistent as to what they were going to do. It was a matter of whether you could stop them or not.”

Dukes still keeps up with the Howell varsity, still offers advice when asked, and still enjoys the competition.

“For me, as a head coach, it’s great having a coach (on staff) who has been there and done it to talk to and mentor, even me,” Metz said. “What makes a successful coach, I don’t think, changes, whether it’s been 50 or 100 years ago to the current day. He steered the ship to have an outstanding record (130-95) and also have a huge impact on kids in our community.”

“When people talk to me about my dad, they say he was a dad to them, or like a second dad,” Josh Dukes added. “Or, ‘I wanted to be a teacher because of him.’ These are the things that for us,” referring to his siblings, “is the most impressive part. The kids of players he’s coached, or the grandkids.”

Dukes has the unusual distinction of having coached more congressmen (Mike Rogers and Mark Schauer, who started on the offensive line for Dukes in the late 1970s) than pro football players (Jon Mack, who played for the Michigan Panthers of the USFL in 1984).

John Dukes will give a short speech before tonight’s ceremony, which will take place before Howell’s home opener against Plymouth.

“They’ve given me five minutes, but it will probably be shorter because they want to get the game started on time,” he joked.

“It’s an incredible honor,” Josh Dukes said. “Everyone in our family feels the same way. I don’t think he ever went into this with any intentions of being singled out. It’s a great lesson for our community and our athletes, to see what hard work and effort and care for your community can do, you know?”

During the ceremony, the letters “John Dukes Field,” which were sewn into the artificial turf in Howell’s Vegas Gold, will be unveiled.

“Aaron showed it to me last week when they were putting it in,” John Dukes said, then joked, “I thought (the lettering) was going to be a little trademark sign (sized), and my goodness, it’s bigger than the numbers. It’s a little bit ostentatious for me, I think; wow, that’s quite a tribute. I’m very humbled by it and honored by it and very appreciative of what people have done to make this happen.”

A few days later, Dukes posed for a picture next to his name on the field and chatted with a reporter as they left the stadium.

Then, he turned a corner to the JV football office and kept walking.

Before he became a living legend, John Dukes was a football coach, and there’s a game coming up and his team to prepare.

PHOTOS: (Top) Howell coach John Dukes celebrates his team’s 38-0 playoff victory over Wayne Memorial in 1992. (Middle) Dukes, during the 1991 season. (Below) Dukes stands next to the lettering that will be unveiled Thursday when the school’s field is named in his honor. (Photos taken or collected by Tim Robinson.)