DEARBORN – Often, a child of a successful athlete has difficulty living up to that standard.

To this point, that’s not the case with Aidan Hutchinson.

He plays a similar position as did his father Chris, an All-America defensive lineman at University of Michigan in 1992. But there are differences as well between father and son – although like his dad, Aidan also will head to Ann Arbor after he graduates from Dearborn Divine Child.

All Falcons fourth-year coach John Filiatraut knows is that he hit the lottery when the Hutchinsons decided Aidan would attend Divine Child – not that he didn’t see it coming, given Aidan’s mother, Melissa Hutchinson, and his two older sisters, Mia and Aria, all attended the Catholic school.

“They’re great people,” said Filiatraut, a 1986 Divine Child graduate. “It’s a treat. Coaches can complain and whine with the best of them. But we’re lucky to have Aidan.

“And Chris is not very intrusive. I was worried about that at the beginning. With his background, it would be easy to step in. We as coaches are trying to do things right here. (Chris) is committed to Aidan and for him to do this on his own, and not cast a shadow on Aidan.”

As for those differences between father and son, size is one. The elder Hutchinson was 6-foot-2 and weighed 221 pounds when he graduated from high school. His playing weight at U-M was 250. His son is 6-6 and weighs 255 pounds, and is considered one of the top prospects in the class of 2018. Aidan plays defensive end and tight end. His father was a defensive tackle.

Chris Hutchinson grew up in Houston and played football at Cypress Creek High before going on to University of Michigan, where he played four seasons and was named first team All-America as a senior defensive lineman in 1992. Chris Hutchinson said private school education was all new to him, but he couldn’t be more pleased with the educational – and now with his son – athletic experiences his family has enjoyed.

Not surprisingly, Aidan has accepted a scholarship offer to attend U-M. He did make unofficial visits to Notre Dame and Wisconsin, in addition to his interest in attending Penn State, but eventually U-M won out. 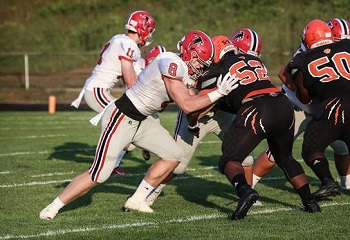 And so far his senior season has unfolded as planned.

Chris Hutchinson didn’t allow Aidan to play tackle football until he was in the seventh grade. Aidan did play flag football, and other sports like soccer, but his father held him out of the physical contact until he thought Aidan was ready.

“It was a big change for me,” Aidan said of playing tackle football. “I had to learn a lot because most of the other kids had been playing two or three years. It wasn’t too bad a transition. I just had to learn quickly.”

Despite his size, and his weight as an infant (11 pounds, one ounce), Aidan wasn’t a large child growing up. He weighed 135 pounds when he was in the eighth grade, then 160 as a freshman playing on the line on Divine Child’s junior varsity team. Over the next two years, he grew seven inches and added 70 pounds.

Though his size is a plus once he gets to college, there are times when it can work against him at the high school level.

“It’s different when you’re 6-6 going against a 6-foot kid,” Chris Hutchinson said. “You have to keep your head down, and stay low.”

Chris Hutchinson, who’s a doctor in the emergency room at Beaumont Hospital in Royal Oak, understands it’s not his place to coach his son from the sideline, even though, as the team physician, it’s his job to be on the sideline. He keeps a safe distance and allows Filiatraut and his staff do their jobs.

At home, it’s a different story. The two view film constantly to determine where improvements can be made.

“Thank God for Hudl,” Chris said. “I only focus on technique. When Aidan tells me they’re using a double team, I ask what type? There are different ways you can use a double team. 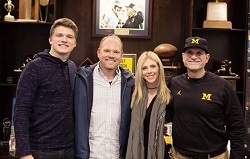 “It’s important not to be that dad who coaches. There are way too many dads who do the coaching thing. The hardest thing for me is not to say something, and have him come to me. When they do ask, then you can go forward.”

Aidan is quick for his size, and he attributes much of that quickness and his ability to react quickly to the other sport he plays, lacrosse. He started playing lacrosse the same year he began playing tackle football, and to him they go hand in hand.

“It’s a ton of fun (playing lacrosse),” he said. “My whole group of friends play. All six of us started (on varsity) as freshmen, so we should be pretty good this year. There’s no question it helps me in football. One hundred percent. It helps with my hip movement, and in lacrosse it forces you to back pedal.”

Filiatraut said Hutchinson is a special part of a special team at Divine Child. Its quarterback, Theo Day, is one of the state’s best. Day led the Falcons to the Division 3 Semifinals last season and has committed to sing with Michigan State.

“Aidan gives great effort all of the time,” Filiatraut said. “Honestly, he’s on the shy side. He’s trying to figure it all out. He’s doing his best to be a vocal leader, but it’s not in his nature.