DETROIT – The wait is over for Muskegon.

The Big Reds lost in MHSAA Division 3 Finals four of the last five seasons. And when Ben Williams of Farmington Hills Harrison returned Saturday’s opening kickoff 91 yards for a touchdown, the hearts of Muskegon fans sank a bit.

No reason to be concerned. Senior quarterback La’Darius Jefferson did what he’s done all season. Jefferson scored four touchdowns, and the defense allowed just three points as the Big Reds defeated Harrison, 28-10, in the weekend’s final championship game at Ford Field.

Muskegon (14-0) won its first title since 2008, and it helped take away some of the sting that lingers from last season’s 29-28 Division 3 Final loss to Orchard Lake St. Mary’s – a game where the Eaglets went ahead on a touchdown pass in the closing seconds.

That final score was posted in the Muskegon locker room all season. Every player and every coach saw it every time they walked in.

Not anymore. Coach Shane Fairfield will take that down now that the journey to the championship is over.

“It’ll be all white now,” Fairfield said. “We’ll start all over again with a clean slate.”

This is Fairfield’s first title as Muskegon’s coach. Expectations are high at Muskegon. Fans and alumni expect nothing less than a title, and close doesn’t count.

“I got it off my back,” Fairfield said. “I get to continue what I love to do.”

The Big Reds answered Williams’ kickoff return with an 80-yard, 13-play drive to tie the score at 7-7. Jefferson ended the drive with an 8-yard touchdown run.

Harrison regained the lead, 10-7, on David Hiser’s 26-yard field goal on the last play of the first quarter.

The Big Reds took their first lead during the second quarter on a 69-yard, two-play drive. Jefferson ran 55 yards on the first play, then scored from 14 yards out with 4:29 left in the half.

“We did well with that start,” Harrison coach John Herrington said. “But when you go against that type of size, you get worn down. I thought our defense played well. Passing is not our thing, and they did a good job of stopping our run.”

Muskegon held Harrison (10-4) to 61 yards rushing on 23 attempts., and also just 53 yards on nine completions through the air. The Hawks were held to 42 yards in the second half as Muskegon imposed its will.

Jefferson scored on short runs in the third and fourth quarter, and the defense did the rest.

He rushed for 245 yards on 32 carries, and his four touchdowns upped his total to 33 on the ground this season. He also threw 21 touchdown passes. On this night he didn’t have to throw much; he attempted only two passes, without a completion.

“We’ve gone against some great players here like (Birmingham Brother Rice quarterback Alex) Malzone and (Brother Rice receiver Grant) Perry. I was just hoping our guys could handle it and they did,” Fairfield said.

“La’Darius? What an amazing young man. I watched him play since he was in the seventh and eighth grades. He’s a selfless kid who loves his family. He wants all the kids (in Muskegon) to experience what he and his team have.” 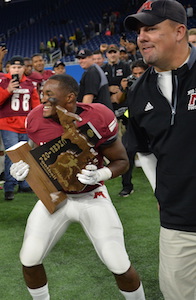 As he has done many times this season, Jefferson went to the opposing team’s huddle at the end of the game to congratulate them on their play. In particular, he went to Harrison’s outstanding linebacker/tight end Ovie Oghoufo, who is committed to Notre Dame, and offered some advice.

Herrington, the state’s winningest coach, completed his 48th season at Harrison. The school is expected to close after the 2018-19 school year, and he said he’d be back for the finale.

The last time Harrison was in an MHSAA Football Final was 2010, when the Hawks won their state record 13th title with a 38-28 victory over Lowell in Division 2.

Harrison was one of only two teams to hold the Big Reds to fewer than 35 points this season, giving them their second-closest game of the fall and closest of a playoff run that saw Muskegon beat five opponents by an average of 37 points.

“Nobody stopped Muskegon all year,” Herrington said. “It was one of the better seasons we’ve had in a while. I enjoy them all. I can’t point out one more than the others.