KALAMAZOO — With a big grin, Isaac DeVries said he was relieved a year ago when he heard his Kalamazoo Christian football team was uniting with Hackett Catholic Prep for the next two seasons.

“My first thought was ‘I don’t have to play special teams’,” the K-Christian senior said, laughing. “There’s more people to play. Getting breaks every once in a while is always good.”

“(Two years ago) we only had 13 players on the team, and that was tough,” DeVries said. “We had to play both ways the entire game. The idea of having more players on our team sounded real nice.

“It was different at first because you didn’t really know the (Hackett) kids, but once we got into the season, it was good.”

One year later, the feeling among the players is more than relief.

Despite graduating 22 players and returning only six letterwinners from 2014, the Hackett/Christian co-operative program – which goes by Kalamazoo United – has 22 players on the varsity and 26 on the junior varsity.

It’s coming off a 6-4 finish and appearance in the Division 4 playoffs. Prior to last season, K-Christian last made the playoffs in 2011, while Hackett last qualified in 2006.

The team’s helmets are black with a “U” on the sides – one half of the U green for Hackett, the other purple for Kalamazoo Christian. Instead of choosing Fighting Irish or Comets – the mascots for those schools – the team is called the Titans and made up nearly evenly of athletes from both.

“The best thing is we’re all friends,” Hackett sophomore Keaton Ashby said. “As a team, we’re brothers. This is a family.

“Personally, I love how we all treat each other. We’re not Hackett and Christian; we’re Kalamazoo United.”

“(K-Christian AD Jerry Weesies) and I were concerned with the health and safety of the kids with so few numbers,” he said. “It’s hard to maintain a football program if you can’t provide a junior varsity program.” 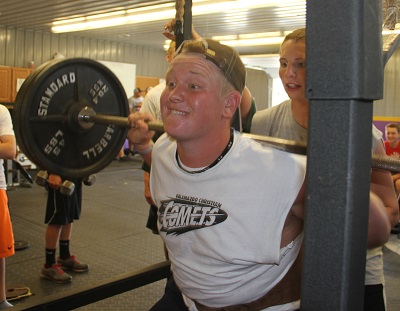 While talking about combining the two rivals into one team, much of the concern came from parents.

“We initially knew we were going to get push back,” Weesies said. “We knew from both sides there would be some faith-based religious push backs. Also push back from the rivalry. We anticipated it. It was there initially and died quickly.

“What changed the course so quickly, once we started moving forward in spite of some of the push back, was the kids got along so well and so quickly started doing summer activities together that some of the parents said, ’Oh, look at my son. He’s happy. These are just kids.’”

As the victories started coming, that brotherhood strengthened.

None of last year’s players had previously experienced the playoffs. United lost to Eaton Rapids 36-0 in the first round, but that’s only made the players hungrier for success.

“It was great, sitting there at the (MHSAA playoff pairings show) watch party, watching to see who we were going to play,” Hackett senior Jacob Buchman said. “It was one of the best feelings in the world.”

While the players are brothers in football, that doesn’t diminish the rivalry in other sports.

“Everyone wants to win that one, just to get bragging rights during football season,” he said. “It’s always fun playing Hackett in basketball and (to) see all the guys you know cheering against you.”

Three of the football team’s six returnees are team captains.

Patrick Koning was chosen by the coaches.

“He is a leader both in the weight room and in conditioning,” first-year head coach Jesse Brown said. “He’s a charismatic leader.”

The other two were chosen by team vote.

Buchman, a unanimous choice, “is the hardest worker and put in the most work over the summer,” Brown said. “He’s always uplifting, and people listen when he speaks.”

The third captain is Jordan Corstange, who “leads by his performance,” Brown said. “He’s very important with what he does on the field.”

The fourth will be chosen weekly by the coaches based on his performance.

“It could be a different guy every week or it could be the same one for a couple of weeks,” Brown said.

Ashby will lead the team at quarterback.

“He has a big frame and a strong arm,” Brown said. “He’s a very intelligent player, and that made the coaches’ decision unanimous.”

This year’s United team not only has a new coach but also a new affiliation: the Southwestern Athletic Conference. When the Kalamazoo Valley Association disbanded this spring after more than 65 years, United became part of the 20-team SAC and opens the season by hosting Decatur on Thursday.

The team will play in the SAC Division 1 with Coloma, Fennville, Watervliet and former KVA partners Constantine and Delton Kellogg

“The (SAC) merger has changed some things for us,” Brown said. “It’s schools that are comparable to the size of Christian and Hackett. The KVA became unbalanced with the size of schools.

”As the enrollment in Hackett and Christian was going down, others were going up. It’s hard to take a team with 17 to 25 kids going against one with 60.”

Koning said there will be adjustments to playing in a new conference.

“The difference is that with the KVA, it’s been there for a long time, as long as I can remember,” he said. “You knew what was going on with each team.

“Some teams would run the same formation every year. This year, we don’t know much about each team, so it’s just going to be adapting to each team we play.”

While the players might not be familiar with the SAC, Brown and three of his assistants played in the conference. Brown graduated from Martin High School, David Arrasmith and Rob Hardy from Gobles and Vinny Church from Bloomingdale.

“Some of our (13) coaches don’t know which school these (United) kids are from, and that’s a really neat thing,” Brown said. “You just can’t tell. They’re all stand-up young men.”

Summer conditioning and workouts take place at K-Christian, but the team’s home field is Soisson-Rapacz-Clason Field, which was shared by both Hackett and K-Christian football teams in the past.

A few players dropped out of the program when the teams merged.

“I play for the love of the sport,” Koning said. “Some people who didn’t love it left. We just love the sport. It doesn’t matter who you play with or how you get to play, you just play.

“I learned how easy it is to have chemistry with new people. The chemistry with both schools coming together. We really meshed, and this year was easier than last year because we already knew each other.”

“The team’s goal last season was to be successful,” Visser added. “There were a lot of people doubting the whole United thing. We wanted to just go out there and win some games and be successful.”

But this season, expectations are higher: “We want to make the playoffs again,” Visser said.

Ashby said he hopes the co-op team continues past this season.

“I think this is the greatest thing that Hackett and Christian has ever done,” he said. “We put ourselves out there every single day. Honestly, we are improving even more. This is a great opportunity to keep going with another contract.”

PHOTOS: (Top) Kalamazoo United running back Jacob Buchman breaks through tacklers during a game last season. (Middle) Patrick Koning, a captain this fall, works out while spotted by teammate Isaac DeVries. (Below) Coach Jesse Brown is in his first season leading the program. (Top photo by Dan Cooke; others by Pam Shebest.)