DETROIT – Not once had Muskegon Mona Shores been held under 33 points this season. Keeping opponents off-balance with their veer option attack, the Sailors averaged 45.6 over 13 games leading up to Saturday’s Division 2 Final, and 47.5 per game during the playoffs.

But Mona Shores hadn’t faced a defense like the one Warren DeLaSalle brought to Ford Field.

Since allowing 36 points to Muskegon in its opener, DeLaSalle’s defense has been as formidable as any in the state – and the Pilots demonstrated that once again on the big stage.

Yes Bear Bryant, defense does indeed win championships (the iconic college football coach is considered to have been the first to make that statement). The Pilots (12-2) held their five playoff opponents to a combined 36 points on the way to not only repeating as Division 2 champions but winning their third title in five seasons.

“Our defense was lights out,” DeLaSalle coach Mike Giannone said. “They’ve been that way all year, and I want to compliment them on it.

“Offensively, we did what we had to do.”

The Pilots set the tone on the first series when Dobbs and safety Derek Roskopp stopped running back Sincere Dent for a four-yard loss on a 4th-and-1 from the Mona Shores 35. The Sailors also went for it on a 4th-and-1 on their next series and were stopped short. The latter stop led to DeLaSalle’s first touchdown, a Nolan Schultz one-yard sneak to give the Pilots a 7-0 lead.

Mona Shores (12-2) tied the game with 1:26 left in the half on a two-yard run by quarterback Casen Boersma. The Sailors had but one first down before their scoring drive, and they received a boost when Dent, a 5-foot-11, 217-pound senior, busted loose for a 24-yard run. Boersma then ran 17 yards to set up his score.

It was a ragged first half as each team gained three first downs, punted four times and combined for 183 yards.

Each team scored on each of its first two possessions to begin the second half, and Schultz’s second one-yard touchdown run gave the Pilots a 21-10 lead with 10:44 remaining.

Mona Shores answered with an eight-play, 63-yard drive that ended with Boersma’s 14-yard touchdown pass to Da’Varius Carter with 7:26 left.

The Pilots put the game away with their best drive, which took 5:29 off the clock and ended with Schultz’s third one-yard sneak for a touchdown. The 12-play drive went 65 yards, and DeLaSalle used 11 running plays, eight by running back Evan Vaillancourt. Vaillancourt gained 24 yards on the drive and had 52 for the game on 18 carries. 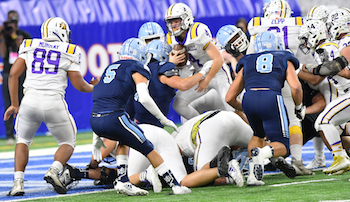 “Hats off to DeLaSalle,” Mona Shores coach Matt Koziak said. “Defensively, they are tough. I thought our defense did well matching up with their physicality. Then it became a possession game. They wanted to run the clock, and that’s what they did.”

Yes, it was a team effort by the Pilots – but two players stood out: Dobbs and Schultz.

Schultz, a senior, was third on the depth chart before the start of the season. Junior Anthony Stepnitz was the starting quarterback, but he suffered an injury in the fourth game against Birmingham Brother Rice, and Schultz took over the following week.

“(Assistant coach) Bob Schroeder called me up after Anthony went down and told me to try Schultz,” Giannone said. “He liked the fact he was a gamer. He was our starting safety, and I didn’t know if I wanted to do that. He started some (at quarterback) on the JV as a sophomore, and we decided to go with him.”

Giannone simplified the offense until Schultz gained confidence. Accounting for 300 yards in total offense against Detroit Catholic Central in a 24-6 victory at Ford Field in the Catholic League championship game did much to build upon that confidence. After a so-so first half against Mona Shores, Schultz was 6-of-7 passing for 132 yards and one touchdown during the second. He also rushed for 41 yards on five carries over the final 24 minutes.

“We’ve been to Ford Field before,” Schultz said. “It wasn’t a big deal for us.”

Dobbs led all players with 16 tackles and forced one fumble. At receiver he had three receptions for 65 yards and one touchdown, a 44-yarder that gave DeLaSalle a 14-7 lead.

“He has a great nose for the ball, and he has great instincts,” Giannone said. “To play with your friends, it means more. These guys have been playing a lot together. It’s more fun.”

Dobbs couldn’t decide which play was more fun, the stop on fourth down or the touchdown catch.

“Everybody did their job,” Dobbs said. “Our defense is amazing. It’s all you can asked for.

“We didn’t see any weaknesses on film (of Mona Shores). They have a big running back. They have a good quarterback, and they have two good receivers. We knew they wanted to run the midline and the veer. Our coaches prepared us for that.”

Giannone completed his third season at DeLaSalle after spending 15 at Macomb Dakota, where he led the Cougars to two MHSAA Division 1 titles. Much of the credit for the play of his defense goes to Brandon Bush, a starter on the second Dakota championship team (2007), and he’s been Giannone’s defensive coordinator all three seasons at DeLaSalle.

“He was coaching the freshmen at Dakota,” Giannone said. “I saw in him somebody I could trust. It’s all continuity. At Dakota we had the same staff for 15 years. We try to pay it back.”