DETROIT – Saturday’s celebration began with respect, senior linebacker Paul Engram said, for an opponent that had become familiar and frustrating.

Detroit Loyola hasn’t lost a regular-season game since 2010. But the Bulldogs also hadn’t solved Ishpeming in their first two MHSAA Division 7 Final matchups, falling to the Hematites to end both of the last two seasons despite obvious size and arguable speed advantages.

“Football isn’t always about just playing a game. It’s about life. We really learned a lesson about how to stick together and trust, what love and trust are really all about. Because that’s what we were missing the last couple of years.”

Loyola had all of the above Saturday morning in defeating Ishpeming 29-8 to claim its first MHSAA title.

Just as in 2012 and 2013, Ishpeming scored first. But this time, the Bulldogs responded with 29 unanswered points dominating with the physicality that has helped it build a 65-10 record under coach John Callahan since he took over the program in 2009.

“Passion, motivation. Us losing two times in a row, we just really had a goal,” said senior running back Marvin Campbell, who like Engram had played prominent roles on all three Finals teams. “We just knew we had to get this done.” 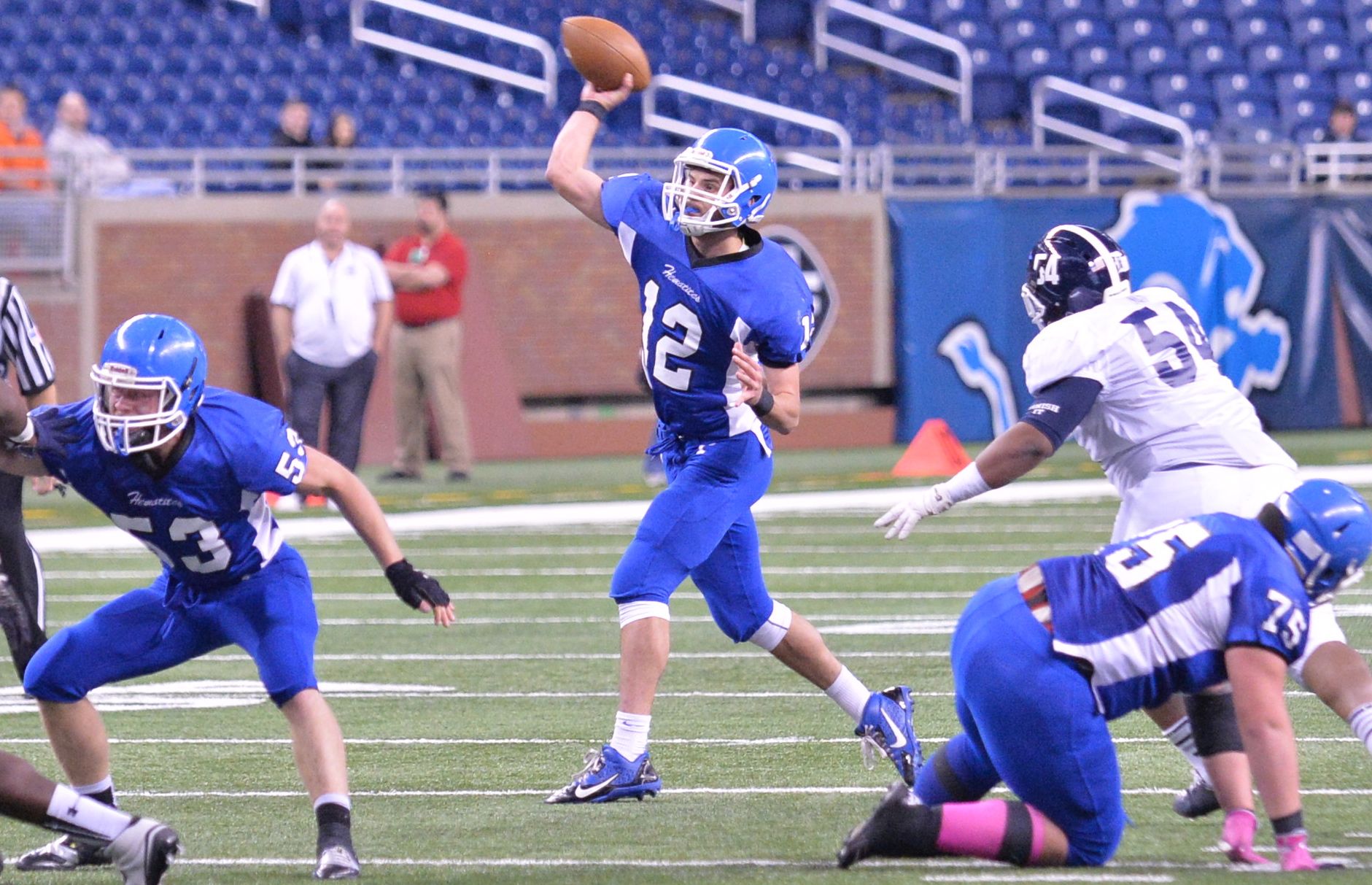 Campbell finished with 215 yards on 21 carries with all four of Loyola’s scores – on runs of 47 and eight yards in the second quarter, 66 in the third and five yards in the fourth.

The first touchdown would’ve come earlier – a two-yard scoring run was called back because of a penalty – and Ishpeming junior Thomas Finegan intercepted a Loyola pass on the next play. With junior quarterback Ozzy Corp either running or completing passes on 10 plays, the Hematites responded with a 13-play, 90-yard drive capped by his 1-yard scoring run and two-point conversion pass with 1:03 to go in the first quarter.

But Loyola (14-0) made adjustments – taking opposite tacks for each side of the field.

Callahan had traveled to watch Ishpeming twice this season, including against eventual Division 8 semifinalist Beal City when those teams met in Week 6. Callahan noticed how the Aggies tried to defend Ishpeming’s powerful run – and came back to a defense he’d used coaching Pontiac Notre Dame to a league title before moving to Loyola. The “nitro” defense took all of his players off the line and gave a look of seven linebackers able to range side to side.

“(Nitro) gives us better vision,” Callahan said. “With what they ran, they were going one way or the other.  It gave our guys the opportunity to move as quick as they were and get to the spot.”

Meanwhile, the Bulldogs did just about the opposite offensively, as the game wore on getting back to the fundamentals of its base power running game that had served so well the last four seasons. 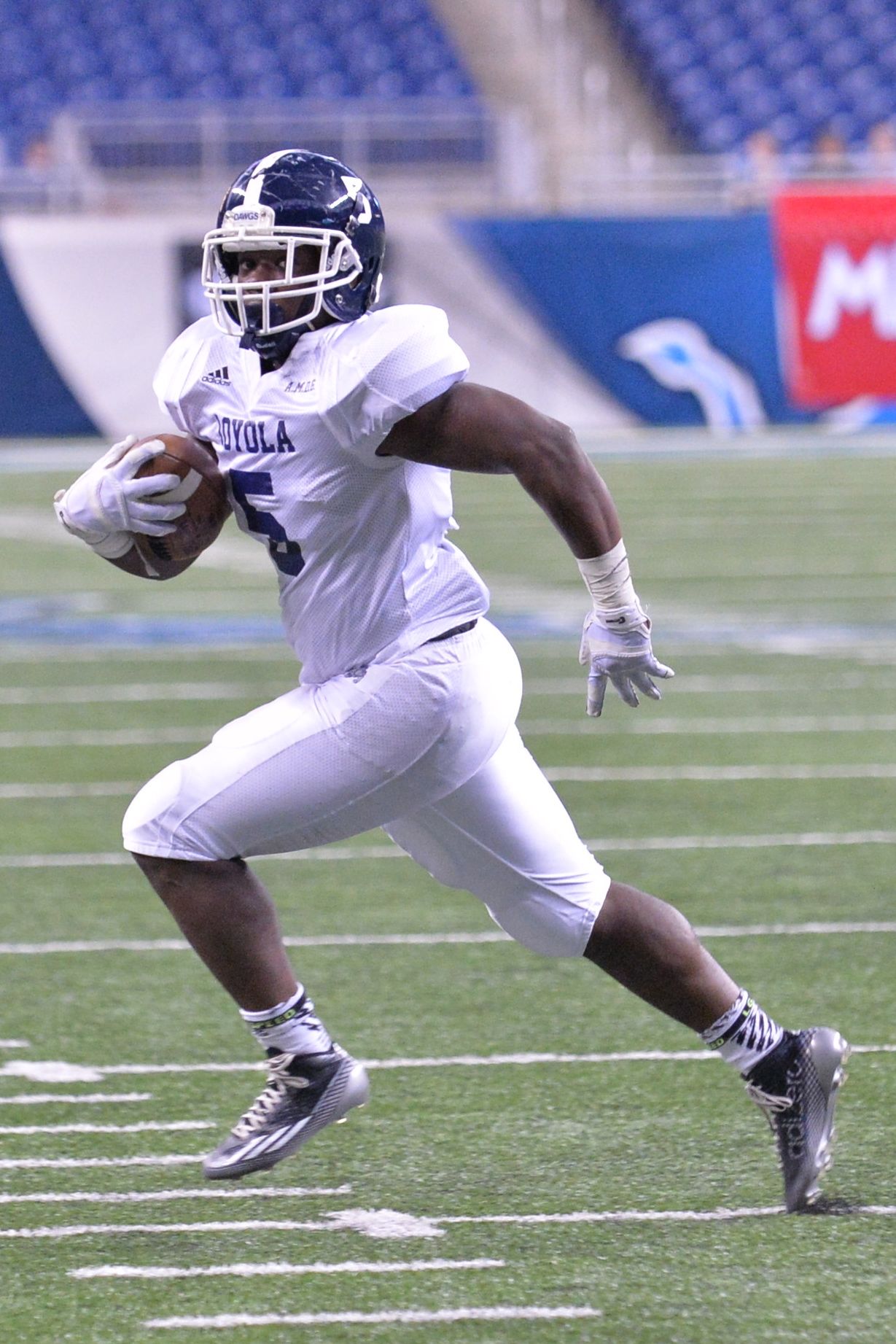 Loyola finished with 297 yards on the ground, with senior Mideyin Wilson picking up 75 on 16 carries.

“Those guys are seniors now, all those guys we played before,” Ishpeming coach Jeff Olson said. “They’re big. They’re strong. They were better than us. There are only so many things you can do, and we tried a lot of different things, a lot of different blocking schemes. They just dominated us at times.”

Corp turned in another courageous performance without senior teammate and top back Ozzy Hakkarinen to assist – the latter was injured in last week’s Semifinal. Corp ran for 198 yards in that game, and added 111 yards passing to the team’s lone score Saturday.

Senior Dominic Suardini had 14 tackles for the Hematites (12-1), which had won 33 straight games entering Saturday – good to tie for eighth-longest winning streak in MHSAA football history and fourth longest among streaks to take place entirely during the playoff era (beginning in 1975).

“People don’t understand how hard it is to get here. When you do it three times in a row and win two, people think it gets easy,” Olson said. “We had some tough teams we had to play along the way, and you’ve got to beat those teams. And those teams are giving you everything they have. You can’t just have talent; you’ve got to have great kids, got to have competitors. We had that.”

MARVELOUS MARVIN - Marvin Campbell rushed for 215 yards and four touchdowns for Detroit Loyola in its 29-8 Division 8 victory over Ishpeming. Here's the third score on a 66-yard run.

Watch the entire game and order DVDs by Clicking Here.