ADRIAN – As the final seconds ticked off the clock in the 2019 Division 8 Regional Football Final at Reading, Adrian Lenawee Christian assistant coach Jon Willett started looking for his wife.

Reading would be going on to play the next week, while the LCS’s season was over. Willett desperately needed oxygen. He could barely breath.

Hillary Willett, Jon’s wife, pulled the car as close to the Reading field as she could, and Jon opened the door.

“I got in the car and sat down,” Willett said. “And I looked at her and I said, ‘I just coached my last game.’”

As miracles go, Willett was wrong. Less than two months after that football game that Willett thought was his last, he underwent a double lung transplant at the University of Michigan Hospital. He still doesn’t know how he survived so long, but is certain there was divine intervention.

“I’ve always had a close relationship with Jesus Christ,” Willett said. “And I’ve always been passionate about football. I always thought that if I survived, I would use football as a tool to reach younger people. I’m doing that today.”

Willett helped coach the Cougars to last season’s 8-Player Division 1 championship and is back on the sidelines this season, coaching the Cougars JV team and continuing to serve as an assistant with the varsity.

He even gets in on some drills now and then, such as doing push-ups with the quarterbacks.

“Jon has been with me for seven or eight years,” LCS varsity head coach Bill Wilharms said. “He’s a great man and a great football coach. The kids love having him around, and he loves them. I love coaching with him, and he’s a big part of our coaching family.”

Willett grew up in Sand Creek, about 10 minutes south of Adrian in Lenawee County. He played on some outstanding Aggies football teams for Hall of Fame coach Ernie Ayers. Willett led the 1990 Aggies in rushing, finishing just shy of 1,000 yards his senior season.

He got into coaching when his sons, Noah and Isaiah, began playing flag football.

“I coached them in flag football, then in Pop Warner,” Willett said. “I love coaching football. When Noah was in middle school I coached him one year, then became an assistant for the varsity.” 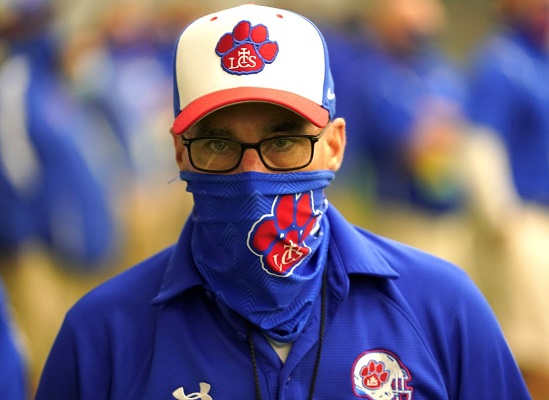 Wilharms tabbed Willett to be the JV head coach, a position he’s held for the last couple of years. He also coaches varsity wide receivers and defensive backs and will assist the LCS scout team quarterbacks at practice. He jumps in whenever needed.

Sometimes, it’s as a motivational speaker.

“I share my testimony whenever possible,” Willett said. “I tell my players that life is short. You never know how long you are going to have. You truly don’t. You have to live your life to the fullest.”

Willett first was diagnosed with idiopathic pulmonary fibrosis – chronic, progressive lung disease – in April 2017 when he visited the doctor due to a constant cough and shortness of breath. The prognosis was not good.

“The doctor said at that point I had 65-percent capacity of my lungs,” he said. “They gave me three to five years unless I could get a double lung transplant. They said that would be the only option and that there was no cure.”

Willett believed the doctors, of course, but admits he wasn’t the best patient.

“I figured if I could make it 10 years, my kids would be out of school,” he said.

The disease had other ideas. While he was put on oxygen due to shortness of breath, his LCS football players had no idea.

“I never did it in front of them,” he said. “I should have. I wasn’t a very good patient. I was wanting to be with the team. I wanted to coach.”

“My lung capacity had dropped,” he said.

He continued to coach. He had some doctors’ appointments here and there but remained coaching the entire season.

“It was a mental thing,” he said. “I wanted to get through the season.”

He rode the bus to the LCS-Reading game. When the game was over, he told Wilharms that he had to go home.

“I told Coach Wilharms that I was just getting in the car with my wife,” he said. “She pulled the car up to the gate because it was so hard to walk. I couldn’t get air because of not having oxygen.”

When he told his wife that he thought he would never coach again, she said no.

“She looked at me and she said, ‘(You’ve coached your last game) with those lungs.’”

By Christmas of 2019, Willett had been in and out of the hospital on numerous occasions. He was on oxygen tanks around the clock. He went home at Christmas, believing it was his last.

“I said I want to go home. I think it’s my last Christmas. I wanted to be with my family,” he recalled.

When he returned to the hospital after Christmas, his son Noah sat in the backseat during the car ride changing out oxygen tanks every few minutes just to keep his father alive. Willett’s oxygen levels were dangerously low. 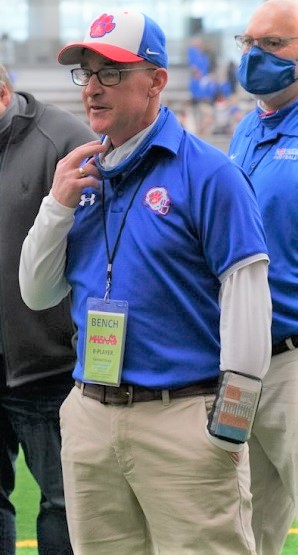 “When I got to U-M, there was a whole team of people waiting for me. They worked on me and sent me up to ICU. It was bleak,” he said.

The LCS community sent out word via social media to pray for Coach Willett, his wife, two sons and two daughters, Emily and Abigail. Willett said those prayers were answered.

Willett was told by doctors he had to have a double lung transplant within 24 hours, or he would die. Seven hours and 13 minutes later, the doctor walked in, with tears in his eyes, and told the family they found a match.

Willett is feeling better now. In February of this year, about a month after Willett watched from the sidelines as LCS won the championship in Brighton, the medications he had been on took hold and he began to improve.

When the season started this summer, Willett was no doubt going to be part of the Cougars staff.

“Everything is very stable right now,” he said. “My lungs keep getting better. I can tell at football practice, walking from end zone to end zone, I’m feeling better. I’m building up. That exercise helps.”

Some day he plans on reaching out to the family of the person who donated lungs to him. For now, he’s grateful to be alive and thankful for every moment he gets to spend coaching football.

“I’m feeling great and loving the opportunity I have to keep coaching and be with the kids,” Willett said. “The story I get to share with my players is truly a miracle. God took me to the point where it was 100 percent out of my control.

“If I can use football as a tool to keep talking to the youth and help them become better men, I’m going to do that. Football is what drives me.”