Ryan Alexander was in a familiar place this past Thursday.

The Marine City senior running back was at East China Stadium, the junior varsity team on the field in front of him playing against Warren Woods-Tower and a group of junior program football players behind him, preparing to get onto the big field and play at halftime.

He and his Mariners teammates were coming off a win against archrival St. Clair, and had just finished their last practice in preparation for a Week 7 game against Warren Woods-Tower, one they would also win.

All of that is familiar for Alexander and the Mariners. The start of the season, however, was far from it.

“It was a new feeling, but it was also a sense of motivation. It pushed me harder knowing that we had something to prove and that everyone was doubting us because we were 0-4. It’s hard to go through, but I think it made us a better team.”

Alexander and his teammates are on the road back, sitting at 3-4 and eyeing two more wins which could possibly preserve the school’s streak of qualifying for the postseason, which started in 1998. He said getting there would show those junior program players that by coming together as a team, you can accomplish anything.

The Mariners have already shown their coach plenty.

“I wondered, because our program has had so much success, what would happen if we had a bad start like this, how would that team be and how difficult would it be to coach,” Marine City coach Ron Glodich, who is in his fifth season as head coach after serving as a longtime assistant in the program. “What I found is these kids are incredible. Their perseverance and their work ethic has not changed. Nobody has quit, even though I challenge them week in and week out, nobody has quit. The bigger the challenge I give them, the bigger they step up.”

Football in Marine City has a bit of a “Friday Night Lights” feel to it.

The town with a population of a little more than 4,000 essentially shuts down on game nights to support its team. Not long ago, it moved trick-or-treating because it conflicted with a Friday night playoff game. When the team went to Ford Field for MHSAA championship games in 2007, 2011 and 2013, it filled its entire side of the lower bowl with fans clad in orange and black.

“They were always winning, ever since I’ve been a kid and ever since my parents have been around,” senior lineman Andrew Steinmetz said. “It’s a great feeling to grow up here, live here and then play here.”

Always winning isn’t hyperbole, especially for someone Steinmetz’s age. The playoff streak is only scratching the surface of the Mariners’ success in the past few decades.

The program won MHSAA championships in 2007 and 2013, and – prior to this year – had lost more than two games in a season only three times since 1992.

From 2006 through 2009, Marine City had three undefeated regular seasons, and in the only exception, it went 13-1 with a Division 4 championship. The Mariners’ last losing season came in 1982.

There have been stars who went onto play Division I college football – Brendon Kay, a 2008 graduate went to Cincinnati and was the Most Valuable Player of the Belk Bowl, and Anthony Scarcelli, who was the Associated Press Division 3-4 Player of the Year in 2011 and is currently a senior on Central Michigan University’s football team – but most of Marine City’s success has come thanks to players who don’t have a recruiting site ranking.

“When you mention the name Marine City outside the area, it’s common for someone to say, ‘Oh, you’ve got a great football program,’” Glodich said. “And we’re proud of that. It’s been a long time since we built it, and a lot of people are proud of it in the area and they come out to support it. It’s nice that that’s linked to the town, and that people believe we have a great football program. And I believe we do.” 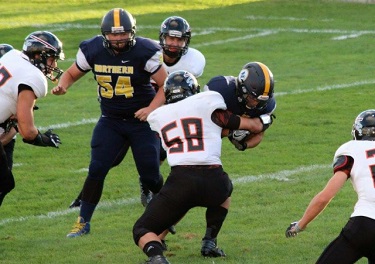 In Marine City, even 8-1 teams catch flack. At 0-4, the loud minority of the fan base gets more vocal.

“The good news is, I’m at the point in my career where I know that this staff does a great job. So when you get letters like that, you chuckle and say, ‘OK, this person is venting, but they don’t know what the hell they’re talking about.’ And I would tell that person if they ever had the guts to look me in the eye, I would tell them, ‘You don’t know what the hell you’re talking about.’”

Glodich’s players said they were able to shut out the outside noise, for the most part, and anything that did enter their brains was used as motivation. Alexander said it went in one ear and out the other, because practicing with a clear mind was much more necessary than reacting to insults.

Even better, however, was the fact there was much more support than derision. Marine City may be football crazy and unaccustomed to waking up on a Saturday after a loss, but its love for football goes beyond a stunning win-loss record.

“The parents and the past players, they really had our backs,” senior lineman Tom Kaminski said. “(Former player) Ethan Cleve made a nice Facebook message on the Marine City football fans page, and (former player) Jarrett Mathison was saying, ‘Don’t worry about it, it will get better.’”

The message within the team was similar to Mathison’s, but the players knew they were the ones who would have to make things better.

“A lot of it came from themselves,” Glodich said. “After that fourth loss, we challenged them and said you guys make a decision of how you want to move forward. That’s where your senior leadership and the guys that really care about the program, they kind of step forward and they rally the troops. We challenged them come Monday, and they responded to the challenge.”

The change could be seen in practice, and it translated into a 37-29 win against Madison Heights Madison in Week 5. That was followed by a 27-6 win against St. Clair in Week 6 and most recently a 49-31 win against Warren Woods-Tower in Week 7.

“We just had to put our heads down and keep fighting for it, because we knew we were better than what we were,” Kaminski said. “It’s big on your shoulders, because everyone’s used to 9-0 teams here, so that was a big wake-up call, but I think we’ve got it.”

As stated above, while this is a position Glodich never wanted to be in, he said he’s always wondered what would happen if a Marine City team had a start like this one. He’s wondered how the players would react. He’s wondered how difficult it would be to coach a team that no longer held its playoff destiny in its own hands before the midpoint of the season.

“I’m amazed that these kids are working this hard – I don’t know if any other team that was 0-4 is working as hard as we do,” Glodich said. “It’s just a credit to these kids and their background; they’re not afraid to work. The kids that come to school here in this community are not afraid to work, and that’s why I’m one of the luckiest guys in the state to be able to coach in this community.”

The 0-4 start may have put the Mariners on the brink of playoff extinction, but their opponents in weeks 1-4 could wind up helping push them over the top when it comes to playoff selection, should Marine City get to 5-4.

Algonac, Port Huron Northern, Detroit Loyola and Marysville were a combined 25-3 through seven weeks, with one of those losses a Northern defeat against Marysville.

The Mariners are taking the one-game-at-a-time approach to the end of the season, but they know that can help. They know they can do something special to close it out, and accomplish something no Marine City team has done before – rebound from a start that could cause some to pack it in.

Glodich said he can’t look past the next game, but admits he and his coaches have talked to the players about writing the final chapter in their book, and how they want their story to end.

Alexander has already started writing in his head.

“It would mean the world (to finish 5-4) especially because it’s my senior year and I’d love to end on a high note,” he said. “I’d love to be the team that started 0-4, won the last five games and then proved what we have in the playoffs. We have a good team, we have a good shot.

“We just want to get to 5-4. We don’t really focus on anything else (in terms of playoff points). If we get there, it doesn’t matter, we’ll be happy.”