DETROIT — When Jarrett Mathison was told he wouldn't be Marine City's quarterback this season, he could've taken the news the wrong way.

He could've been selfish about losing the marquee position on the football team. He could've sulked, becoming a disruptive force on the team. He could've complained to his parents, who in turn could've made life miserable for coach Ron Glodich and his staff.

Instead, Mathison handled the change with a team-first attitude, even though he had no clue what his role would be with the Mariners.

"There wasn't really a decision until about a week before our first game," Mathison said. "They told me I was going to play fullback. I said, 'OK. I don't care. I'm playing. I've got to do what I've got to do to help the team out.'"

As it turned out, Mathison got even more action this season than he did a year ago when he was the sophomore quarterback for an 8-2 team.

He starred in all three phases of the game, leading Marine City to a 49-35 victory over defending-champion Grand Rapids South Christian in the MHSAA Division 4 championship game Friday at Ford Field.

Mathison intercepted two passes, returned the opening kickoff of the second half 91 yards for a touchdown, and ran 18 times for 103 yards and two touchdowns.

"We had to tell him he could be a benefit on both sides of the ball," Glodich said. "That gamble paid off tonight. He's a warrior. He was better at the end of the game than the beginning of the game."

Mathison never expected to have such an active role in Marine City's success after the quarterback position was turned over to junior Alex Merchant, who was 10 for 12 for 208 yards and three touchdowns against South Christian.

"I thought I was just going to be a person filling in," said Mathison, who scored 32 touchdowns this season. "It just came out for the better. Everything happens for a reason."

Senior Pete Patsalis caught all three touchdown passes for the Mariners, grabbing five passes for 142 yards. Marine City scored on seven straight full possessions, not including a one-play series in which it ran out the clock following a South Christian touchdown with 12 seconds left in the first half. 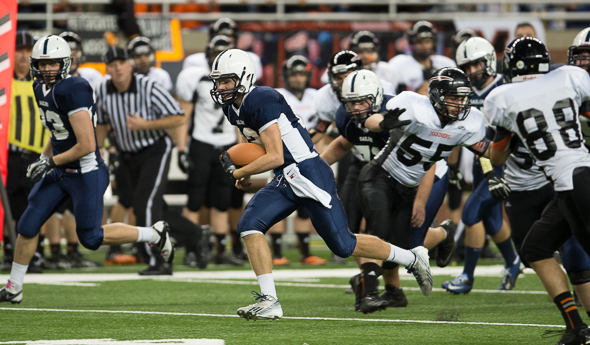 The score was tied 21-21 at halftime when Mathison gave Marine City a huge lift to start the second half. A series of fake handoffs on a kick return that fooled nobody the first time the Mariners tried it worked wonders this time around. Mathison received the kick, turned his back toward the Sailors and faked the ball to three teammates before taking off and getting in the clear.

"The big kickoff return took the wind out of us a bit," South Christian coach Mark Tamminga said. "That was a huge momentum swing there. Give all the credit to them. That's a heck of a football team. We got beat by a better football team."

Still, South Christian was in the game when quarterback Jon Wassink scored from one yard out on fourth-and-goal to tie the game 28-28 with 6:04 left in the third quarter.

The Sailors couldn't stop the Mariners' offense, however. A 65-yard touchdown pass from Merchant to Patsalis with 5:11 left in the third quarter put Marine City ahead to stay. A 1-yard run by Mathison made it a 14-point game.

South Christian got within 42-35 with plenty of time left when Wassink hit Eric VanVoorst with a 19-yard touchdown pass with 10:04 remaining, but Marine City ground out a 12-play, 75-yard drive that consumed 6:15 to get some breathing room. A 20-yard pass from Merchant to Patsalis capped the drive with 3:45 left.

"We told the kids, 'You stay with them until the fourth quarter, then I guarantee you you'll have more in your tank than they do,'" Glodich said.

History was made in this game, as Marine City junior Olivia Viney became the first girl to play in an MHSAA Final. Viney did more than just play, going 7 for 7 on extra points to tie a Finals record for most extra points in a game. Paul Gross of Jackson Lumen Christi also was 7 for 7 in the 2001 Division 5 Final against Livonia Clarenceville.

"I really wasn't as nervous as I thought I would be," Viney said. "My team did a really good job of keeping everyone calm, keeping their heads on their shoulders. I was totally prepared mentally and physically."

Viney finished the season 61 for 65 on extra points, breaking the Marine City mark of 59 extra points in a season. She also had a 30-yard field goal.

The tone for the high-scoring game was set just 58 seconds in, as Wassink hit VanVoorst with a 52-yard touchdown pass to give South Christian a 7-0 lead.

That was the only score of the first quarter, but the pace picked up in the second quarter, with the teams combining for five touchdowns to go into halftime tied at 21-21.

Mathison's 1-yard run put Marine City on the board with 10:28 left in the second quarter.

A 39-yard pass from Merchant to Patsalis with 7:12 left in the second quarter gave the Mariners a 14-7 lead.

Wassink's 50-yard option keeper with 5:36 left in the second quarter tied it 14-14. Tait Sapienza answered for Marine City with an 18-yard touchdown run with 2:05 to go in the half.

South Christian tied it 12 seconds before halftime when Wassink threw a low 8-yard touchdown pass to Kyle Haan, who was able to trap the ball between his legs as he fell across the goal line.

Wassink, a junior two-year starter who missed last year's championship game after breaking his collarbone in the Semifinal, was 18-for-38 for 240 yards, three touchdowns and two interceptions.

"They were more physical than us," Tamminga said. "When you control both sides of the line of scrimmage, you're going to win a lot of football games."