Muskegon High School junior quarterback Cameron Martinez already has shown off a plethora of moves in just the first two weeks of this season.

Week 1 was a display of uncanny patience, field vision and sudden bursts of speed – a combination which produced 30 carries for 290 yards and all five of the Big Reds’ touchdowns during a 36-21 win over visiting Warren DeLaSalle in a battle of reigning MHSAA Finals champions.

Week 2 featured more of an option attack and split-second decision-making (as well as a fourth quarter comeback) during a thrilling 24-21 victory over visiting Detroit Martin Luther King in another blockbuster cross-state matchup.

“I love playing in big games like this, with this atmosphere,” a smiling Martinez said moments after the King game on Aug. 31, as a packed house of more than 7,000 fans exited historic Hackley Stadium.

Martinez has played in big games before, but this atmosphere is a regular part of lining up for the reigning Division 3 champion – which he’s doing for the first time this fall. Midway through his sophomore year in January, Martinez – whose step-father is Muskegon athletic director and head varsity boys basketball coach Keith Guy – transferred from nearby Muskegon Catholic Central (which he led to the Division 8 championship as a freshman) to a larger school and a larger challenge at Muskegon High, which has the winningest high school football program in Michigan.

“When I got here, it was like a family right away,” said the 16-year-old Martinez. “That made the process and the transition so much easier.”

Muskegon coach Shane Fairfield made it clear when Martinez came over that no one is handed a starting position for the Big Reds. Martinez prevailed in a competition with senior Johnny Martin III for the starting position.

Muskegon fans also were skeptical at first, and who would blame them? 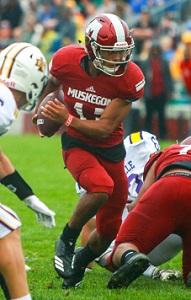 The relatively thin Martinez had to replace La’Darius Jefferson, a 6-foot-1, 220-pound quarterback with the mentality of a fullback who regularly ran over defenders while leading Muskegon to a 14-0 record and a victory over Farmington Hills Harrison in last fall’s Division 3 championship game. Jefferson, who rushed for more than 2,000 yards and was named The Associated Press’ Division 3-4 Player of the Year, is now a running back at Michigan State University.

Martinez won over the Big Reds’ faithful quickly with his memorable performance against DeLaSalle, which featured several highlight-reel long touchdown runs, along with many tough carries in short-yardage situations.

The humble Martinez, whose athletic ability was noticed by Central Michigan University two years ago when he was offered a scholarship as a 14-year-old eighth grader, deflected all of the praise and gave credit to the huge offensive line in front of him. Muskegon’s line averages 6-2 and 330 pounds, and returns four of five starters from a year ago.

Fairfield said both Martinez and the big guys up front deserve credit.

“There is always a spot he’s heading to, and the guys are clearing the way,” explained Fairfield. “But then he is able to improv, and he does things on his own. He is special.”

Next up is a major road challenge Friday at perennial playoff power East Grand Rapids, before the Big Reds finish the regular season with six straight Ottawa-Kent Conference Black games.

Martinez also is expected to be a key contributor this winter on Guy’s Big Reds basketball team.

Now that the Big Red fans have fallen for Martinez, they do have two follow-up questions: Can Martinez continue to run the ball so much and stay healthy for a full season? And can he throw the ball accurately if need be?

Muskegon offensive coordinator Brent White hinted that he plans to share the wealth more as the season wears on to reduce the wear and tear on Martinez. That was certainly the case in Week 2 against King as halfback Jeremiah Lockhart and slots Demario Robinson and Hyrosha Wilson all had key carries.

White plans to introduce more wrinkles to his team’s attack each week, with the goal a more balanced run-pass offense for the big games down the stretch – most notably a looming home showdown on Oct. 12 against undefeated cross-town rival Muskegon Mona Shores – and then the playoffs.

Martinez has 59 carries over the first two games for 444 yards (7.5 per carry) and seven touchdowns. He has yet to complete a pass as a Big Red – Martinez was 0 for 1 through the air against DeLaSalle and 0 for 2 against King.

“We’re a power team, but we can throw the ball if we have to,” said Martinez, who threw for more than 700 yards last year as a sophomore at Muskegon Catholic. “There’s still a lot of room for improvement. I have to protect the ball better and show everyone that I can run and throw. It’s a great start for us, but we have a long way to go.”

Crusaders Making Most of Opportunities

When Cameron Martinez transferred to Muskegon High in January, it was an opportunity for Muskegon Catholic Central sophomore Max Price.

Price, who has a strong arm and was a standout shortstop on the Crusaders’ varsity baseball team as a freshman, proved he was ready for prime time with a strong performance in MCC’s impressive 35-7 season-opening road win at Algonac. 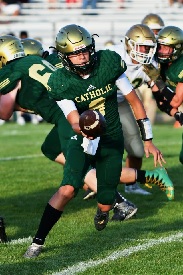 Price threw for 150 yards and a touchdown against Algonac, which has advanced to at least the third round of the Division 5 playoffs each of the last three years. MCC is 1-1 after a 21-7 home loss last week to Pontiac Notre Dame Prep.

The other big offseason news out of Muskegon Catholic was its announcement that it has entered into a two-year cooperative agreement to allow Muskegon Western Michigan Christian students to play football at MCC.

The agreement will bring much-needed depth to the Crusaders’ roster, as seven of its 32 players this fall are WMC students. However, it also will push the perennial Division 8 powerhouse up to a higher division for the playoffs. MCC will now have to combine its enrollment of 126 with 276 students from WMC for a total of 402, which would likely make it a Division 6 playoff school.

MCC, which has won 13 total MHSAA football championships and 12 during the playoff era, won four consecutive Division 8 championships from 2013-16. Christian Martinez, Cameron’s older brother who now plays receiver at Northwood University, was the starting quarterback on the Crusaders’ championship teams in 2014 and 2015.