Jacob Holt will be in the middle of the action, guaranteed, when two great football traditions collide Saturday afternoon in Beal City.

Holt is a four-year starter up front for Muskegon Catholic Central, which ventures toward the middle of the mitten to Beal City in its quest for a third consecutive MHSAA Division 8 championship.

“We know we have to play our best or it will be our last game,” said Holt (6-foot, 245), a senior guard and defensive end for the Crusaders, who were ranked No. 1 in Division 8 in the final Associated Press state poll. “This is a completely different team than the past two years, but our motivation is to uphold the MCC tradition.”

Holt brings a wealth of size, talent and, perhaps most importantly, experience into Saturday’s showdown. He has started nearly 48 games for MCC over the past four years – leading his team to the Semifinals in 2012, starting all 14 games each of the next two years for back-to-back championship teams, and all nine games this year for the 7-2 Crusaders.

Holt is a force on an offensive line which is very good, but not quite the wrecking machine of a year ago.

The new line showed its youth in this season’s opening game at perennial Division 5 powerhouse Muskegon Oakridge. The Eagles rolled to a 31-0 halftime lead and, eventually, a 45-26 victory, snapping MCC’s 26-game winning streak.

Since that game, the Crusaders’ line has come of age behind Holt, who will likely go down as one of the best pulling guards to ever play for veteran MCC line coach and defensive coordinator Mike Ribecky.

“Jacob is just really coordinated and skilled for his size,” said third-year MCC coach Steve Czerwon, whose team has won seven of its last eight games, with its only loss during that stretch coming Week 8 at Detroit Country Day, the top-ranked team in Division 4. “We try to take advantage of that in different ways. We pull him quite a bit and he has played about 20 snaps this season at fullback.” 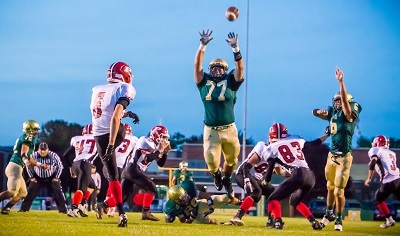 Also missing off those back-to-back championship winners is quarterback Nick Holt, Jacob’s older brother and the unquestioned leader of those powerhouse teams. The Holts also made up the battery of MCC’s MHSAA championship baseball team this spring, with Nick on the pitcher’s mound and Jacob at catcher.

“It’s been weird not having him around this fall,” said Jacob of his older brother, who is now a freshman at Hope College, where he is a pitcher on the baseball team. “I miss riding home with him after every game and every practice and just going over everything. We still text all the time, but it’s not the same.”

Nick Holt had to make a difficult choice between playing baseball or football in college, and Jacob will soon face the same agonizing decision. Among the schools pursuing him in football are Saginaw Valley State, Wayne State, Northwood, Mount Union (Ohio) and Hope, while he is actively being recruited in baseball by Kalamazoo College, Aquinas College and Hope.

Stepping into Nick Holt’s big shoes at the quarterback spot is senior Christian Martinez, who has assumed a more traditional ball distribution role – getting the ball to junior running backs Logan Helton and LaTommy Scott, as well as his favorite aerial target in junior Walker Christoffersen.

Holt gives much of the credit for his success to his parents, Mike and Cathi Holt, who raised their two sons to be both competitive and humble in everything they do.

Mike Holt, now in his 16th year as a science teacher at MCC, has influenced more than just his two sons for the Crusaders’ football program. Holt is the Crusaders’ middle school head football coach and, along with former MCC great and Northern Illinois Hall of Famer Frank Lewandoski, has played a big part in the development of the program’s players for the past six years.

This fall, the school district took it a step further with the formation of the Muskegon Catholic Central Youth Football Club, which was organized by current MCC School Board President Andy Riegler, who quarterbacked the Crusaders to a Class C championship in 1990. Czerwon called the club’s first season “hugely successful.” 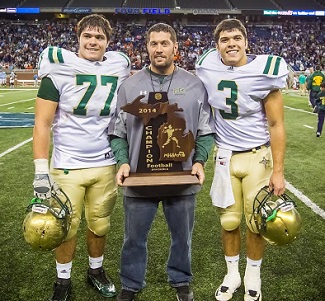 Those kinds of efforts at the lower levels help explain MCC’s continued success, despite steadily declining enrollment over the past 35 years.

“We’re blessed to have quality coaches at the middle school and the youth levels, who really care about the kids,” said Czerwon, who boasts a gaudy 33-4 record in his three years as head coach.

MCC first broke through in the football playoffs as a Class B school, winning MHSAA titles in 1980 and 1982. The Crusaders won three Class C championships in the 1990s and have won five titles in either Division 7 or Division 8 during the first 15 seasons the 2000s.

With a current enrollment of 177 students, MCC is a Class D school in size, but the standards and expectations for the football program have remained as high as ever.

Many of those young kids aspire to someday be like Jacob Holt, big No. 77, who sets a great example for them both on and off the field.

Holt will need to be at his best against a Beal City program that knows all about physical football and playing in November.

While the Crusaders boast 10 MHSAA titles in the playoff era, Beal City has the edge over MCC and every other team in the state with 33 playoff appearances. Farmington Hills Harrison is second with 32, followed by Crystal Falls Forest Park and Fowler with 31. Muskegon Catholic is eighth with 27 playoff appearances.

Beal City (9-1), which was ranked sixth in the final AP Division 8 poll with its only loss coming Week 5 against Evart, will seek to avenge a 35-12 loss to MCC in the 2013 Division 8 championship game at Ford Field in Detroit.

While the two schools are known for football success, their biggest rivalry in recent years has been on the baseball diamond. Beal City knocked off MCC in Division 4 Regional Finals in 2013 and 2014, with the Crusaders getting the upper hand this past spring.

On Saturday, the two schools will meet on the gridiron for a Division 8 District championship.

“We’ve gotten to know Beal City really well,” said Holt, an all-Lakes 8 Conference lineman the past two years. “It’s a chance for us to show how far we’ve come this year. We lost 18 seniors last year, so it hasn’t always been smooth, but I think we’re playing our best right now.”