DETROIT – Christian Martinez ran for 45 yards Friday morning according to the Division 8 championship game box score, but crisscrossed his backfield for at least a few hundred more just trying to stay on his feet.

In a game surprisingly dominated by defense, Martinez scored the only points with 10:21 to play in a 7-0 victory over undefeated Waterford Our Lady that gave MCC its third straight championship.

The teams entered the Final averaging a combined 78 points this season. But four turnovers by the Lakers and a number of stops by both defenses kept the scoreboard blank for the first three quarters.

“I was wondering when we were finally going to bust loose and score,” Martinez said. “They were just well-coached. They read their keys well. They had a really good inside linebacker; he broke on the ball. And then they had some really big defensive linemen who stopped a lot of plays up front before they even started.”

Martinez was complimentary of the Lakers’ defense for good reason. Both defenses shined – Our Lady held MCC to 215 yards and allowed only five third-down conversions in 12 tries. The Crusaders held the Lakers to 241 yards, but intercepted four passes and allowed Our Lady only four first downs on 12 third-down attempts.

Our Lady hadn’t been shut out since 2011. MCC had been held to single digits only one other time over the last three seasons – by Division 4 semifinalist Detroit Country Day in Week 8 of this fall.

All of the offense MCC could muster came together as the third quarter turned into the fourth. Our Lady looked to have another stop in hand with the Crusaders facing 3rd-and-4, but Martinez followed his blockers for a 14-yard gain down to the Lakers' 32-yard line. Senior Walker Christoffersen followed with a 24-yard run to the 8. Martinez then watched towering offensive tackle Jacob Holt block two defenders to set the edge, and followed for an 8-yard scoring run.

MCC (11-2) entered this season on a 26-game winning streak and abruptly lost in Week 1 to Muskegon Oakridge. After two seasons of complete dominance, three games this fall were decided by 14 points or fewer – which may have paid off when it mattered most.

“I was extremely happy that we were able to gut it out,” MCC coach Steve Czerwon said. “We’ve been in quite a few close games this year, maybe some more than past years. A lot of grit, a lot of integrity out of these guys.” 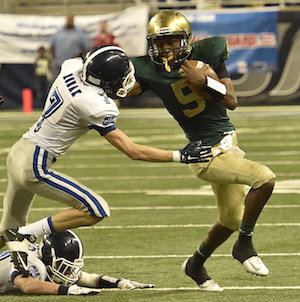 And a great strategy on his staff's part. The Crusaders played with four defensive backs deep to try to contain an Our Lady offense keyed by senior quarterback Clay Senerius, who had thrown for 2,913 yards and 34 touchdowns entering the day.

Christoffersen had two interceptions, including one in the end zone as Our Lady drove for a tying score with 3:21 to play. Senerius still finished 17 of 27 passing for 193 yards, but the Lakers had difficulty stringing enough positive plays together to get other drives rolling.

Our Lady did try a field goal midway through the first quarter but missed left from 35 yards out. The Lakers gained first downs on two fourth-down conversions, but their one failed fourth-down attempt came later in the first quarter when an incomplete pass ended a drive at MCC’s 16-yard line.

“The play at the end (of the game) is the one everyone is going to remember, but we had our shots there in the first half,” Our Lady coach Josh Sawicki said. “We’ve been aggressive all year. We’ve gone for it on fourth down all year. We don’t change our strategy and who we are and what we do just because of the big stage.

“Most of the time we come up with those big plays on fourth down. That’s when we bear down. It just didn’t go our way today.”

Our Lady, back in a Final for the first time since 2002, allowed only one opponent this season to come within 25 points. The Lakers (13-1) finished with their most wins and points (542) in school history.

Holt had 6.5 tackles and senior linebacker Nathan Jones and junior linebacker Andrew Schulte both had six for MCC. Christoffersen ran for 113 yards to go with his interceptions.

“We’ve had really good coaching. We had good players run routes on us, really good teaching throughout the week, and it resulted in a really good play I made in the state championship,” Christoffersen said. “I knew that was a really big play, and I was really happy I could make a play for my team.”

PHOTOS: (Top) Muskegon Catholic Central’s Walker Christoffersen snags one of his two interceptions in the Division 8 Final. (Middle) MCC quarterback Christian Martinez works to break away from an Our Lady defender.