After a week of getting emotional when asked what it would be like coaching his son, Drew, for the final time in the MHSAA Division 6 Final, he told himself that he wouldn’t cry again if asked the question after the game.

He accomplished that feat, making him perfect on the night.

The Collins family will be celebrating their final game together forever, as they claimed Montague’s third Finals title with a 40-14 victory over Clinton at Ford Field.

“You can’t finish any better than that,” said Patrick Collins, who has been at the helm for all three Montague titles. “How does it get any better? It’s been a phenomenal run. Just pinch me, man. I just can’t believe it. I think all the coaches feel like (the players are) all our sons. We treat them all the same. … It’s special, because we’re tight. There’s a lot of love and a lot of guys playing for each other.”

While the postgame press conference was tear free, the Montague sideline was not as the clock ticked down in the final quarter. A program that had come agonizingly close in each of the past two years – losing in the Final in 2018 and losing a thriller of a Semifinal in 2019 – had broken through for the first time since winning back-to-back titles in 2008 and 2009.

“Everybody on this football team, coaches, players, trainers – everybody on this football team loves high school football,” said Drew Collins, the Montague senior quarterback who accounted for five touchdowns on the night. “I love high school football. I love these coaches. I love my friends on the team. I love everybody on the team. I love the community. It’s bittersweet when you win a state championship when you’re a senior because it’s all over.”

Drew Collins, who was The Associated Press Division 5-6 Player of the Year, made the most of his final game in a Montague uniform, throwing for 244 yards and three touchdowns on 15-of-19 passing. He also rushed for 51 yards and two scores.

That led an offensive attack which put up 390 total yards and scored on all but two of its possessions – one of which ended on downs late in the fourth quarter as the Wildcats were attempting to run out the clock. 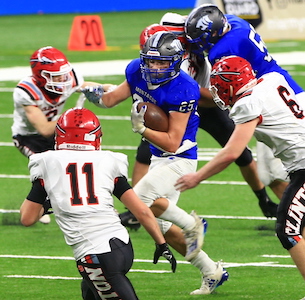 “I just think they can do it all,” Clinton coach Jeremy Fielder said. “When you look at their team, look at what they have up front, look at the athletes they have in space, then you put a quarterback on that team, and you put a very experienced team out there, as well. That’s a lot to deal with. They’re a great football team, and I give them a lot of credit; they’re a great program.”

All three of Collins’ touchdown passes went to Sam Smith (nine, 44 and 26 yards), who had five receptions for 96 yards total. Tugg Nichols added five catches of his own for 89 yards, while Dylan Everett had 52 yards and a touchdown on nine carries.

While Montague’s dynamic offense put on a show, it was the defense’s second-half performance that allowed the Wildcats to pull away. Clinton (10-2) trailed 19-14 at the half but had put together a pair of 80-yard drives. The first finished with an eight-yard George Ames run, and was fueled by a long Brayden Randolph run. The other was a clock-killing masterpiece fullhouse backfields are known for and was closed out with a two-yard Bradyn Lehman run.

Each of those drives followed a Montague drive that ended with a touchdown pass from Collins to Smith. The Wildcats took the halftime lead with Everett’s two-yard touchdown run.

Clinton’s first two drives of the second half, however, ended with turnovers – the first on downs, and the second an interception by Montague’s Trey Mikkelsen. The Wildcats turned both turnovers into touchdowns – Collins’ third TD pass to Smith, and a nine-yard Collins TD rush – and started to put the game away. Collins’ final touchdown run of the game, a 23-yarder in the fourth quarter, erased any doubt.

“I thought the coaches did a great job – our staff is phenomenal,” Patrick Collins said. “We did some adjustments. But really, this team is run by the players, and it starts with the seniors. Their determination is what makes a difference. It was about their heart coming out in the second half and finding the energy to stack up to a great Clinton team, honestly. That Clinton team can bring it, and they brought it today.”

Randolph led the way for Clinton in his final game, rushing for 194 yards on 23 carries. He also had eight tackles, while Lehman led the Clinton defense with nine tackles, and Nik Shadley had six.

“We’re fortunate, we have about 15 or 16 seniors, and at our level, you win with seniors,” Fielder said. “We were able to make some key plays at some key times, and I think it was really big for us, too, when we got shut down (for the statewide pause), we had that senior leadership. We had a group of seniors who had won a wrestling state championship together last year, so they’ve been here before. As a coach, you’re looking at these guys in the huddle, and you’re looking at these guys on the sidelines, you know you’re in pretty good shape. We just ran into a team that was outstanding.”

Izac Jarka and Colton Blankstrom each had eight tackles to lead the Montague defense, while Mikkelsen and Alex Waruszewski each had seven.

PHOTOS: (Top) Montague celebrates its first Football Finals championship Saturday since 2009. (Middle) The Wildcats’ Samuel Smith breaks through an opening as Clinton’s Bradyn Lehman (6) and others close in. (Click for more from Hockey Weekly Action Photos.)