It might come as no surprise to many, but we could be watching the best quarterback that's ever been a part of the rich football history at Detroit Martin Luther King.

Let's begin with Darnell Dickerson, an `86 King graduate. Dickerson was the Detroit News' No. 1 Blue Chip prospect and went on to play at Pittsburgh. More recently there's Dequan Finn, who led King to the 2016 Division 2 title. Finn is currently the back-up quarterback at Toledo.

Now there's Dante Moore. Moore (6-foot-3, 200 pounds) is still a junior, so there's still much for him to accomplish, and for us to witness, at King.

As a freshman, Moore led the Crusaders to the Division 2 title game before they lost to Muskegon Mona Shores, 35-26. Last season, King lost to River Rouge, 33-30, in a Division 3 Regional Final. This season, King is 5-1 and one of the favorites to win the Division 3 title. Its only loss was Carmel High, 42-40. Carmel (6-1) is one of the top teams in Indiana.

Tyrone Spencer is in his sixth season as King's head coach and he realizes, with Moore, he has a special player.

“He's very poised, mature for his age,” Spencer said. “He's a class act on and off the field. He's got a great arm and great accuracy.”

Moore, 16, attended a number of camps throughout the country this past summer including many in the South including at Auburn, Clemson, Florida State and Georgia. At the Elite 11 camp in California, Moore was able to gauge how he measures up to a number of the top quarterbacks in the country, many of whom are a year older, and he more than held his own.

In only four games on the field (two wins came by forfeit), Moore has completed 67 of 95 pass attempts, for 1,280 yards and 17 touchdowns. He's received 27 scholarship offers including from Michigan and Michigan State.

Despite all of the hype Moore has received, he remains grounded. He's a quiet leader, but a leader nonetheless. As a sophomore he was elected captain, a rarity for any program but especially one as successful as King. 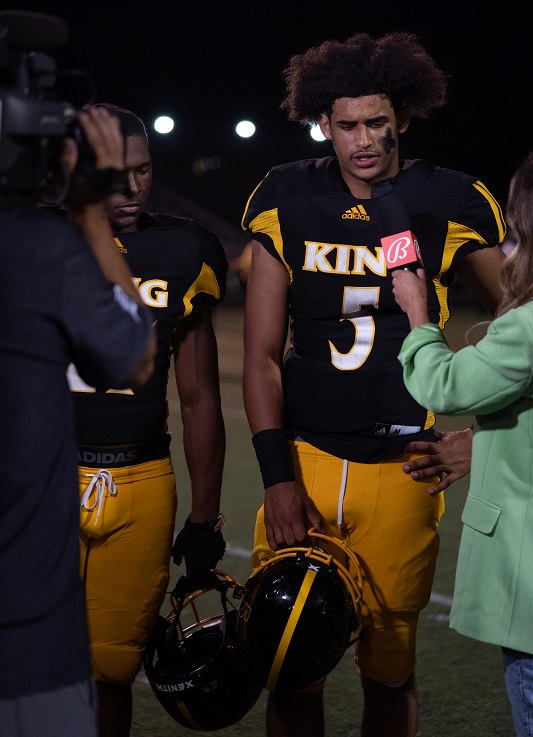 “I remember my first snap (as a freshman) against Detroit Catholic Central at Wayne State,” he said. “It was crazy. Now I'm a junior, and I'm just thankful being with my teammates at a school like King.”

Moore was King's starter from day one, and he remembers well that first game against DCC – a 24-22 defeat against the Shamrocks, who went on to share the Detroit Catholic League Central title.

Life has its twists and turns, and Moore has had his share. Born in East Cleveland, Ohio, Moore and his family moved to Detroit when he was 5. His father grew up in the Detroit area and went to Southfield High, where he competed in basketball, football and track, and job opportunities brought Otha Moore and his family back to Detroit.

But before all that took place, Moore and his family had moved to Lorain, located just west of Cleveland, then they went to live with his grandmother on a farm in Lancaster, located just southeast of Columbus. Too young to be responsible for chores such as milking cows and such, Moore did get a taste of farm life and the early-to-bed, early-to-rise lifestyle.

In addition to football, Moore began playing soccer at an early age. From second grade through eighth Moore was on the pitch either as a goalkeeper or a striker. He credits that sport for improving his footwork. When asked if he'd play soccer if King sponsored the sport, Moore quickly replied yes and admits he misses the game. He does get a few opportunities to show those foot skills; Moore is King's punter and has handled the place-kicking duties at times.

There was a transitionary period, country life to the big city, but Moore said because he's the out-going type, it didn't take him long to make new friends. It was this type of personality that years later would lead to a relationship that would not only grow into a strong friendship, but one that would have a lasting effect on his development as a quarterback.

While working out at a Southfield health club, Moore recognized Devin Gardner – the former Inkster star and Michigan quarterback/receiver – going through his workout. Moore wasn't going miss out on this chance meeting. He introduced himself, and they almost instantly became friends. For the past three years or so, Gardner has worked with Moore, mostly during the offseason. But rarely does a week go by when the two don’t talk about football, school, you name it.

“We talk about anything,” Moore said. “We tell each other jokes. We go to fairs together. He gives me advice on how to be a better man in my life. He's making an impact. He gets me mentally prepared.”

Moore first acknowledges his father as the one who's had the greatest impact in his life – athletically, emotionally and socially. After that, it's his other family – the King coaching staff – who has played such an important part in his development.

First there's Spencer, then there's quarterback coach Jerrell Noland – a former King quarterback (2007 graduate) who played at Kentucky State – and Terel Patrick, King's offensive coordinator. Both Spencer and Patrick coached under one of the icons in Detroit's coaching history, James Reynolds, and Patrick like Noland also played for Reynolds.

“I lean on (Patrick's) shoulder,” Moore said. “He helps me break down film and be prepared. It's not all about football at King. It's family.”

As for college, Moore has placed those decisions on hold until after the season.

“I'm just thankful I have the opportunity to play at a school like King,” he said. “I'm concentrating on the season and winning a state title. At the end of the season, I'll narrow down my choices.”