MARQUETTE — It was a different stadium, but the same end result Saturday as Adrian Lenawee Christian defeated Suttons Bay for the second consecutive season, this time 31-20, to repeat as 8-player Division 1 champion.

But Saturday’s game at Northern Michigan University’s Superior Dome proved a much tougher test for the Cougars, who needed two fourth-quarter touchdowns to finally take down the Norsemen.

“What a tremendous game; my hat’s off to Suttons Bay,” Adrian Lenawee Christian coach Bill Wilharms said. “To make it here three straight years in a row, man what an amazing program coach (Garrick) Opie has.

“To all of the fans, it was so cool in this environment. It was so loud. This is what small-town football is all about. I can’t say enough about the venue and just having the opportunity to be here. I appreciate that a great deal.”

The game couldn’t have started better for the Cougars, as on the second play, Ashur Bryja intercepted a Suttons Bay pass and returned it 22 yards for the opening score. Suttons Bay had multiple scoring chances in the first quarter with drives reaching the Lenawee Christian red zone, but the Norsemen turned the ball over on downs.

The second quarter came with better fortunes for Suttons Bay, with Hugh Periard taking a handoff 90 yards for a score. Shawn Bramer’s two-point conversion run was sniffed out by the Cougars’ defense, and Suttons Bay trailed 7-6 with 6:44 left in the half. Lenawee Christian had a nice drive going inside the Norsemen 10-yard line before a pass was tipped and intercepted at the goal line by August Schaub, and returned it 99 yards for a score. Another Suttons Bay two-point attempt was no good, but the two touchdowns built a 12-7 lead with 4:58 to go in the half.

But Adrian Lenawee Christian didn’t fold because of the momentum changes, and responded with a six play, 65-yard drive capped off with a Bryja 11-yard touchdown run to take the lead back. The Cougars led 14-12 at halftime, and responding to Suttons Bay’s punches went back to being tested throughout the season, Wilharms said. 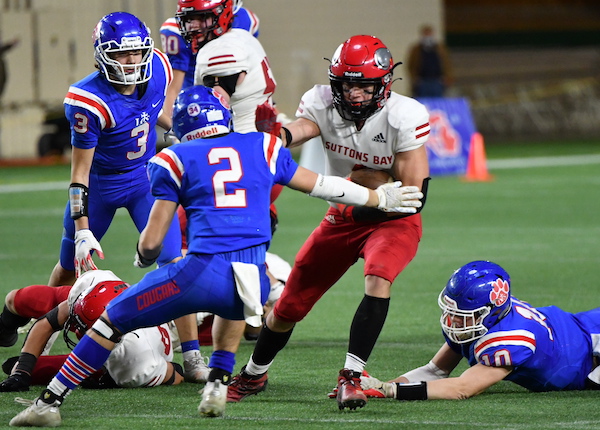 “I think this year, we’ve been tested a couple times,” Wilharms said. “Colon did it to us at their place, we had to weather some storms there as well, so I think we were tested. BD (Britton Deerfield) on the first play of the game in Week 9 comes out and scores on us. These kids have weathered the challenge on it and they understand, they play together as a team.”

Suttons Bay had another turnover on downs in Lenawee Christian territory in the third quarter, which turned into three points for the Cougars as Brady McKelvey nailed a 28-yard field goal to extend the lead to 17-12 with 2:02 remaining in the period.

Defense continued to carry the second half well into the fourth quarter, when the first touchdown of the half was scored with only 6:21 left in the game. Clay Ayers, who battled injury, ran the ball in for the Cougars to extend the lead to 24-12. Ayers was limited to only seven carries, but he showed well when it mattered most.

Suttons Bay fired back just 1:06 later with a deep pass from quarterback Dylan Barnowski to Periard for a 55-yard touchdown to cut the Cougars’ lead to 24-20 after Bramer’s ensuing two-point run. In his third consecutive Final, Periard had 209 yards from scrimmage. In also his final high school game, this loss was the most heartbreaking.

“Obviously, the previous two hurt pretty bad, but I think this one was the most because it’s my last time ever playing football and we were so close to pulling this one off,” Periard said. “So this year’s definitely the worst, in my opinion.”

Any doubt of the game’s finish was put away with a 33-yard run from Bryja to slam the door. Bryja, also Lenawee Christian’s quarterback, threw for 229 yards and ran for 161 and two touchdowns, in addition to his interception return.

At the end of the day, the Norsemen didn’t falter, but it was tough to overcome the Cougars.

“Sometimes you have the cards falling your way, and sometimes you don’t,” Suttons Bay coach Garrick Opie said. “Today was one of those days where timing mixed with lack of execution or otherwise. Or the fact that Lenawee Christian is just a very good team, was just very tough.”

“They’re going to leave as the all-time winningest group in school history. They will have the single-season win record. They will have a ton of stuff,” Wilharms said. “As a collective group, oh my goodness, what a wonderful, wonderful group.”

PHOTOS (Top) Lenawee Christian’s Ashur Bryja (15) breaks into the open on the way to a second-quarter touchdown. (Middle) Suttons Bay’s Hugh Periard (1) makes a cut as the Cougars’ Clay Ayers (2) attempts to wrap him up. (Photos by Cara Kamps. Click for more.)